Snowshoe is an unusual but pleasant combination of sounds. Snowshoe cat is the name of a beautiful breed that was bred quite recently but has already won the hearts of pet lovers around the world. 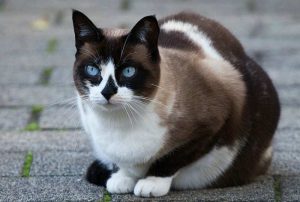 How did the Snowshoe cat breed come about? In the 1960s, in the USA, one of the Siamese cats gave birth to 3 kittens with an unusual color of paws: they looked like white socks. Interested in this effect, the breeders decided to experiment with the breed and crossed the American Shorthair cat with the Siamese. As a result, a new breed was developed – the snow shoo. At first, snow shoos were little known, but now they are quickly becoming popular. They are especially loved in England.

Snowshoe looks very attractive: these are graceful animals with long legs and a massive proportional body, with a wedge-shaped head, similar to an inverted isosceles triangle, which is perfectly complemented by ears with round tips. Animals weigh about 4 kg. The nose can be slightly curved, the eyes are blue or light blue. The tail is of medium length, slightly tapering towards the end. Snowshoe are both short-haired and medium-haired, with thick, smooth and pleasant to the touch coats. 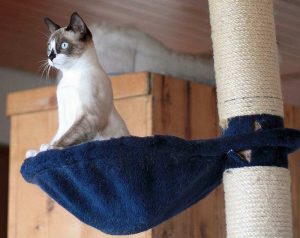 A distinctive feature of Snowshoe cats is their unusual color. Most often, the color of the cover is the same as that of the Siamese breeds: bluepoint (blue-white), seal point (shade of baked milk), and tortoiseshell (black-red shade). The bridge, nose, and chin of cats are usually covered with white hair, which forms a kind of triangle. 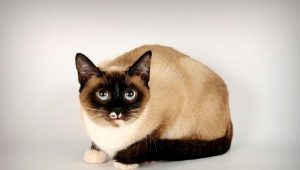 Around the eyes, as well as on the head and chest, the pigmentation is darker, so sometimes this breed is jokingly called “panda cats”. But the main distinguishing feature is the white “shoes” on the front and hind legs. However, the final scale and patterns on the fur are formed closer to 2 years old, so those who have snow shoo kittens should be patient. Also, given such original patterns, you need to understand that it is not easy to bring out the “correct” breed. 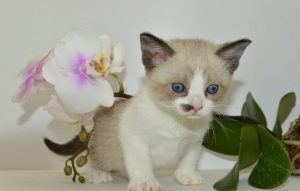 Snowshoe’s personality is also very pleasant. These cats are not as “loud” as the Siamese, but also not as silent as the American Shorthair. Their voice does not hurt the ear, as in the latter, and is more like a melodic Siamese. Snowshoe is a very active and curious cat: because of this, they like to climb higher so that you can follow everything that happens around them. Also, they are very smart and learn quickly: having seen, for example, a door to a closet or bathroom opening several times, they may well try to repeat it and even succeed in it.

From their Siamese ancestors, they inherited a playfulness and some propensity for training: like dogs, they love to return a small object when the owner drops it. But they also love to run away with some necessary thing, as well as hide it, so socks, watches and other accessories should be watched.

At the same time, sleep Snowshoe is very patient and peaceful, which makes them great pets for families with children or other animals. These cats are more attached to a person and devoted to him than their short-haired American or British counterparts, so they do not like to be alone for a long time. They will go after the owner who has returned home and “complain” to him. 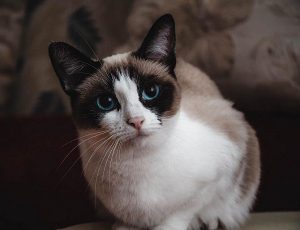 However, they like to “express” their opinion on other occasions, for example, if they run out of food or water. Snowshoe water is adored, especially if it flows: often they sit at the tap for a long time and try to catch the stream, and sometimes they try to drown their toys in their own bowl of water, toilet bowl, or master’s basin.

It is important to understand that the character traits of this animal determine its behavior, and the Snowshoe kitten will become “a kid who tries to try everything.” Therefore, before starting this breed, you should remove all poisonous plants from the house, put nets on the windows, and locks on the doors and doors that are important to you. 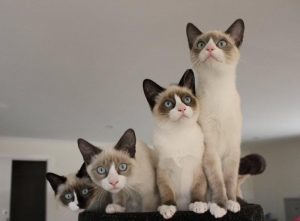 Diseases among cats of this breed are extremely rare. Snowshoe care procedures are quite simple and do not differ from the standard ones. The coat should be brushed weekly (during seasonal molts, you can do this more often).

Periodically wipe your eyes gently with a damp cloth or dry cloth. Regularly trim the nails with appropriate special tools, clean the ears and monitor the condition of the teeth. You need to feed with high-quality dry food – such a diet is completely balanced, in contrast to food “from the table”.

If you love and care for your pet, the Snowshoe cat will become a wonderful and loyal friend who will happily spend time with you and your family.