The Bearded Collie is an ancient shepherd breed of dogs originally from Scotland. It has been used for grazing sheep for more than 3 centuries. It has also proven itself well as a family dog, companion, and sportsman. It will require a lot of attention and regular maintenance from the owner. In view of the character traits, not everyone is suitable. 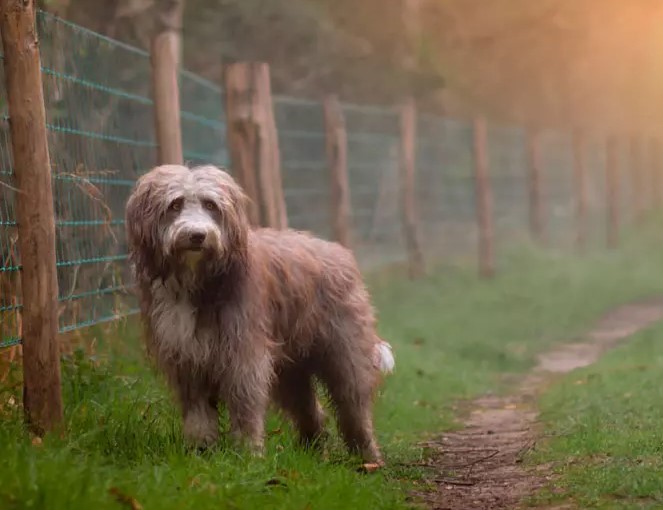 The Bearded Collie is one of the oldest breeds developed in Great Britain. But the use of the dog exclusively as a working dog and the absence of breeding records does not allow it to reliably trace its origin. The first Bearded Collies appeared in the 17-18th century, possibly earlier, but only at the beginning of the 20th century, an attempt was made to standardize the breed.

The history of the appearance of the Bearded Collie is a mix of facts and speculation. According to separate reports and records, it is known that in the late 15th and early 16th centuries there was an active trade between Scotland and Poland. Several Polish Shepherds were brought to the UK at the time. They mixed with local breeds and thus formed a new type of dog, which are the ancestors of modern Bearded dogs. The first written description of dogs in Scotland belongs to the pen of Thompson Gray (the 1880s). In 1912, a preliminary working standard was drawn up in Edinburgh and a breed club was opened.

The First World War caused significant damage to the breed. In the 30s, Cameron Miller took up the revival of the Bearded Collies. If not for her work, the breed could have disappeared altogether. During the Second World War, the number of dogs was greatly reduced again. The loss of interest in them can also be attributed to the death of Mrs. Miller. Another significant role in the history of the breed also belongs to the woman – Mrs. Wilson. In 1944, by good luck, instead of a Scottish Shepherd, she received a Bearded puppy. It was a female named Jenny who captivated Mrs. Wilson with her character and appearance. Soon they found a partner for her – a dog named Bailey Botkenner. It can be said that almost all modern Bearded Collies originated from this pair. The breed was recognized by the International Cynological Federation in 1967. 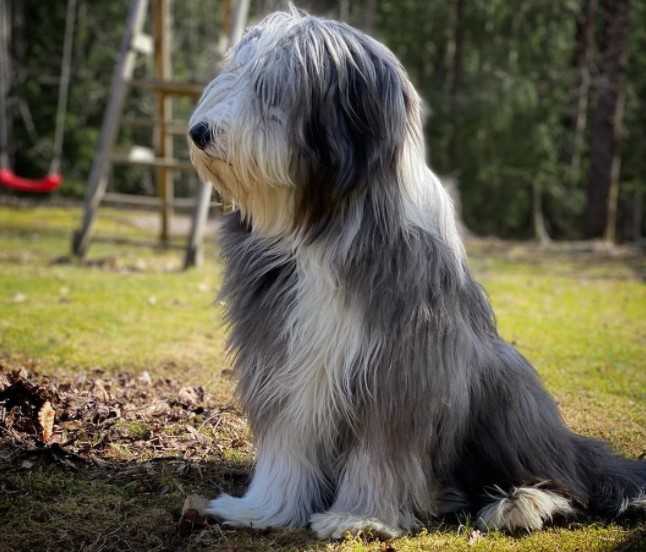 The Bearded Collie is a long-haired dog of medium height, with a dry, slightly stretched body, strong constitution, rather high legs, and not too massive. The height at the withers in males is 53-56 cm, in females – 51-53 cm. The weight of an adult dog is 20-25 kg. The head is proportional. The skull is square, broad, and flat. The muzzle is long and voluminous. The stop is smooth. The nose is square, large, usually black, and can also be blue or brown, depending on the color. The pigmentation of the lips and eyelids is the same as that of the nose. The eyes are set wide, large. Hanging ears, medium size. Teeth white, large, scissor bite, straight is allowed.

The neck is slightly arched, of medium length. The course is strong, slightly longer than the height. The back is wide. The loin is powerful. The chest is deep with rounded, curved ribs. The back is wide. The limbs are straight, well-boned, upright. Feet are oval. The pads are strong, convex. The fingers are compact and tight. The tail is set low, reaching the hock, drooping when calm.

The wool is double. Formed by straight long guard hair, somewhat rough to the touch and soft, dense undercoat. On the head forms eyebrows that do not hide the eyes, beard, and long mustache. There are four colors in the breed:

Each of them can be of a different shade. All colors may have white markings on the muzzle and forehead, neck, chest, tip of tail, and feet. Also allowed are reddish markings on the inside of the ears, cheeks, eyebrows, under the root of the tail, on the paws. 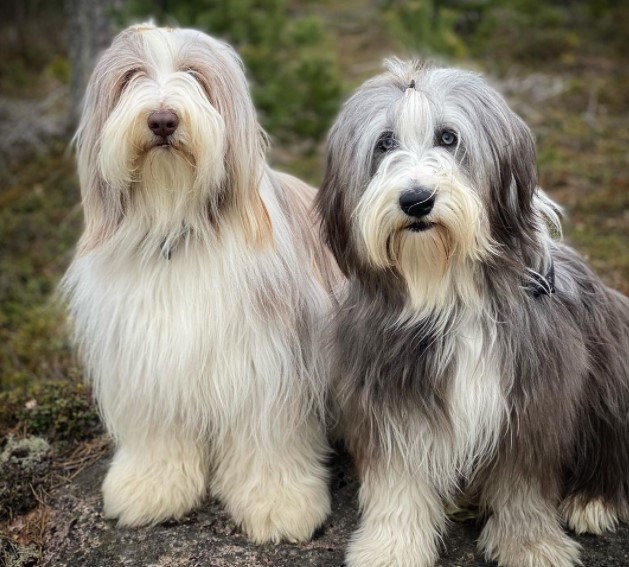 The Bearded Collie is an energetic, balanced, and friendly dog ​​with a pronounced herding instinct, very intelligent, quick-witted, easy to train, and loyal. Strongly attached to the owner and requires a lot of attention. Gets along well with children. It gets along with other pets. Shows no signs of cowardice or aggression in behavior. Bearded Collie treats strangers with suspicion, indifference, or friendly, depending on the upbringing and environment. Will bark, warning of the arrival of guests and suspicious noise. Some dogs are especially talkative. The Bearded Collie is always cheerful and full of enthusiasm, so it is more suitable for active people.

Bearded Collies are often sensitive to loud sounds: vacuum cleaner, kitchen utensils, thunder, motorcycle, and the like. They have exceptionally good hearing. In the process of raising a puppy, competent socialization is very important, during which the dog will learn to behave adequately under various circumstances.

Bearded Collies love to play, often they love the ball and the frisbee. They are not suitable for people who cannot spend a lot of time with them and must not be alone all day long. 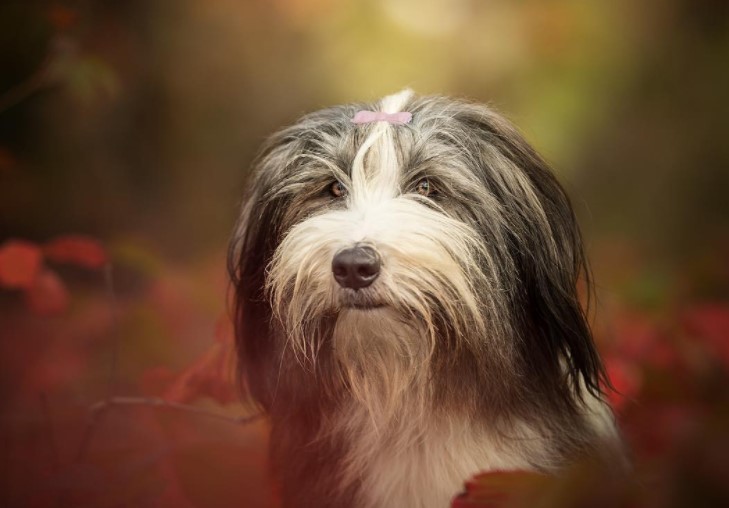 The Bearded Collie does not require complex grooming, but it should be regular and take a lot of time. 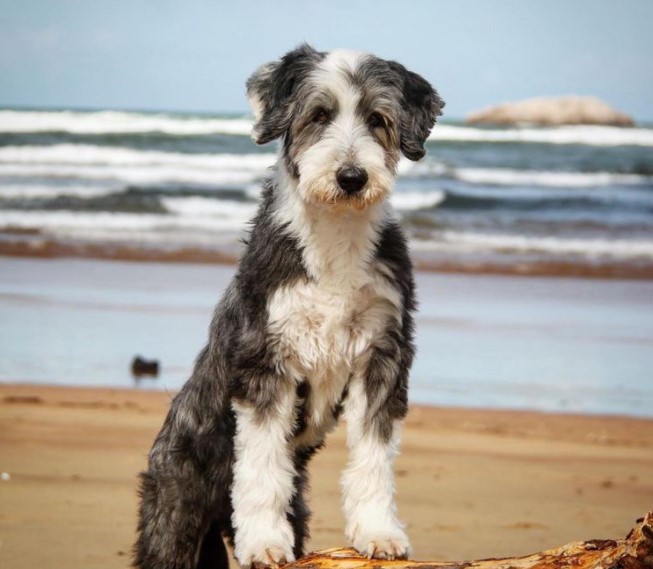 The average lifespan of a Bearded Collie is 12.8 years. According to a survey of owners in the British Isles, Bearded Collies live on average 13.4 years, while their relatives from Canada and the United States live 12 years. The oldest dog, according to the British Kennel Club, was 19.5 years old. The most common causes of death in British Bearded Collies were: old age, cancer, cerebrovascular disease, chronic renal failure, hypoadrenocorticism. The most common hereditary diseases in the breed are: