Bettasplendens are one of the most popular aquarium fish in the world. It can be found everywhere in the aquariums of both amateurs and professionals. And if the former value primarily the beautiful color, unpretentiousness in content, interesting behavior, and ease of breeding of cockerels, then the latter contain a large number of breeding forms, many of which become laureates of specialized exhibitions. 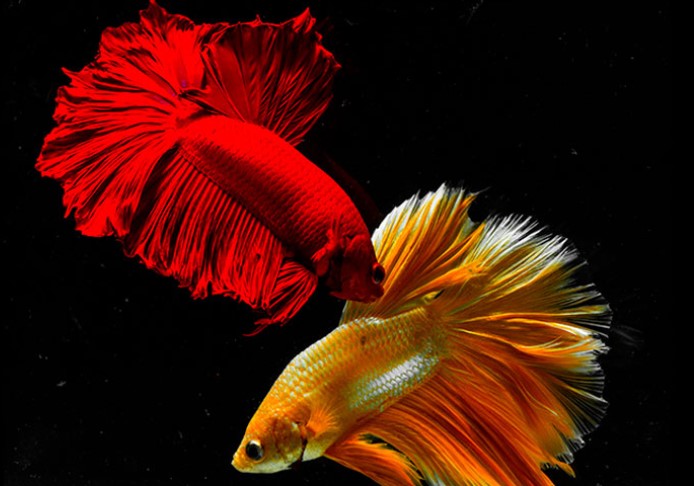 Bettasplendens belong to the suborder Labyrinth fish. Their feature is the presence of a special respiratory organ called a labyrinth. This organ is represented by plates, densely penetrated by blood vessels, and is located in the accessory supragillary plane. Thanks to it, Bettasplendens can use atmospheric air for breathing. This type of breathing is vital for aquarium fish, therefore keeping in a closed vessel, even well saturated with oxygen, leads to the death of the fish. Bettasplendens developed the labyrinth as an adaptation to living in oxygen-poor water bodies. 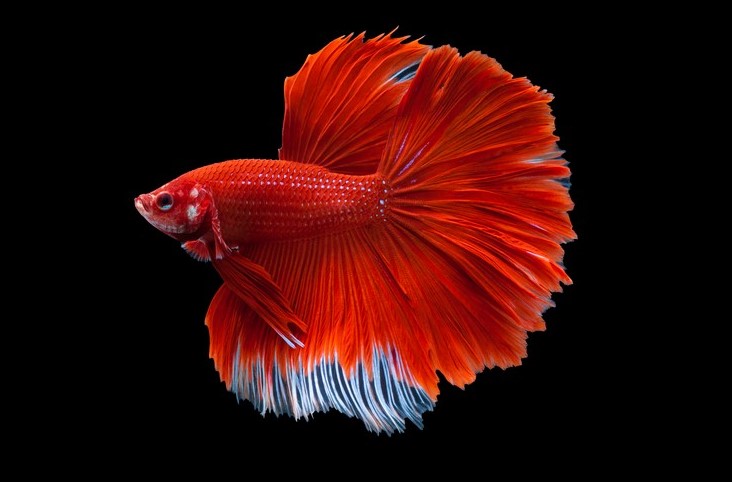 The body shape of Bettas is oval; it is elongated and slightly flattened laterally. Bettas are medium-sized fish. The average length is 5-6 cm, while the females are smaller.
The pectoral fins are pointed, while the dorsal and caudal fins are rounded. In male cockerel fish, fins are more developed than in females. Upper mouth. The natural coloration is usually dark brown with rows of shiny green specks, but in the aquarium, the richness of the coloration of these fish is unmatched. The color of the cockerel scales can change depending on the surrounding conditions: during spawning or clashes with other males, the color intensity increases, and during rest, it weakens.

Modern breeders have bred more than 70 breeds of these fish, differing in color and shape of fins. In aquariums, you can find various variations of black, emerald, blue, red, pink, and white tones. Bettas scales can often be seen playing and shimmering when moving and in bright light.

Depending on the shape and size of the fins, there are about ten varieties of aquarium Bettas. For example, crown-tailed, delta-tailed, double-tailed, and many others. 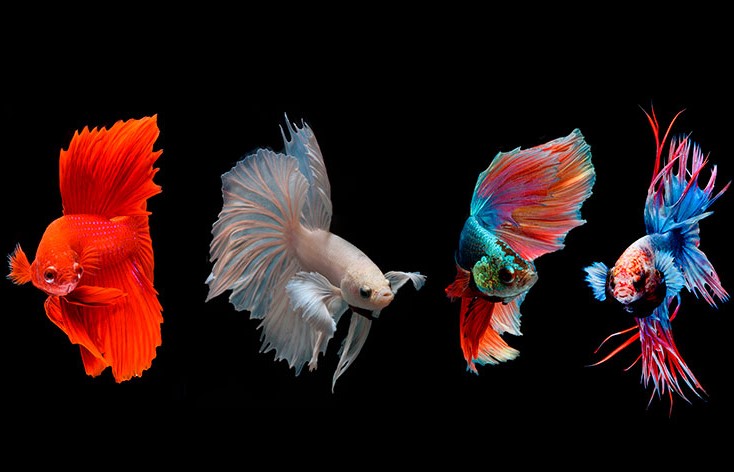 Bettas are home to Southeast Asia. It is here that nondescript natural forms live, which can be found in slow-flowing or stagnant bodies of water in Thailand, Cambodia, Laos, Vietnam, Indonesia, and the Malay Peninsula. Everywhere Bettas are found in the murky and oxygen-poor waters of rice fields, and often even in the sewers of large cities. An additional respiratory organ – the labyrinth – helps Bettas survive in such extreme conditions.

Bettas’ breeding forms have become true cosmopolitans. They can be found in hobbyist aquariums around the globe. Local and international exhibitions and competitions are held on a regular basis, where you can meet the most unusual and outstanding representatives of the Bettas aquarium. 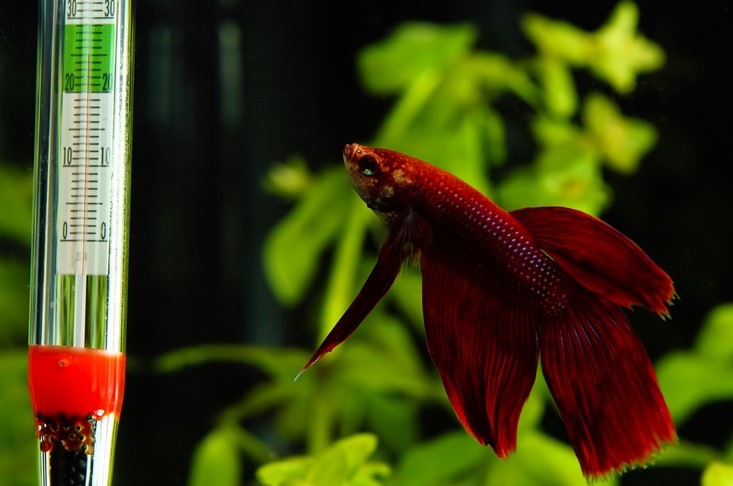 Many hobbyists have started their first steps in an aquarium with the purchase of Bettas fish. This is due to the tremendous endurance of Bettas, the ability to keep an aquarium in small volumes (from 3 liters), and the absence of the need for aeration. However, keeping Bettas in the aquarium should take into account some of the characteristics of this fish.

First of all, you need to decide on the volume and configuration of the Bettas aquarium. The most suitable option would be a classic rectangular aquarium with a volume of 20 liters or more. It will have sufficient volume for the comfortable living of a fighting fish, and will also allow you to install and decorate all the necessary equipment. Keeping Bettas in round aquariums is very popular.

Bettas should not be kept in pairs, in this case, an active male can kill a female that is not ready for spawning. The aquarium should be covered with a lid or net to prevent Bettas from jumping out of it. In this case, females can be kept in groups in one aquarium.

It is best to use dark soil, it is advisable to place it in a layer of 2-3 cm, with such rubble Bettas fish look most impressive and contrasting.

Aquarium Bettas are heat-loving fish, the comfortable temperature for them is 24-26 ° С. It is noted that the higher the water temperature, the brighter the Bettas color. The optimal parameters of hardness and acidity are 2-12 ° and 6.0-7.5, respectively. As already mentioned, Bettas does not need aeration in the aquarium, but it is important that there is a gas exchange with the water surface. It is highly recommended to install a filter in the aquarium to keep the water clear (mechanical cleaning) and safe (reduce the likelihood of accumulation of toxic ammonia and its derivatives). A weekly change of 25-30% of the water is necessary, in very small aquariums it is recommended to change more often – 2-3 times a week. 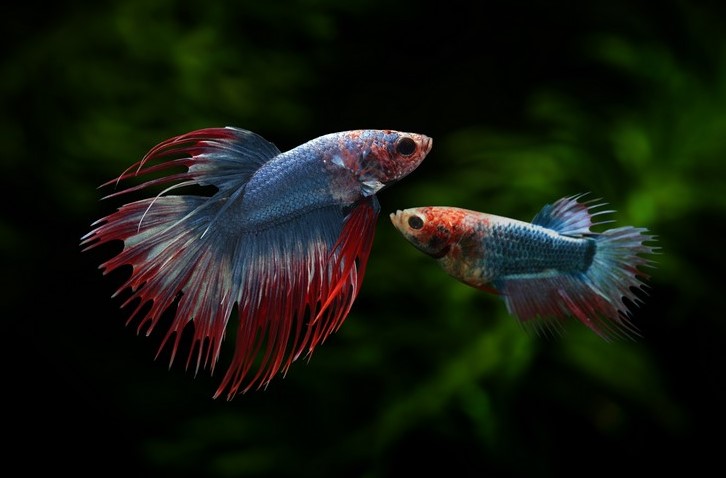 The cocky nature of aquarium Bettas does not mean at all that the path to keeping them in a common aquarium with other fish is completely closed. There are several groups of fish for compatibility with Bettas:

It is important to remember that keeping Bettas with other species is only possible in an appropriately sized aquarium. When putting Bettas into a community aquarium, you need to carefully monitor the behavior of the fish. If other fish are attacking the fins, or the Bettas itself attacks some of the inhabitants, it is recommended to plant it in a separate container. 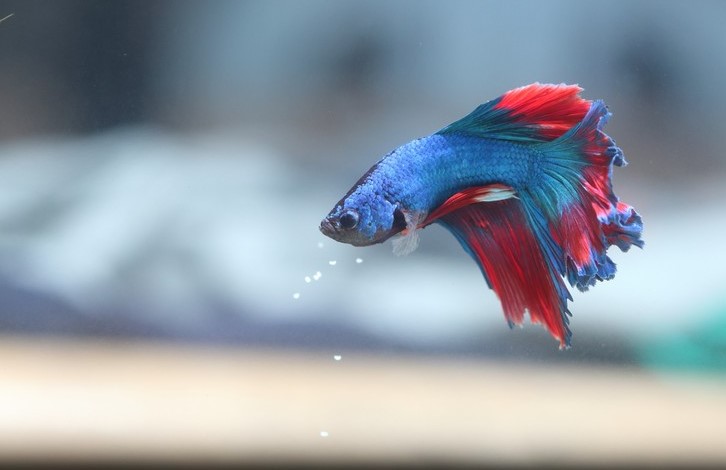 The basis of food for Bettas in nature is aquatic insects and their larvae, zooplankton. Fighting fish do not disdain individual algae. When kept in an aquarium, feeding problems for these fish usually do not arise. The best staple foods are Tetra’s complete dry foods. The company’s specialists have developed special food for fighting fish that meets their nutritional needs. 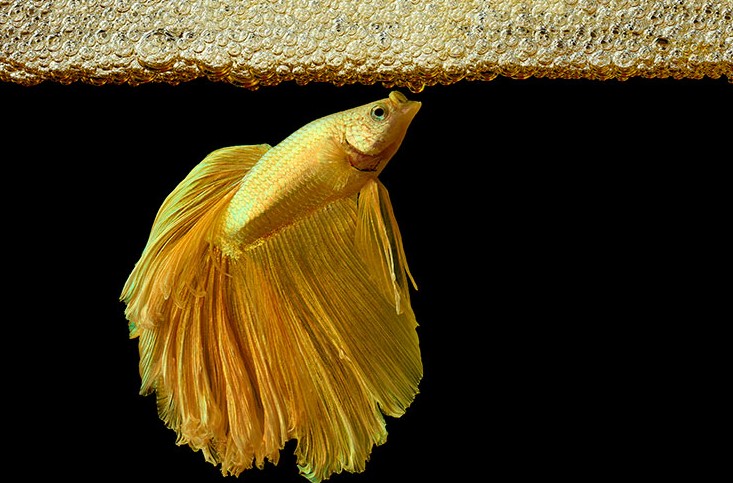 Breeding aquarium Bettas is easy, even for beginners. Fighting fish have a pronounced sexual dimorphism, i.e. there are significant differences between males and females: males are larger, with well-developed fins and bright colors, females are much more modest in appearance. Bettas become sexually mature at 3-4 months. It is worth noting that in a female that has not multiplied for a long time, eggs can turn into a tumor and lead to death, so the fish sometimes need to spawn. In males that have participated in inbreeding, the fins become longer. It is not recommended to plant elderly cockerels for spawning.

Fighting fish can spawn in a common aquarium, but it is recommended to have a separate container for this purpose. Bettas fish are placed in a spawning box with a volume of 20 liters or more. The water level in the aquarium should be 10-15 cm. Using the thermostat, raise the water temperature to 28 ° C. You should also add some floating plants with small leaves (duckweed, pistia) and small shelters for the female. It is not recommended to put soil on the bottom: male Bettas
it will be difficult to pick up eggs that have fallen from the nest. Aeration is also unnecessary, the jet of air bubbles can destroy the nest. Up to 200 eggs can be laid during one spawning, but usually, no more than 1/3 survive.