Small neon fish will certainly become a decoration of any aquarium. These fish belong to the order Characiniformes and are close relatives of the well-known piranhas. But unlike their predatory counterparts, neons are absolutely calm and peaceful fish that is unlikely to offend their neighbor.

Aquarists appreciate neons not only for their ability to get along with most species in a common aquarium but also for the unusual coloration of these underwater inhabitants. A distinctive feature of all neons is the presence of a special shiny strip along the body, which flares up like a light in reflected light. It is so bright that it resembles the lights of neon advertisements in the night city. For this, the fish got its name. 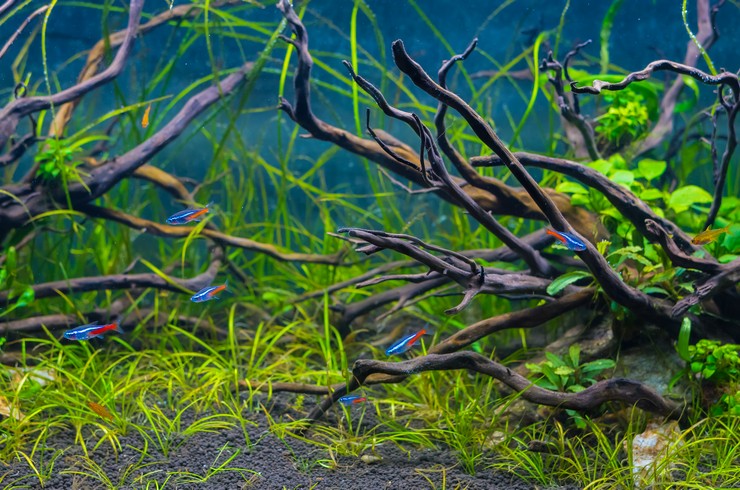 Professional designers are very fond of neons for their small size, not distracting from the main picture, an activity that gives liveliness to the entire design, and indifference to plants that will retain their shape and beauty. The flocks of neons themselves look very impressive against the background of dense green vegetation.

The question of why such a bright color of a small defenseless neon fish is needed remains unanswered. Perhaps this is necessary to establish a hierarchy in the flock, perhaps confusing predators who decided to attack a flock of neons. There is a theory that such light effects allow neons to find each other in the darkened water conditions typical of typical biotopes. Some aquarists believe that neons are capable of glowing themselves, but, unfortunately, this is a misconception: stripes of neons only reflect and refract light rays falling on them.

Keeping neons in a home aquarium will not be difficult, the main thing is to create optimal water parameters for the fish, regularly maintain the aquarium and feed it with high-quality food.

All neons are small schooling species. The size of fish rarely exceeds 4-5 cm. Neon males are smaller than females. The body is elongated and slightly flattened at the sides. The mouth is small. The fins of the neon are transparent, the anal fins are longer than the dorsal. Like other characin fish, neons have an extra adipose fin. It is an unpaired organ located behind the dorsal fin. It has no bone rays and consists of adipose tissue. Each fish has a longitudinal neon strip on its body, which reflects light and creates a glowing effect. It is formed by special cells – chromatophores – located under the scales.

The neon strip in neon females has a small break in the middle, in males, it represents a straight line. 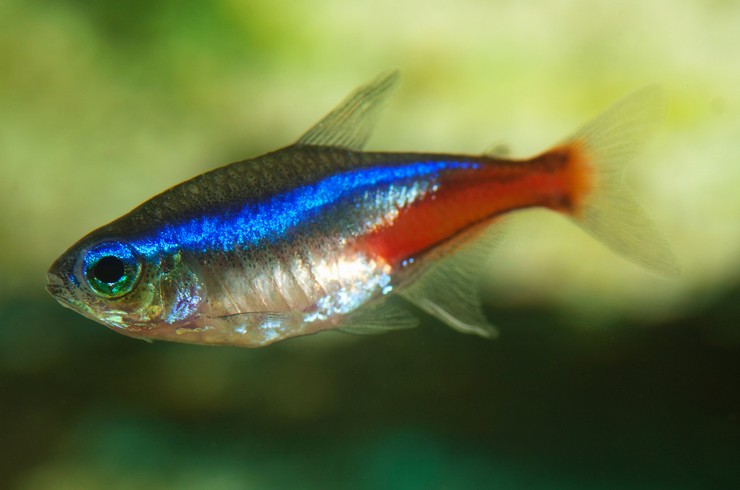 The history of the discovery and appearance of neon in amateur aquariums is closely related to the French explorer and adventurer Auguste Rabot. It was he who first discovered small glowing fish in the Putumayo River (Peru). He was simply mesmerized by the beauty of these creatures and decided that he could earn big money by exporting such a miracle. In 1935, the first neon was shipped to the United States of America and Europe. Aquarists of that time loved the fish madly, the demand for it skyrocketed, and now Rabo is already becoming the world’s only supplier of neons to the Old and New Worlds. It was not possible to propagate neons in captivity for a long time, so the monopoly existed for a relatively long time. One of the first copies was donated for advertising purposes to William Innessy, a hobbyist and popularizer of the aquarium hobby. He, in turn, passed on the fish to his friend George Myers, who made the first scientific description of a new species – blue, or ordinary neon, which he named after his comrade Hyphessobrycon innesi. Later the species changed its name to Paracheirodon innesi.

Red neon (Paracheirodon axelrodi) was discovered only in the middle of the 20th century. The descriptions were made in parallel by two scientists – Myers and Schultz. But the latter published his work earlier, so the name that he gave to the fish in honor of his friend the aquarist Herbert Axelrod was fixed in the nomenclature.

In 1963, Jacques Gehry discovered another type of neon – emerald neon, or neon simulator. The sample he caught was very similar to red neon, but a further study led to the separation of these fish into a separate species. Gehry also conducted a systematic revision of neons and attributed them to the genus Paracheirodon, as they are called to this day.

It was the first time in Germany to get offspring from neons in captivity. This happened by a happy coincidence and was due to the fact that this country has very soft water, which was used to contain neons. In the beginning, neon spawning was called the “German miracle”, but the first studies revealed the mechanisms of the influence of water parameters on the reproduction of these fish. From this point on, neons become available to all aquarists in the world.

Nowadays, fish are massively grown on special farms in Southeast Asia. Although occasionally there are also supplies of neon savages caught in the natural environment.

The homeland of neons is South America. It is here, in the region of the basins of Paraguay, Rio Takuari, and Brazil rivers, that these amazing fish can be found in their natural habitat. Neons do not like fast currents and prefer to live in slow-flowing tributaries of large rivers, the waters of which are rich in humic substances, which gives them a brown tint. These rivers usually flow under the canopy of tropical rainforests, which creates twilight in the water. Decaying leaves, regular rains, a large layer of silt make the water soft and acidic.

All neons are schooling fish, so you need to keep them at least 6-8 pieces – so they feel comfortable and look spectacular. When kept alone or in pairs, fish can lose their tone and color, and the life span will be noticeably reduced. For such a number of fish, an aquarium of 50 liters or more is required. 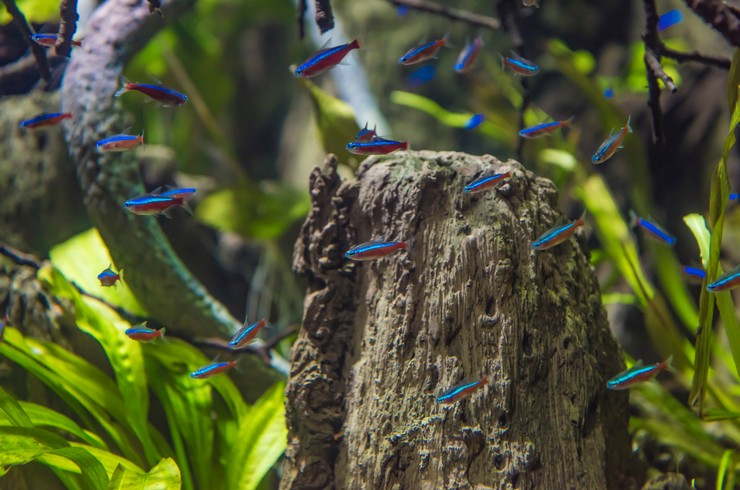 You can choose any soil you like, for example, dark sand or dark pebbles, against their background the fish will look very beautiful. A lid in an aquarium with neons is optional, they rarely jump to the floor. Neons love dim lights, it is advisable not to put especially powerful lamps in the aquarium – this can cause a feeling of stress and a desire to hide in the shelter.

It is not recommended to release neons in a freshly launched aquarium, they prefer an already established balance. Optimal water parameters:

The higher the temperature, the lower the life span of the fish. On average, neons live in an aquarium for 3-4 years.

The aquarium should be equipped with a filter of appropriate power, thanks to which mechanical and biological water purification will be carried out. A compressor is also welcome.

To maintain optimal water quality, it is necessary to change 25-30% weekly, together with a soil siphon. Tetra ToruMin Conditioner can be added to the water to create a natural blackwater effect.

In the aquarium, it is recommended to make zones with dense vegetation – a variety of long-stemmed plants (elodea, Vallisneria, hornwort, Cabomba, etc.). Snags submerged to the bottom, shards from pots will look good. Small fish really need shelter to hide there in case of danger.

Perhaps, neons are one of the most peaceful ornamental fish and will become good neighbors for other peaceful medium-sized species. They will live equally well both with guppies and another viviparous fish tooth and with cardinals, rasbora, tetras, barbs, corridors, ancistrus. 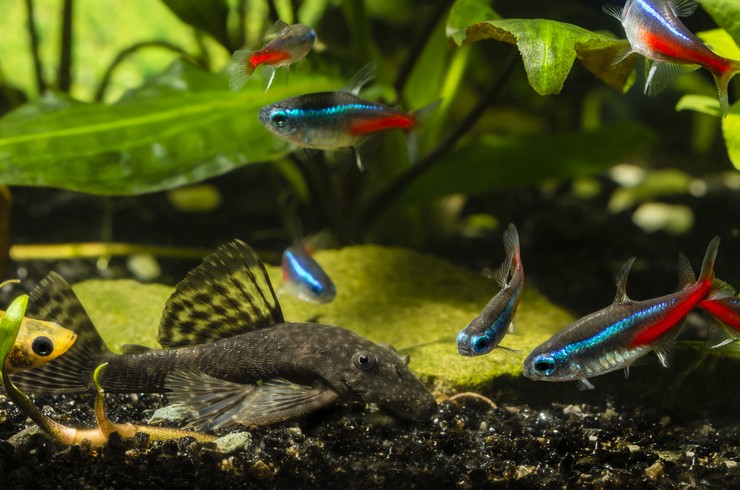 Of course, you can’t plant neons with predatory and territorial fish. Their glowing strip acts on such species, like a red rag on a bull, and most likely neons will very quickly become someone’s dinner. It is also not recommended to contain neons with large fish, for example, gold. If the neon can fit in the fish’s mouth, it can be eaten.

The only time when neons can be aggressive is spawning, but it is better to place pairs ready for breeding in a separate spawning aquarium.

Correctly selected food plays a huge role in the life of fish. It should be nutritious, containing all the essential vitamins and minerals, and in a form that is easy to eat.

Neons are small fish that prefer the middle and lower layers of the aquarium. Tetra feeds are perfect for their nutrition: