If you decide to enroll in the ranks of aquarium crayfish, then starting your experience with a blue Cuban crayfish will be the right decision. The maintenance of this animal will not cause difficulties even for a beginner. Nevertheless, crayfish have some nuances of content that are different from those of aquarium fish. Read about how to make your pet’s life as comfortable as possible at home in our article.

The blue Cuban crayfish (Procambarus cubensis) is a freshwater crustacean from the order Decapod crayfish. This arthropod, originally from the reservoirs of the island of Cuba, came to our country in 1980. The long history of keeping and the appearance on the market of other aquarium crayfish has not made it less popular among hobbyists, and you can easily have it in your home aquarium.

Blue Cuban crayfish are some of the most interesting animals to observe. If the aquarium contains several individuals of this species, then with enviable regularity one can observe clashes between males for territory and females. At the same time, the crayfish raise their claws up and spread them apart, trying to intimidate each other. It’s funny to watch crayfish find food or awkwardly try to catch swimming fish (although sometimes they do it).

Crayfish are real aquarium orderlies. They will not only eat the remnants of fish food or dying parts of plants but also do not disdain the dead fish. However, crayfish should not be grazed, of course.

The content of the blue Cuban crayfish will give you a whole storm of emotions and funny memories. And you can also practice raising young crustaceans because they easily breed in captivity. 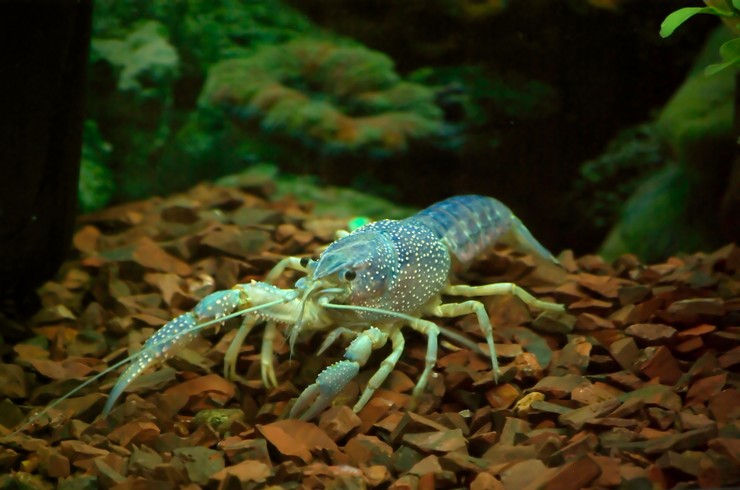 The external structure of the blue Cuban crayfish is not fundamentally different from most other crayfish. The body consists of two sections: the cephalothorax and abdomen. The first section is covered with a dense shell, here are the sensory organs – eyes and antennae, as well as walking legs and jaws. The first pair of walking legs in crayfish has been modified into powerful claws that help dig in the ground, intimidate rivals and hold the female during mating.

The abdomen of the blue Cuban crayfish is mobile and consists of articulated segments. In their lower part, there are legs – pleopods, which are used for swimming, and by females also for bearing eggs. The abdomen ends with a wide, five-lobed caudal fin.

What especially attracts aquarists visiting Cuba is body color. In adults, it is represented by various shades of blue. It is worth noting that this refers specifically to grown-up individuals, young crayfish have a nondescript gray coloration, and many may even consider that under the guise of a “thoroughbred” crayfish they are trying to offer them an ordinary river crayfish. Cuban blue crayfish gains its full color only at the age of 1.5-2 years and in the case when all conditions in the aquarium are comfortable. The intensity of the color also depends not least on the correct and balanced nutrition of crayfish

Blue Cuban crayfish are quite small arthropods, in an aquarium, their size rarely exceeds 12 cm.

Life expectancy is about 3 years.

The natural habitat of blue Cuban crayfish is the water bodies of the tropical island of Cuba. They live here in small lakes, ponds, streams with clean and warm water. They prefer to hide in various shelters, for example, in flooded tree roots, under driftwood lying at the bottom.

To ensure the best conditions for your blue Cuban crayfish, you should start by choosing the right aquarium. It is desirable that for one crayfish there are 20-30 liters of water. In 100 liters, you can already contain a whole group. The bottom area is more important than the height of the aquarium.

A thick layer of coarse quartz sand or small pebbles can be used as soil. It is very important to create as many shelters as possible in the aquarium. This will generally reduce tension in the group, but most importantly, it will help crayfish to transfer molt without damage – changing the old cover to a new one. For these purposes, grottoes, hollow tubes, coconut halves, ceramic flower pots are used. Driftwood can be installed so that they look out of the water a little because sometimes crayfish get out to the surface. Just make sure that they do not have the opportunity to escape from the aquarium. 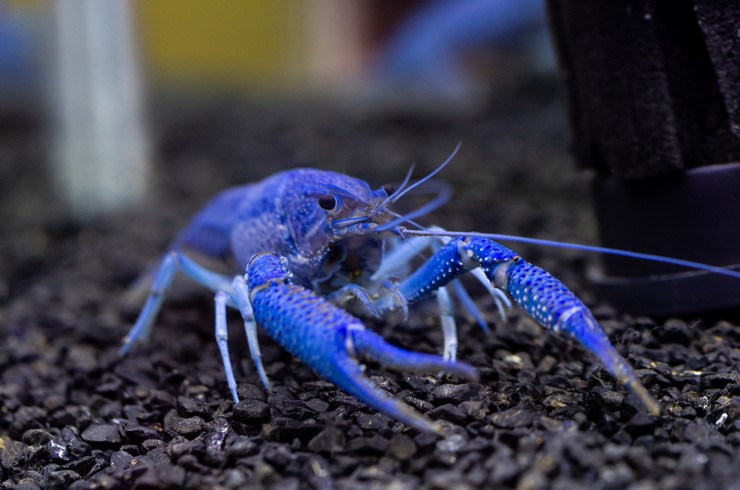 A blue Cuban crayfish aquarium should be equipped with a good filtration and aeration system to maintain the water quality at the proper level. Once a week, you need to change 20% of the water in the aquarium. Most often, tap water is used for these purposes, but remember that it is not suitable for the life of crayfish, and often may contain hazardous compounds – chlorine, copper, etc. Therefore, before pouring fresh water into the aquarium, add Tetra Crusta conditioner to its AquaSafe, which makes it instantly safe for your pets.

It is very important that the water in the aquarium is not too soft, because in this case, the crayfish will not have enough substances to build its chitinous shell.

Plants with a powerful root system (Echinodorus, Cryptocorynes) can be planted in an aquarium with blue Cuban crayfish, although it is better to limit access to them with the help of large stones. Suitable for landscaping an aquarium and anubias, their tough leaves are not to the taste of crayfish. Small-leaved plants are usually quickly eaten by crayfish.

Molting is a very important stage in the life of every crayfish. The rigid outer skeleton does not allow growth, so they have to shed the old cover. A new one is formed under it, but it is soft, so during the time until it hardens, the crayfish grows in size. In the first year of life, the blue Cuban crayfish sheds up to seven times, in the second – half as much. Molting not only allows crayfish to grow larger but also helps in the regeneration of lost limbs, which are often lost in internecine fights.

The compatibility of Cuban blue crayfish with other aquarium inhabitants is controversial. If we take a species aquarium with a group of crayfish, then here, after some “war”, territory boundaries will be established between the males, which are usually not violated by other crayfish. If an invasion takes place, then the owner rather rigidly protects his territory, to the extent that the offender may be left without a claw or leg, which, however, will then recover. 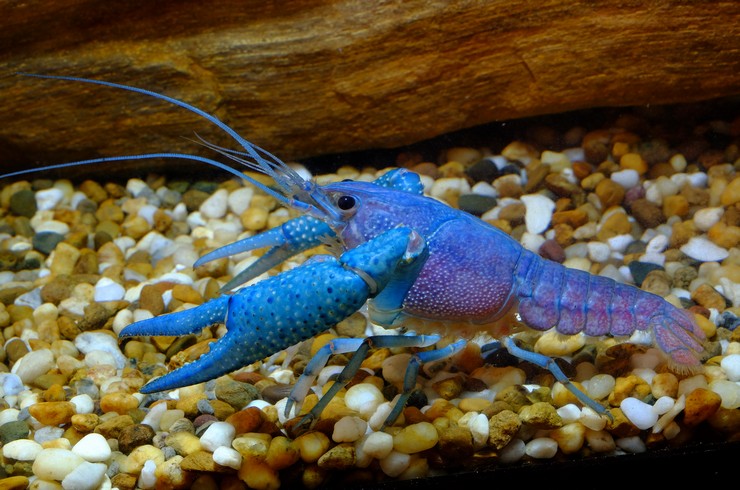 If you consider the possibility of keeping a blue Cuban crayfish with fish, then it is important to choose the right roommates. The fact is that in the daytime crayfish usually do not react to neighbors swimming around, but in the evening when the fish lie to the bottom and become less active, the crayfish can attempt to hunt them. Therefore, only moving medium-sized fish are usually selected for neighbors. These can be barbs, iris, mollies, etc.

Large aggressive fish can be dangerous for the crayfish itself because they do not mind eating crustaceans during molting.