A Doberman with a blue coat is almost impossible to meet on the street or to see him taking part in an exhibition or competition. Puppies of this color cannot be booked with the breeder. This is because blue Dobermans are considered a rarity, and German Doberman Pinschers with a similar coat color are only used in America for breeding. 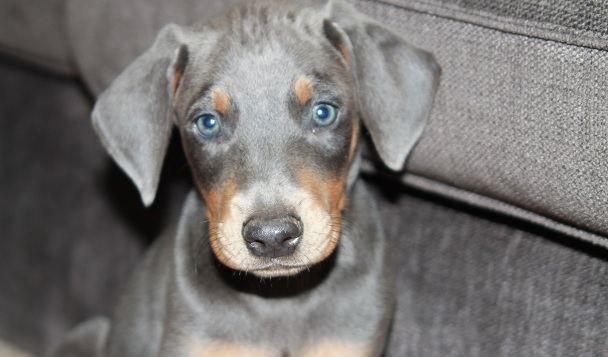 As you know, the man who bred a new breed of service dogs – a tax collector from Germany named Karl Dobermann, did not keep any breeding records. Only modern scientists managed to find out that the genes of many other guards, hunting, and fighting dogs are present in the blood of the representatives, named after the creator of the breed.

The Dobermann himself liked dogs with a black coat, on which there were red marks on the paws, head, chest. He saw this color in miniature pinschers, which are often confused with Doberman puppies and are believed to be descendants of German pointers, but this is not so. The Miniature Pinschers are much older than the Dobermann breed.

As for individuals with a gray coat, the dogs owe them to the Weimaraners and Great Danes who took part in the selection. Since 1901, gray was even fixed as the main color by the standard of appearance, and puppies born with a similar feature were allowed for breeding, participated in exhibitions, etc. But studies conducted at the end of the 20th century proved that all gray-haired Dobermans have a gene that is responsible for the development of certain skin diseases. Because of this, in 1994, gray wool was excluded from the official standard.

Today, even if a pair of black or brown dogs has a blue-colored puppy, it will not be allowed for further breeding. This will be noted in the puppy’s medical records. Breeders do not give any guarantee about the health of such a dog and what problems it may have with development and psyche in the future.

People who were owners of Dobermans with a similar trait distinguish both positive and negative in their character and appearance. The benefits include:

the ability to raise a good protector and guard from a puppy;

calmness and equanimity in a calm home environment;

Among the negative characteristics are:

inability to be kept on the street;

Like other representatives of the breed, blue Dobermans need a strong hand of the owner for education and training. The owner must gain credibility and keep him from the first to the last day of living with the dog in the same territory.