Previously, it was almost impossible to meet a Doberman with brown hair. Dogs with black color and tan markings were especially popular. But today it is precisely such Dobermans that are becoming the most popular because of their unusual appearance, which attracts other people’s attention. 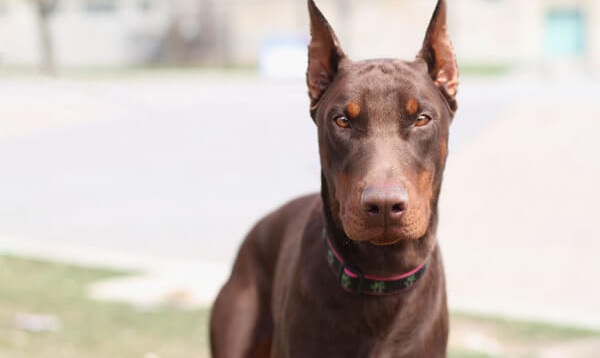 From the very beginning of the birth of their breed, Dobermans were only black and tan. They inherited this exterior feature from Rottweilers, Pinschers, and Terriers. But since the moment the first puppies with chocolate and blue wool were born in 1901, the list of colors characteristic of the breed has been replenished with two positions.

The brown Dobermans were the same as their black-haired brethren. They were in no way inferior to them in terms of work or physical characteristics. Both those and those representatives of the breed were very smart and quick-witted, but for some reason, only black dogs were still involved in the police work. Because of this lack of demand, brown Dobermans have long been considered a real wonder and they could only be found at the exhibition.

As time went on, the breed became more and more popular and the chocolate-colored dogs began to be interested more and more often. Having gained popularity, they began to be used as guards and companions. At exhibitions, Dobermans with brown wool take only prizes, as they look simply stunning.

By itself, this coat color is not considered a defect. But if the shade is too light, a puppy born with such a feature of appearance will not be allowed to breed for breeding.

black-brown where “background” is the color of dark chocolate;

chocolate, in which the hairs are colored in a shade of milk chocolate and tan is required;

red, characterized by an intense red or chestnut shade (if there is no tan, the dog is out of breed).

Important! Brown with white spots automatically puts the dog on the cull list. Even the presence of markings will not make the spotted dog an exhibition representative of its breed.

Brown Dobermans need strict training and physical activity just like their brethren with different shades of wool. There is no difference in the rules of care, maintenance, and feeding. Chocolate Doberman Pinschers live, like everyone else – from 12 to 13 years old.