Doberman Pinschers, recognized as one of the best breeds of service dogs, have several serious competitors among their brethren. Most often they choose between two Germans: a Doberman and a Shepherd.

It is only in action-packed action films that these four-legged are presented as ruthless killers, whose teeth grow in several rows, almost like sharks. In fact, the German Doberman Pinscher is a very smart, kind, and loving dog that will find a common language not only with an adult owner but also with his small child. But do not forget that positive character traits can go to the second, and even the tenth plan, if the dog is not trained and educated.

Doberman Pinschers are one of the most versatile breeds you can find. A properly trained animal can be a good helper for the military, police, and rescuers. You can even make a nanny or a nurse from a Doberman. But the main purpose of the German Pinscher is still to serve its master.

Important! Dogs of this breed have an excellent physical condition. They are able to win a victory in sports competitions and catch up with the attacker.

German Shepherds are the standard of service dog breeding. They are calm and self-possessed, but at the same time fearless and reckless. They are easy to educate and train since a dog with the highest intelligence is focused on unconditional obedience and service to its owner. Shepherd dogs are most often involved in work in security agencies, social security agencies, and special services.

Important! The only canine craft that the shepherd could not fully master is hunting.

From a shepherd dog, you can make an excellent companion and loyal friend. She can be safely entrusted with the protection of the house and property. With such a pet, you can let children go for a walk, leave elderly people in their company, or take them outside to places where other dogs are walking. So do not give up the idea of having a shepherd dog in a family where small children are growing up and there are other pets. 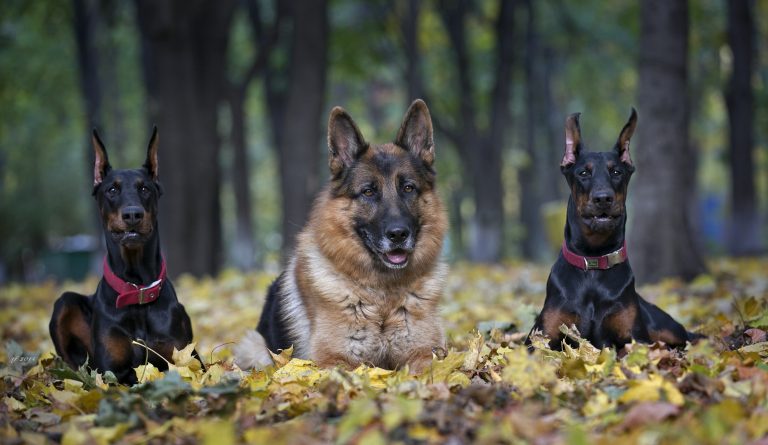 Both the Doberman and the German Shepherd have a number of positive and negative qualities and temperament traits. The pros of a Doberman over an opponent include:

the hair sheds less and practically does not smell;

that it is suitable for keeping in a city apartment;

that it has an attractive appearance.

the need for tough training;

lack of undercoat, which allows you not to freeze on the street in the cold season.

The German Shepherd also has features that make it both better and worse than Dobermans. The positive aspects include:

the ability to establish contact with children, dogs, and cats;

that even a bad upbringing will not spoil a German shepherd;

the possibility of keeping in an aviary.

There is something in common between the two “Germans”:

they are very loyal to their owners;

dogs are intelligent and well trained;

know-how and love to be cunning in a situation favorable to them;

It is difficult to say who is better and stronger – a Doberman or a German Shepherd dog. When making a choice between two breeds, you need to focus on what the dog will be used for – security, service, or home maintenance.