Chinese Crested is an active and very cheerful decorative dog that is distinguished by a strong affection for the owner. There are two varieties of the breed “downy” and naked. Depending on the characteristics of the constitution, they are conventionally divided into two types. Deer-type dogs are distinguished by light and thin bones, while stocky or “ponies” are calmer, confident with a heavy bone. 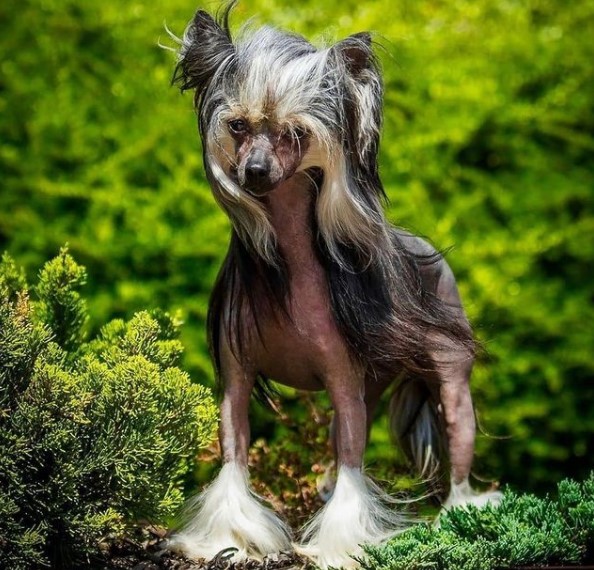 The country of origin is considered to be China. The Chinese Crested Dog breed is very ancient, according to some sources, its breeding began in the 200s BC, but, despite this, there is no reliable data on the origin.

According to one version, these dogs once lived in the wild and were domesticated by humans, and hairless individuals appeared in a hot tropical climate.

There is no evidence that they originated in China. The special similarity between the Chinese and the Hairless Mexican dogs, as well as some research, allowed us to put forward another theory of origin – the Mexican, according to which the Crested Dogs first appeared in Mexico as a result of the crossing of the local naked Xolo with the Chihuahua.

Reliable information about the breed appeared only in 1966 when unusual dogs were brought to England from the USA. And it was here, in foggy Albion, that a standard was developed for them, and the country became the main breeding center. 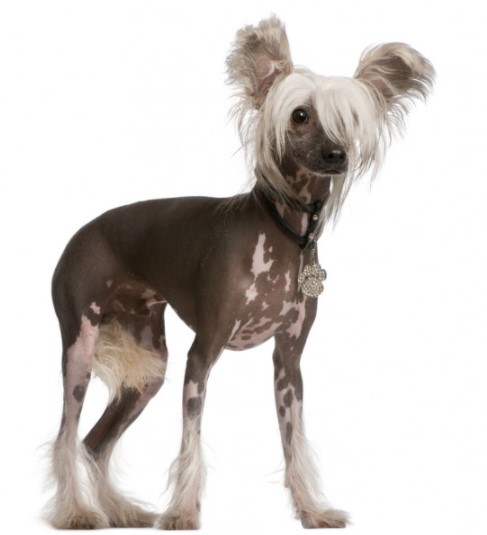 The Chinese Crested is a slender, active, and elegant dog. The movements are smooth, energetic. The head is wedge-shaped. The eyes are set wide apart, almond-shaped. Depending on the color, the eyes and nose can be light or dark. The ears are large, erect, and uncropped. Straight or scissor bite. In naked dogs, incomplete teeth are allowed, and in “downy” dogs it is considered a defect. The chest is deep, the belly is tucked up, the loin is convex. Thin and long tail. The limbs are long, straight, set parallel. Toes and nails are slightly elongated.

Hairless dogs have patches of hair only on the head, tail, paws, and sometimes ears. The coat is flowing, long. “Downy” are completely covered with hair of moderate length, not too thick with a good undercoat. Excessively curly and heavy hair is considered a blemish. The color range is very wide, from monochromatic to spotted and marbled in any shades and combinations. 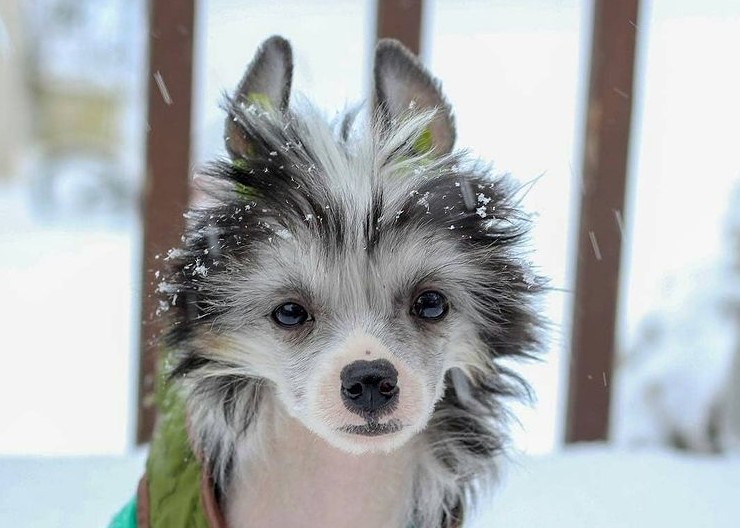 The naked representatives of the Chinese breed were never instilled with a hunting instinct and were not used as guards. Their ancestors in ancient times were honorary participants in religious rituals. And in the modern world, the breed was bred as decorative. All this served as the basis for the formation of character.

Representatives of the Chinese Crested breed have an affectionate playful disposition, they are very loyal to the family and are always friendly, including towards strangers. They are very sociable and try to get maximum attention, therefore they are not suitable for people who are constantly busy at work. Chinese Crested is quite temperamental, sociable, and friendly. They get along well with other animals, but sometimes they are jealous and nervous if they are given less attention. They are very attached to the family and very hard to endure being separated from it or changing the owner.

The owners of these dogs say that their pets love to cuddle and cannot do without communication with people. The Chinese Crested Dog is especially close to the owner and sometimes singles out another family member. An incredibly loyal pet greatly yearns for loved ones who have left home and may wait a long time for the return of the owners or try to look for them. They need constant attention from humans, and animals left alone for a long time fall into a prolonged depression.

This dog requires constant communication, it will benefit from new acquaintances with animals and people trips to new places. A pet deprived of this will grow up fearful and timid. Bored or angry with the “uninteresting” life, the Chinese Crested may begin to bark loudly or whine, which is usually not typical of the representatives of this breed.

Excessive chewing of objects is one of the serious problems with this breed if the dog is left alone for a long time. Constant attention from the owner and the selection of toys for chewing will help prevent or stop the erasure of the pet’s teeth. 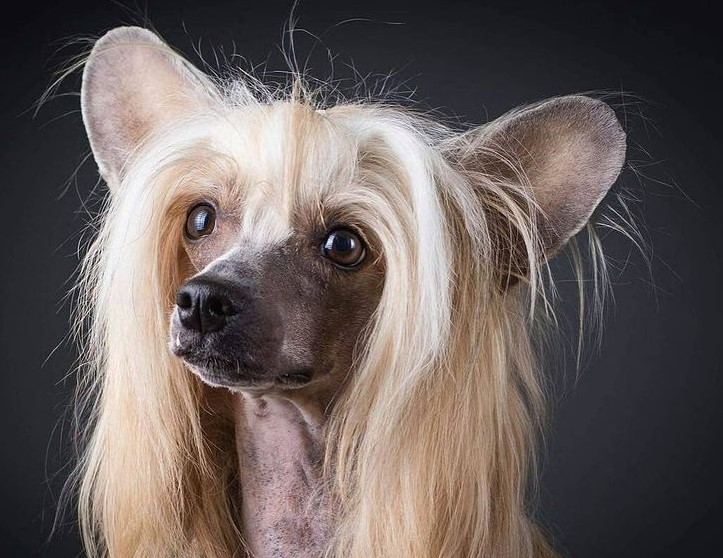 Caring for the naked and “downy” Chinese Crested is practically the same. The Chinese Crested Dogs are combed daily or every other day. They bathe 2-3 times a month, using a special shower gel on bare areas of the body and restoring shampoos for wool, which add volume. It is important that all cosmetics are hypoallergenic. Their claws grow a little faster than other breeds and do not have time to wear off, so they need to be trimmed periodically. These dogs, especially hairless ones, have very bad teeth that need regular brushing. “Downy” practically do not shed on their own, and so that the undercoat does not get lost in mats, it must be well combed out. After bathing dogs with shampoo, it is recommended to use a conditioner.

The Chinese Crested Dog, overeating and little movement, can quickly gain excess weight. Therefore, animals of this breed need to be “spurred” more often to move, especially since they like to walk and play on the street. Care should be taken to ensure that the naked Chinese Crested Dog does not accidentally damage its unprotected skin while walking. In extremely cold or hot weather, it is better not to walk such a dog to the toilet outside. 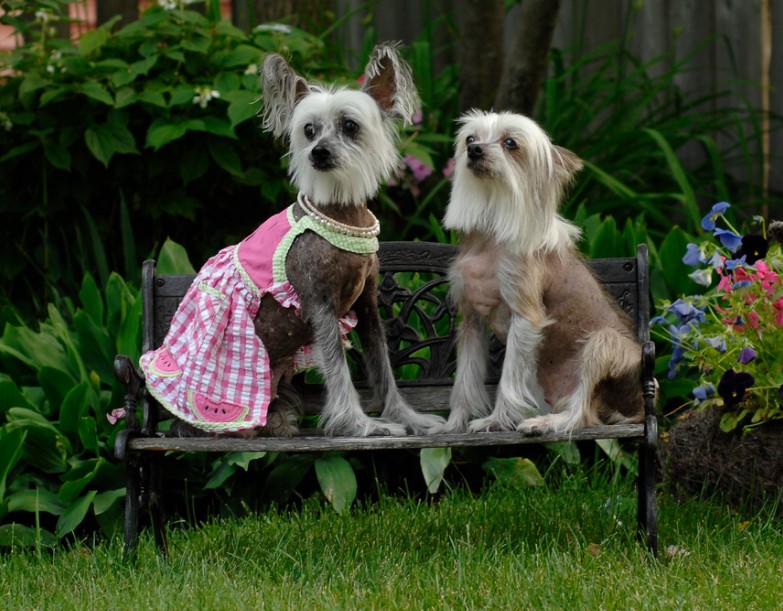 Representatives of the breed, as a rule, are not too picky about food, they are very fond of vegetables, fruits, but, of course, not vegetarians. If the pet has few teeth, it is better to give food ground or cut into small pieces. Particular attention is paid to the balance of the feed and the presence in it of a sufficient amount of vitamins A, D, E, calcium, and phosphorus. Select the correct feeding regimen. You can also give special food for decorative dogs with supplements from natural food. If you prefer to feed your pet with ready-made food, then, of course, in this case, it is worth using high-quality holistic or at least super premium food.

In general, the breed is distinguished by its endurance and good health, but nevertheless, a special predisposition is noted for some diseases. Very often Chinese Dogs suffer from allergies. Females have difficult births. There are joint problems and keratoconjunctivitis. Hairless dogs are prone to blackheads and sunburn in the summer.

Also, the owner should take into account that the gene responsible for hairlessness is associated with a gene that is responsible for the quality of the teeth, that is, the less wool a dog has, the worse its teeth. In hairless dogs, an incomplete dentition or loss of teeth is noted from an early age. They often suffer from tooth decay and stomatitis. The lifespan of the Chinese Crested is up to 12 years.