Clumber Spaniels are English dogs with French roots. From other spaniels, representatives of this breed differ in appearance, but they have the same high indicators of working qualities. Clumbers are the owners of a calm disposition and a balanced psyche, it is enough to take care of them, but before buying, you should take into account some of the shortcomings of the breed. 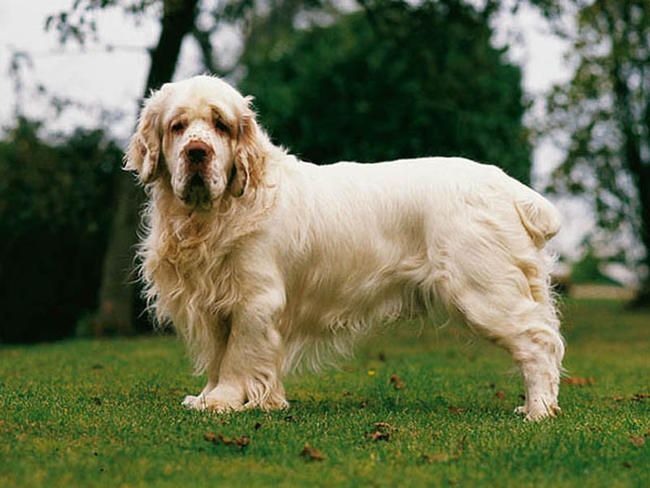 Even though the UK is considered the official homeland of the Clumber Spaniels, it is still an Anglo-French breed. The first who took up the selection and breeding of these dogs was the French duke de Noailles, who crossed the Basset Hounds and the Alpine Spaniels that have not survived to this day, which was considered the closest relatives of St. Bernards. In 1768, before the start of the Great French Revolution, de Noal managed to send all his dogs to England, Nottinghamshire, or rather to the Clumber Park estate, which belonged to the Duke of Newcastle, where his huntsman W. Mansell continued his work on breeding Clumber Spaniels. Representatives of this breed conquered the British aristocrats and took a place at court, becoming pets of the crowned heads. So, Prince Albert, husband of Queen Victoria, was a big fan of these dogs. His love for Clumber Spaniels was inherited by his son, the future King Edward VII. In 1860, these dogs were first presented at an exhibition, and in 1884 they took pride of place in the top ten breeds recognized by the American Kennel Club. The official International Cynological Association Standard No. 109 for Clumber Spaniels was published in 1954. 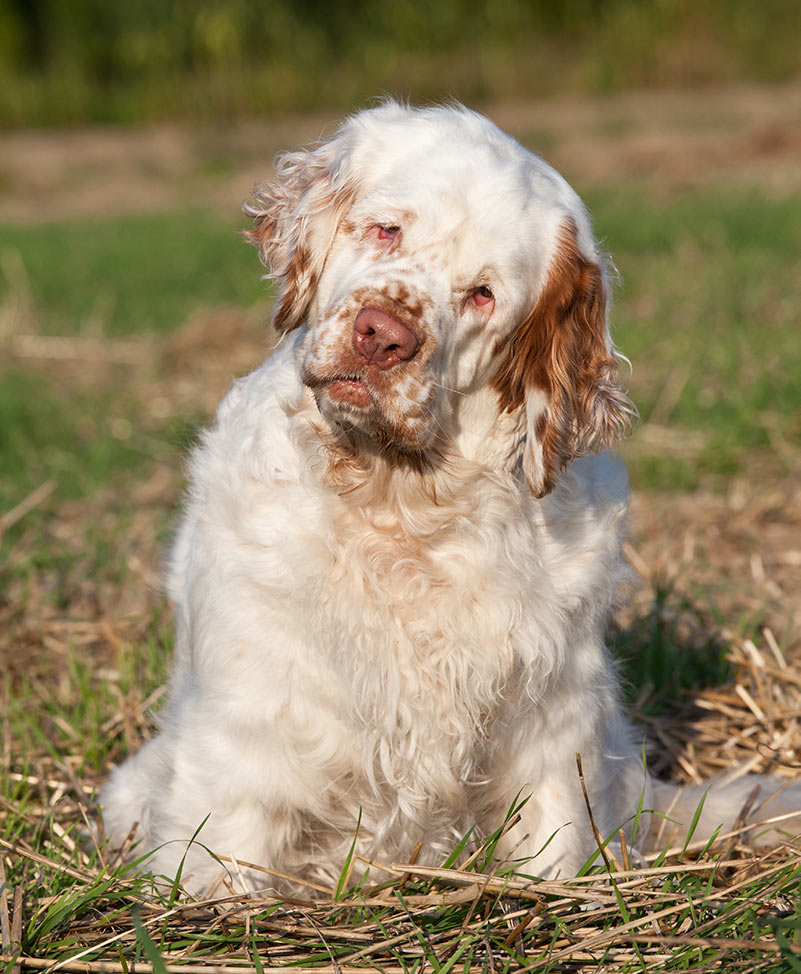 Clumbers are the most massive spaniels among all existing varieties of these dogs, strength, and power are read in their appearance. Representatives of this breed have a rough, massive, but well-balanced skeleton, well-developed muscles, strong limbs, and a rather large head. These are not too fast, but hardy dogs, they have the patience and perseverance necessary for hunting down the game.

The coat is thick, smooth, and silky, on the chest and limbs there is long decorating hair.

The calm and even a little sleepy appearance of Clumber Spaniels fully reflects their temperament – these dogs are not at all peculiar to the fussiness and restlessness of small spaniels. At the same time, they are also deprived of the melancholic mood of Bernards, successfully combining calmness and a lively, cheerful disposition. Representatives of this breed are intelligent, courageous, have unshakable determination and self-esteem. With the owner and all members of the family,

Clumber Spaniels behave affectionately and friendly, and with strangers, they are restrained and detached. These dogs are not prone to aggressive behavior, but they have a pronounced territorial instinct, therefore, if someone tries to violate the boundaries of their possession or dares to threaten the owner, Clumber Spaniels will show incredible courage and protect the home and family. Representatives of this breed are smart and show perseverance and diligence in training and education. They do not remember and execute commands too quickly, but their desire to please the owner more than compensates for this. 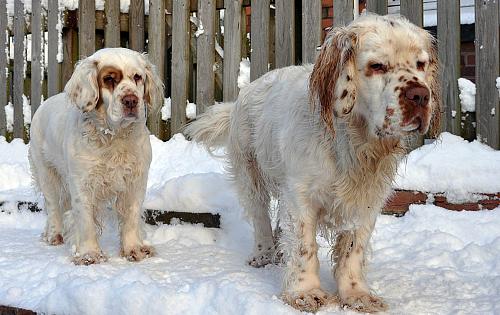 It is not difficult to take care of these dogs, the main thing is to accustom them to all hygiene procedures from early childhood.

The coat should be brushed with a massage brush and furminator every 3-5 days, and daily during molting. Bathe your dog as needed, on average 1-2 times a month, using shampoo and conditioner for soft hair.

Clean your ears weekly from the accumulated wax, dust, and dirt, wiping the inside of the ear with a cotton pad dipped in peroxide or a special lotion.

Wipe eyes daily with a soft cloth or a lint-free cloth dipped in chamomile broth or warm boiled water.

Brush your teeth several times a week with a special toothbrush and toothpaste for dogs – this serves to prevent the formation of plaque and calculus.

The claws of individuals that often walk a lot, they grind off on their own. If this does not happen, they need to be trimmed monthly with a guillotine claw. Too long claws interfere with the correct placement of the paws. 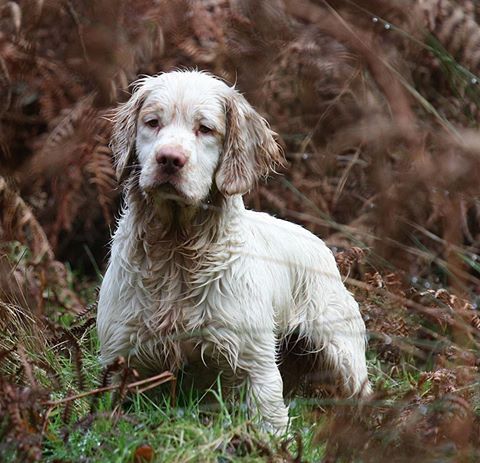 Clumber spaniels can be based on commercial foods or natural foods. Both types of food have advantages and disadvantages and the choice depends only on the owner.

Representatives of this breed are not very active and tend to overeat, which often leads to overweight. To avoid this, it is necessary to strictly control the amount of food consumed by the dog and monitor its calorie content. 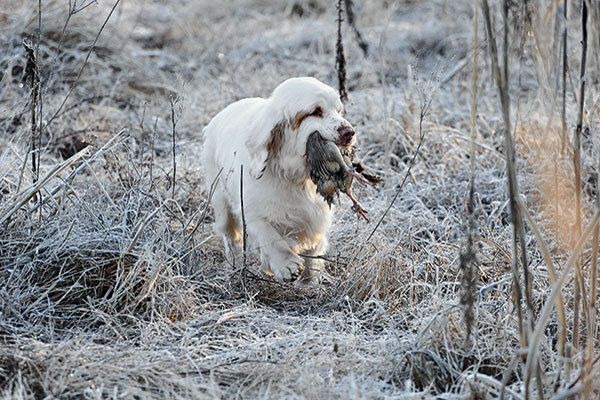 How to choose? A boy or a girl?

This is a rare breed of dogs, only those individuals who have received high marks at exhibitions and diplomas in working tests can be allowed for breeding, which serves as a guarantor of their talent and maximum preservation of the necessary traits and qualities. In addition, only professional breeders, who often conduct pets for genetic abnormalities and X-rays, which confirm the absence of dysplasia, can guarantee not only purebred but also the health of the puppies.

Before buying, you need to make sure of the health of the future pet – it should have a smooth, shiny coat, clear eyes without streaks and redness, clean skin without rashes. Already at 2 months they stand confidently on their paws and move well, there should not be lameness or insecurity in their movements. There are no significant differences in the character of boys and girls, therefore, the sex of the puppy should be chosen based on the purpose of the purchase. So, for breeding, you need to buy a bitch, for participation in exhibitions – a dog.