Corridors are a fairly extensive genus of catfish, many of which have received a permanent residence permit in amateur aquariums. They are unpretentious in care, help to keep the aquarium clean, and some also have an amazing color. The latter, not without reason, refers to the hero of our article – the Venezuela orange corridor.

The Venezuela orange corridor (Corydoras aeneus “Venezuela Orange”) is a freshwater tropical fish from the Armored catfish family. According to modern research, the fish is a geographic morph of the golden, or bronze, corridor (Corydoras aeneus), formed in several isolated bodies of water in Venezuela – the Riotui river system and Lake Valencia. Some scientists consider the fish to be a separate species.

Despite the disputes between taxonomists, the fish is one of the most attractive corridors, although in many regions it is quite difficult to acquire it, and the price, at times, is quite high compared to more popular relatives.

The main feature of the Venezuela Orange corridor is its stunning body color. The fish will never go unnoticed, thanks to the orange spots on the body, which contrast perfectly with the metallic sheen of the rest of the scales.

Otherwise, this is a typical corridor, which is completely unpretentious in content and gets along well with most types of tropical ornamental fish.

The Venezuela orange corridor is characterized by intestinal respiration, so the fish from time to time need to float to the surface of the water to take another breath of air. If the corridors begin to do this very often, then this signals a problem in the aquarium – there is no aeration or the water quality has deteriorated. 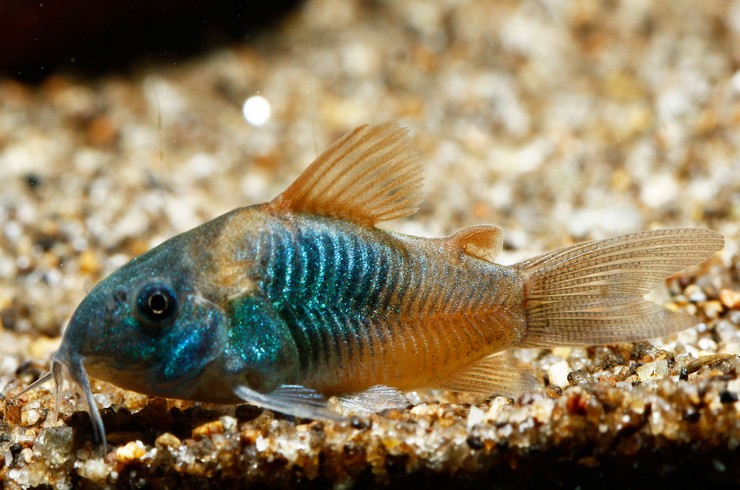 Corridors Venezuela Orange has a characteristic body shape of a kind. It is short, with a rounded abdomen and a convex back. On the sides of the body, rows of plates are clearly distinguished, forming similarity of a shell in catfish.

The lower mouth is surrounded by three pairs of antennae, which are organs of touch and help the catfish navigate in troubled water. It is also a great tool for digging soft soil.

The main body color is rusty-orange. A large black (green) spot with a characteristic turquoise tint is located under the dorsal fin on both sides. There is a bright red spot on the head. The species is not large, the average size is about 5 cm, so you can even keep these catfish in nano-aquariums.

The Venezuela Orange corridor is home to South America. The fish lives mainly in the basin of the Rio Tui River and Lake Valencia, which are located in the northern states of Venezuela.

Somik prefers cool mountain water with a fast current and is not found in the plains. The water temperature in such reservoirs rarely rises above 24 ° C. The bottom is covered with fine sand or pebbles, as well as stones, which have become rounded under the influence of the current.

It is recommended to keep the Venezuela Orange corridors in groups of 6 or more individuals. Given the small size of the fish, a large aquarium is not needed for this, a capacity of 40 liters or more will be sufficient. The fish should always be available to the surface of the water to be able to take a breath of atmospheric air.

Particular attention should be paid to the soil. It should not be large and have sharp edges. Otherwise, the fish can damage their delicate antennae. Coarse river sand or small-diameter rounded pebbles are best. It is recommended to decorate the aquarium with natural decorations: stones, driftwood, and live plants. Remember to set up small hiding places where the fish can hide as needed. It is worth noting that you can choose any type of vegetation because the catfish will not cause any harm to it.

Corridors love clean water, so install a filter with a suitable filter in the aquarium, the flow can be moderate or strong. Good aeration is also important. But the fish do not like bright lighting, they prefer muted.

Once a week, you should replace 20% of the water in the aquarium with fresh water. If you use tap water, do not forget to prepare it with the Tetra AquaSafe conditioner before adding it to the aquarium, which instantly removes hazardous compounds (chlorine, heavy metals) and enriches the water with useful vitamins.

Joint keeping with large and aggressive fish is excluded because they pose a real threat to catfish. The corridors can attack small shrimp, but with adults, such problems do not arise.

The Venezuela orange corridor is an excellent helper in the aquarium because it will eat up any food residues that sink to the bottom. However, it is better to refuse live and frozen food in the diet so as not to accidentally introduce an infection into the aquarium. In addition, such feeds are unbalanced and can degrade water quality in a short time.

The best choice will be a specialized catfish feed. They are tablets or plates that quickly sink to the bottom, which prevents other fish from eating them. The tablets retain their shape for a long time and do not spoil the water.

Dry food fully satisfies the corridor’s need for nutrients, and the vitamins and herbal supplements included in the composition strengthen the fish’s immunity, ensuring the longevity of your pets.

Tetra Cory ShrimpWafers is a unique balanced food for all types of corridors. Contains shrimp, rich in omega-3 acids to promote healthy growth.

Venezuela orange corridors begin to breed at the age of 8-12 months. Sexual dimorphism is not pronounced, females are usually larger, their abdomen is more round.

For breeding, it is better to establish a separate spawning aquarium equipped with an air-lift filter. Spawning is preferable in groups – there should be one female for 2-3 males. A week before the expected spawning of heterosexual individuals, it is recommended to divide and feed abundantly.

Frequent small water changes are excellent at stimulating spawning activity. Males begin to quickly pursue females. When the female is ready to mate, one of them stands sideways (letter T) in front of her and releases her milk. The female collects them in her mouth, after which she finds a suitable place, lubricates it with milk, and sticks the eggs. This process continues several times. The fecundity of the female can reach 200 eggs.

When spawning comes to an end, the producers are separated. Egg incubation lasts 3-6 days, depending on the water temperature. The fry begins to feed on their own within a day after hatching. The fish grow actively and quickly acquire the color of adults.