Not all aquarists like small fish species. Some of them tend to keep small numbers of large fish. If you belong to this category and have the opportunity to have an aquarium for several tons of water, then the Amazonian red-tailed catfish would be an excellent choice. You will learn how to keep such a giant at home from our article.

It is characterized by rather large size (up to 130 cm). It’s hard to imagine, but such a giant has become a fairly common aquarium fish. Unfortunately, there are still places where juveniles of these catfish are sold as beautiful ornamental fish, sometimes keeping silent about the immodest sizes of adults. Surprisingly, the growth of the red-tailed catfish does not even hold back the volume of the aquarium. Excellent appetite and boundless gluttony lead to the fact that the fish grows right before our eyes.

The species is found in South America. Refers to omnivorous fish, although preference is given to animal food. Red-tailed catfish hunt at night from an ambush.

The local population uses the red-tailed catfish (here called “pirarara”) as a food item, although their meat is dark in color. The species is artificially bred in fish farms in some countries of Southeast Asia, from where it also comes for sale as aquarium inhabitants. It is a desirable sport fishing trophy.

To scare away larger predators or simply unwanted guests, the red-tailed catfish is able to make loud sounds, reminiscent of the roar of an elephant. To do this, the fish sharply passes a mixture of water and air through tightly pressed gills. For this feature, the nickname “screaming fish” was attached to the catfish.

It is worth noting that the Orino catfish is unpretentious in maintenance, quickly gets used to the owner, and even allows itself to be stroked and fed from the hands. Often found in public aquariums and aquariums.

The red-tailed catfish has an elongated, powerful body. The head is large, flattened with a wide mouth and large eyes. The mouth opening is bordered by three pairs of long whiskers – one on the upper jaw and two on the lower.

All fins are well developed. The tail is single, with a well-defined adipose fin. 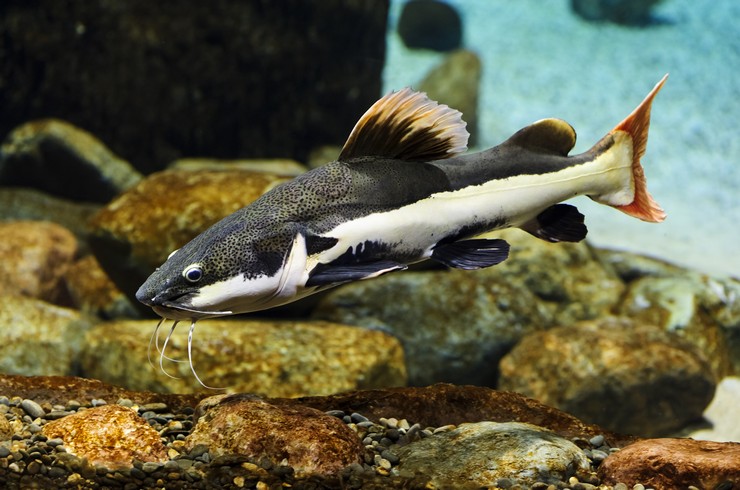 The coloration of the Orinox catfish is quite attractive. The upper part of the body is dark, the lower part is white. Numerous black spots are scattered on the head. The tail fin, painted in bright orange or red, is in sharp contrast to the body. The top of the dorsal fin has the same color.

The homeland of the red-tailed catfish is the warm tropical waters of the rivers of South America belonging to the Amazon and Orinoco basins. The water here is soft and acidic; at the bottom, you can find a large number of snags, which serve as shelters for twilight hunting. The catfish was artificially populated in the southern states of the United States and the countries of Southeast Asia.

Considering the huge size of red-tailed catfish, the aquarium for them will need a very large one. One individual should have at least 300 liters, although containers for several tons of water are considered ideal aquariums for this species. Orinok catfish lead a near-bottom lifestyle, so it is desirable that the bottom area be as large as possible. The older the individual, the more time it spends without moving, lying on the bottom.

In an aquarium with these catfish, do not overuse decorations. They can easily turn over any loosely fixed thing, and in the worst case, even break the glass. The design should be as austere as possible. You can put several large snags, which will become a refuge for the fish. It is not recommended to use sand and small pebbles as soil. Red-tailed catfish love to swallow soil and pass them through their gills. So that the fish do not accidentally damage them, it is better to stop at medium and large stones, or even leave the aquarium without soil, which will also make it easier to clean up food debris.

It is completely inappropriate to plant live plants in the home of the red-tailed catfish. They will be quickly destroyed by the flat-headed predator. 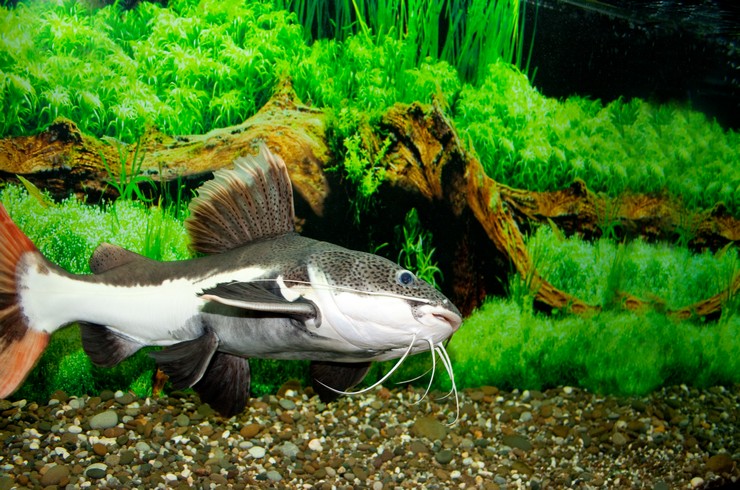 Natural voracity and preference for animal food require the installation of powerful filters and compressors. Red-tailed catfish do not like bright light, preferring soft and muffled ones. It is important to note that, if possible, it is necessary to use external equipment (for example, a thermostat, thermometer, etc.), it costs nothing for this giant to break them even with a slight blow of the tail. Once a week, you need to change 20% of the water volume in the aquarium.

At first glance, it seems that a phlegmatic, constantly lying catfish at the bottom is not capable of offending anyone, but this impression is false. At any moment, a sharp throw can be made and the unlucky fish will find themselves in the huge mouth of a predator. Therefore, the joint keeping of red-tailed catfish with any species, smaller in size, is doomed to failure. Moreover, even large fish are not immune from being eaten by Orinox catfish. Sometimes they grab prey, which is only a third less than them.

Hence the conclusion: the ideal option for keeping red-tailed catfish would be a large aquarium with a single inhabitant. 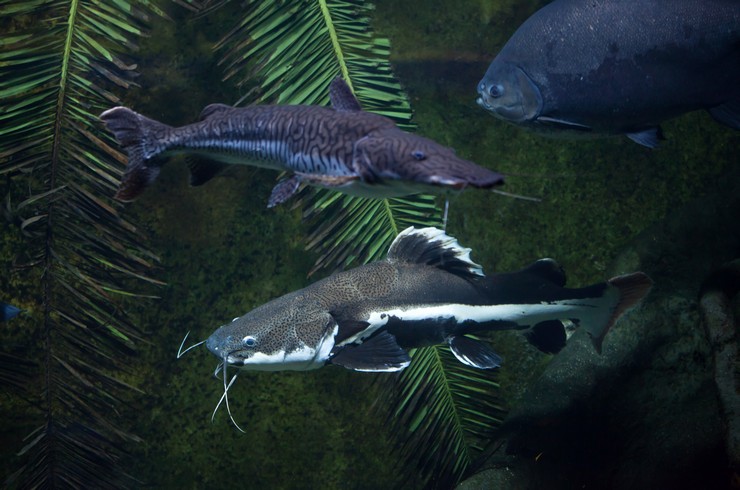 If the desire to keep catfish with other fish haunts, then you should pay attention to large aquarium inhabitants – Arowana, astronauts, Managua cichlazoma, black pacu, pterygoplicht, pangasius. However, do not forget that each new large resident will require a proportional increase in the volume of the aquarium.

In spacious containers, it is possible to keep several individuals of the red-tailed catfish, but one should not forget about their pronounced territoriality, which often leads to bloody clashes.

The natural diet of red-tailed catfish is extremely diverse. This Amazonian is completely indiscriminate and eats everything he can catch: fish, worms, crustaceans, and fruits that have fallen into the water. If the opportunity presents itself, he can easily feast on small amphibians, reptiles, and even rodents. As you can see, preference is given to animal food.

The basis of food for such a large predator is, first of all, seafood: fillets of white fish, mussels, peeled shrimps. It is useful to introduce small pieces of fruit, scalded lettuce into the diet.

It is not recommended to feed red-tailed catfish with products from the meat of warm-blooded animals (chicken, beef, etc.), because they are practically not absorbed by fish, and can lead to obesity and problems with internal organs.

Unfortunately, most catfish, especially adults, do not like dry food. Sinking tablets for bottom fish such as Tetra Tablets TabiMin (XL) are available. There are cases when they fell to the taste of catfish.

Always offer your catfish a varied diet. It is noted that when feeding the same product day by day, the fish get so used to it that they refuse other food. It is necessary to feed young fish daily, adults are better several times a week. Observe the feeding norms, remember that catfish will swallow food, again and again, they have no sense of proportion, and this is a direct path to obesity and rapid water pollution.

It is possible to get offspring from a red-tailed catfish at home only if you are the happy owner of a warm decorative pond for several tons of water. It is in such conditions that fish are bred in fish farms in Southeast Asia.

Breeding in an aquarium has not yet been recorded.