Catfish corridors (Corydoras sp.) Are deservedly included in the top 10 most popular aquarium fish. At the moment, about 200 species of corridors are known, but descriptions of species unknown to science appear with enviable regularity, which is still being numbered with the Latin letter “C”.

The genus name comes from two Greek words “Corys” and “Doras”. The first word means “helmet” and the second – “armor”. The corridors really have a kind of armor – several rows of overlapping bone plates go all over the body, allowing the catfish to defend themselves from predators.

The fish are extremely peaceful, have interesting behavior, and very well clean the bottom of the aquarium from the remains of food, for which the corridors have received the love and recognition of millions of aquarists.

Catfish corridors are very similar to each other and in most cases differ only in color. The body of the fish is short, the tummy is rounded, the back is convex. Several rows of bone plates stretch along the back, creating a kind of shell in the fish. This is reflected in the name of the family to which the corridors belong – Armored catfish (Callichthyidae).

The mouth of the fish is lower, perfectly adapted for eating food from the bottom of the aquarium. A characteristic feature of the corridors is three pairs of antennae located near the mouth opening: two pairs above the upper jaw, one pair (poorly visible) on the lower one. They serve several important functions. First, with their help, catfish dig in soft soil in search of food. Secondly, they serve as a sense of touch and allow corridors to navigate in muddy and muddy water. The pectoral fins also serve as a protective organ thanks to the extremely sharp rays, so when transplanting from one aquarium to another, care must be taken to avoid injury. 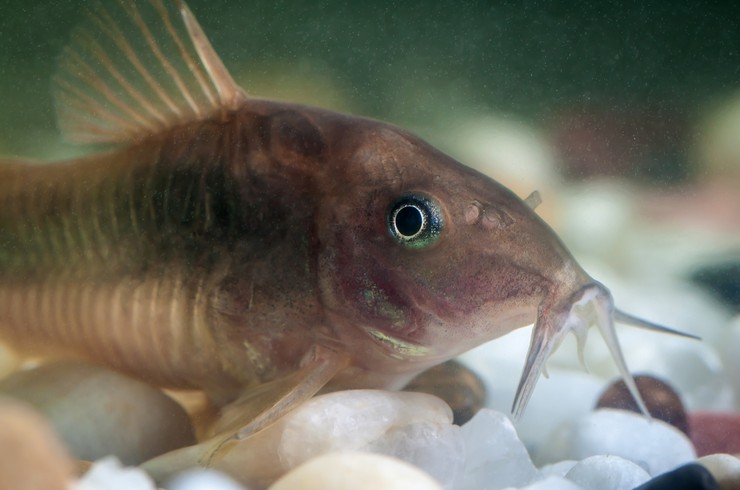 The color of the corridors is extremely diverse and depends on the specific species. The main color can be either uniform or include spots or stripes all over the body or in its individual parts. You can also find albino forms – with a completely white body and red eyes. 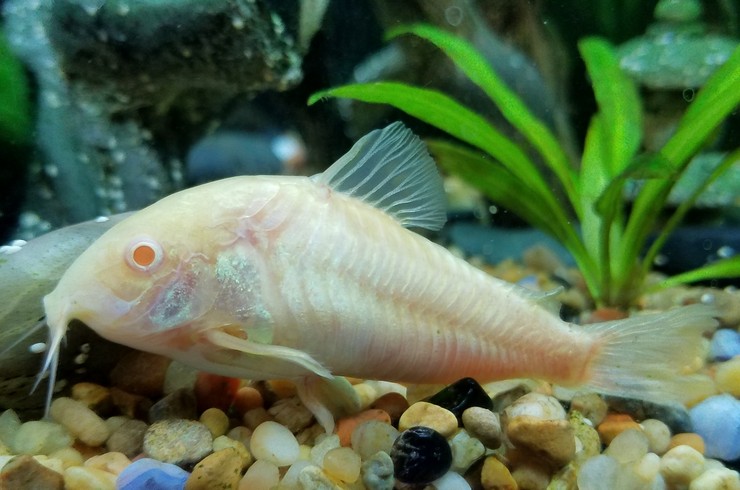 Catfish corridors naturally inhabit the rivers of Central and South America. Fish are found in the basins of the Amazon, Paraguay, Orinoco rivers flowing through the largest countries of the continent. Catfish prefer silted, slow-flowing, and stagnant waters. In nature, they usually hide in the dense vegetation of reservoirs, spend time constantly searching for food in the ground. After the rainy season, many deep streams in which the corridors live dry up. To survive in such conditions, catfish acquired the ability to swallow air from the surface of the water similar to labyrinth fish. But the corridors have no special organ, and oxygen is absorbed in the large intestine (the so-called “intestinal respiration”).

The corridors are schooling fish, so it is best to start a school of 4-6 individuals in the aquarium. The minimum aquarium volume for a couple of fish is 30 liters. Much attention should be paid to the ground. It should not contain sharp edges, as the fish can damage their sensitive antennae. When choosing the size of the soil, it is better to focus on large sandy or small pebble. Corridors are very fond of swarming in the ground, and if it is very large, then the catfish will feel uncomfortable. In addition, food for fish often falls into the space between the stones, which the corridors cannot reach, and the accumulation of organic matter can lead to a number of problems in the aquarium. 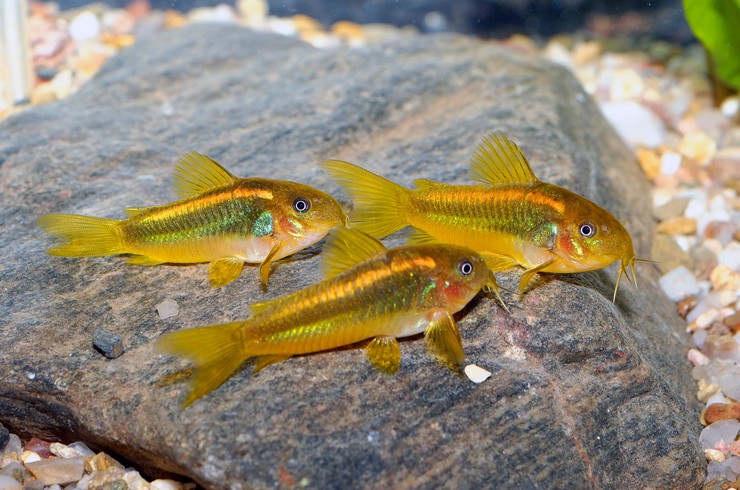 Despite the fact that in nature the corridors are able to live in very turbid water, orienting themselves with the antennae near the mouth opening, it is better to create good filtration and aeration in the aquarium. In case of a lack of oxygen, the fish will very often rise to the surface of the water and swallow a portion of the air.

Catfish corridors are twilight inhabitants. Their activity begins in the dark. Therefore, it is necessary to create diffused lighting in the aquarium and install shelters in which the corridors will rest during the day, for example, artificial grottoes or natural driftwood. 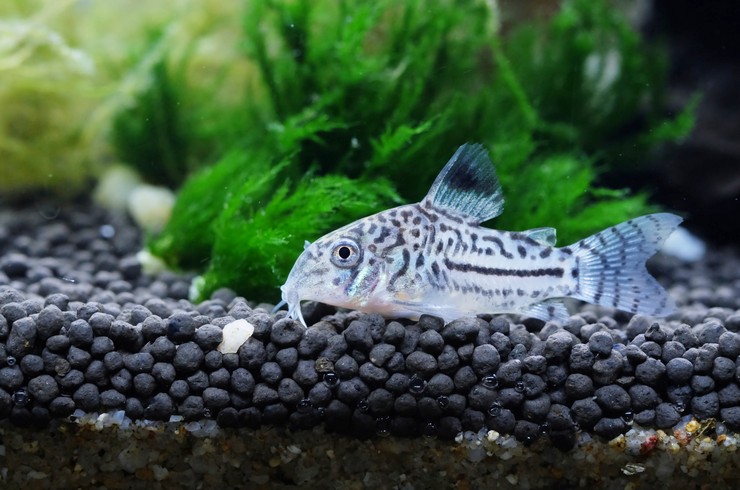 Corridors are rightfully considered one of the hardiest fish that can adapt to almost any conditions of detention. The temperature for them can vary from 22-25 ° С. It is better not to heat the water above this temperature, the catfish will be uncomfortable. Water is preferable soft, similar to the conditions in nature, but the corridors feel quite well in very hard water. Likewise with the pH. It is not recommended to allow sharp jumps in water parameters, the more stable the environment, the better.

Catfish corridors love dense thickets of living plants, in which they can hide from enemies or wait out the daylight hours. You can plant any species you like, the fish will not harm them.

Corridors are schooling fish, so it is advisable to have them in an aquarium for 4-6 individuals. They are great for living with other species in a shared aquarium. These peaceful fish swim mainly in the bottom layers of the water. The best neighbors for corridors will be viviparous fish (mollies, swordtails, platies, guppies), calm barbs, tetras and neons, scalars, and other dwarf cichlids. In no case should you plant catfish with large and aggressive cichlids (astronomies, akars), in which case even the “armor” of corridorians may be useless. Extremely heat-loving discus will also become not the best neighbors, the optimum temperature for their keeping is much higher than the comfortable one for the corridors. Skirmishes with other near-bottom species are also possible: battles, gerinoheilus, etc. Although ancistrus get along quite well with corridors.

Catfish corridors are picky about food. But it is important to remember that good quality nutrition is the key to the health and longevity of fish. Tetra, the world leader in fish feed, has developed a food specifically for corridors – Tetra Cory. Two-color tablets that sink to the bottom quickly become available to catfish. A diet high in shrimp is rich in essential omega-3 fatty acids to promote healthy growth. Due to their special consistency, the plates do not pollute the water. 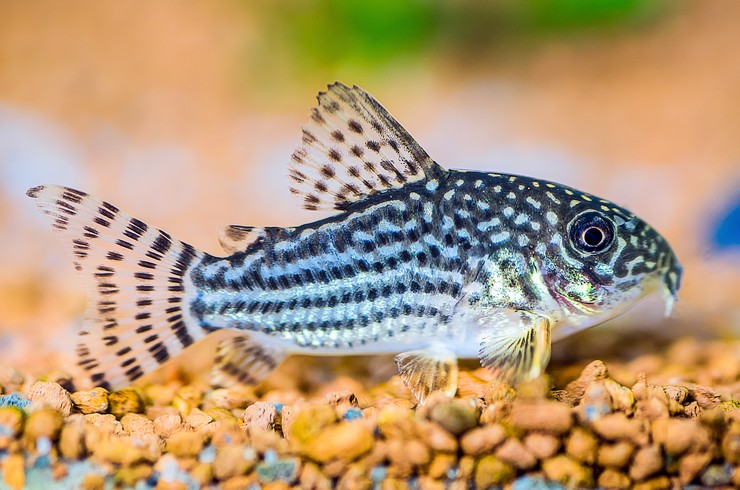 Breeding corridors is not particularly difficult and even a novice aquarist can do. First of all, you need to choose a couple of manufacturers. Sexual dimorphism in corridors is weakly expressed: females are usually larger and have a more intense body coloration, the dorsal fin is short and rounded. Sexual maturity in fish occurs at the age of about 8 months. 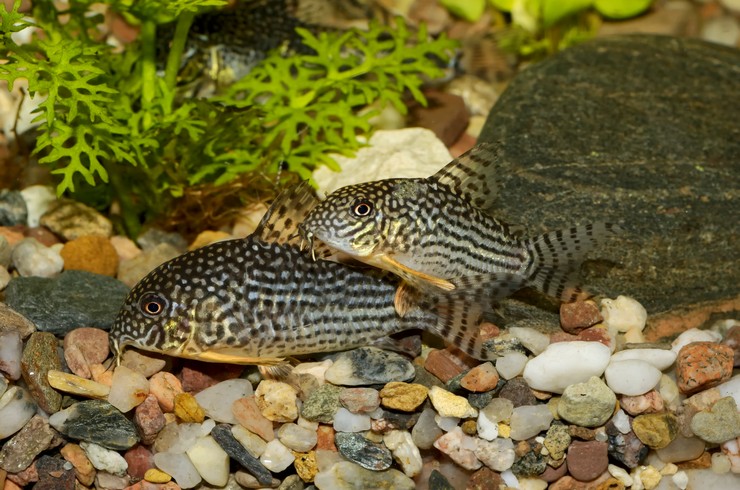 For breeding, you will need a spawning aquarium with a volume of 30 liters or more. It is advisable to place one female and 2-3 males there. To stimulate spawning, fresh cold water is added to the aquarium, the temperature is lowered by several degrees, and enhanced aeration is turned on. There is no need to cover the bottom with soil; it is better to place a live plant with wide leaves, for example, anubias, in the aquarium.

Catfish are placed in the aquarium in the evening, after which it will be desirable to place the aquarium close to the window: sunlight serves as another impetus for spawning. You may have to wait a few days before starting the process.

Breeding usually begins in the morning or afternoon and lasts several hours. The fertilization process is rather unusual. Males chase the female for some time, after which she collects milk in her mouth, and lays eggs in folded abdominal fins. Next, the female finds a suitable place on glass or plants, lubricates the eggs with milk, and glues the eggs to it. The procedure is repeated again. A similar mechanism increases the percentage of fertilized eggs. During one spawning, a female can lay up to 200 eggs.

After spawning, the producers must be planted. The incubation period lasts 5-6 days at a temperature of 23-25 ​​° C. Unfortunately, over such a long period, many eggs can become covered with fungus and die. Therefore, the best option would be to raise the temperature in the spawning aquarium to 27-28 ° C. This will accelerate the development of eggs and reduce the incubation period to three days, thus reducing the risk of fungal infection. After the fry appears, the temperature is gradually lowered to the usual level.

Corridor fry is relatively large and usually do not have problems with feeding. You can even use catfish pills, it’s very funny to watch the fried stick around them from all sides. At the age of 30 days, the size of the fish reaches about 1 cm.