Kings of the aquarium – this is the name given to one of the most beautiful aquarium fish on the planet – Discus. These fish immediately attract the eye due to their extremely unusual, almost round, body shape and enchanting coloration, especially in numerous breeds. The fish were called Discus fish for their flattened, disk-like body. 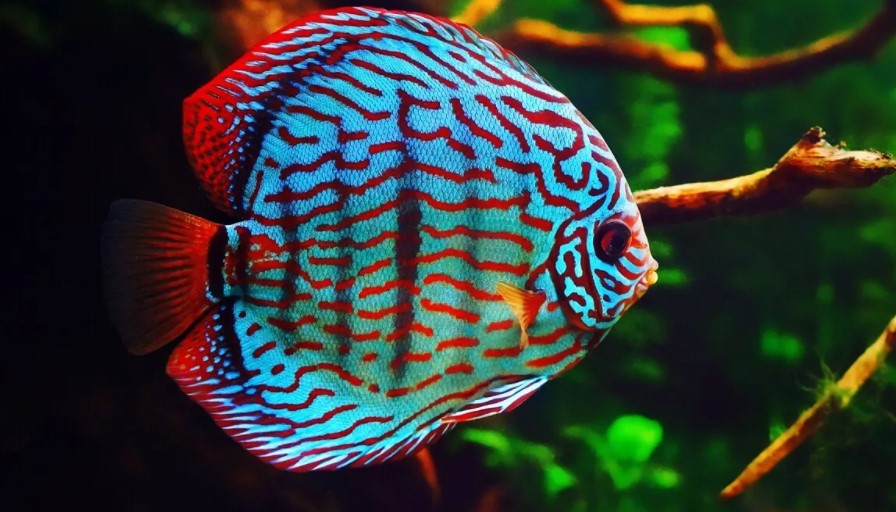 The genus name consists of two Greek words symphysis – “fused” and odon – “tooth”. And this is due to the peculiarity of the location of the four extreme teeth, located at the junction of the upper and lower jaws, one below the other. The name Diskus appeared a little later. This word in ancient Greece meant a flat throwing projectile for competition.

Discus has a certain specificity of keeping: stable water parameters, elevated temperature, the need for large volumes for keeping. They can be considered extremely sensitive, which discourages many aquarists from keeping these adorable fish. The low immunity of Discus is associated with their natural habitat. The water in the Amazon River Basin is very soft and acidic and contains a large number of tannins. In such water, the reproduction of microorganisms is difficult, therefore Discus is not able to properly respond to infections. Thus, a Discus is recommended for keeping experienced aquarists who perfectly understand all the processes taking place in the aquarium.

Discus was first described by Australian scientist Johan Natterer during his next expedition to Brazil. This happened in 1833 after a specimen of a previously unknown fish was caught in the Rio Negro River. Johan Jacob Heckel made a great contribution to the study of the Discus, it was he who suggested the generic name Symphysodon.

The first living Discus were introduced to Europe in the middle of the 20th century. Currently, thanks to the mass breeding of fish in special complexes, it is not difficult to buy them practically in any country. But it should be noted that the price of Discus remains one of the highest. Especially when it comes to a rare color variation.

The body of the Discus is disc-shaped and very laterally compressed, to the point that when observing the fish from the side of the caudal fin, you can see two eyes protruding from the sides of the head. These eyes are large and are located on a small head. The fins can be transparent or have colored spots in the same color as the body. On the brown background of the body, there are numerous silvery-blue iridescent lines (9 wavy longitudinal blue lines). In most cases, only the outer stripes are visible, but if all the lines are saturated, it looks very nice. The caudal fin is fan-shaped; the dorsal and anal fins run from head to tail. The pelvic fins are elongated. In adult males of Discus, a distinctly prominent forehead can be observed.  In an aquarium, Discus can grow up to 25-30 cm.

The homeland of the Discus is the rivers of South America. They are found in the Amazon Basin. Therefore, Discus can be found in countries such as Brazil, Colombia, Venezuela, and Peru.

The biotopes of the Amazon Basin are very interesting and can undergo significant changes. In December, the rainy season begins, which leads to flooding of rivers, as a result of which huge areas are flooded. Floods bring a lot of turbidities, and the previously crystal clear waters become like a swamp. After the end of long rains, the water level drops, it becomes transparent again. Quiet backwaters appear everywhere, in which the water acquires a dark color (“black water”).

In such isolated areas, the water is extremely soft and acidic. It is in such conditions that Discus live in the wild. They prefer to stay closer to the coast, live in thickets of bushes. The bottom in such reservoirs is a thick layer of decaying leaf litter. Most of the life and spawning of fish take place among the roots of coastal vegetation. It should be noted that it is very rare to find Discus in large rivers, they prefer small streams and tributaries. As a result of this isolation, local color populations of Discus have arisen, and we can observe a magnificent variety of colors of these amazing fish. 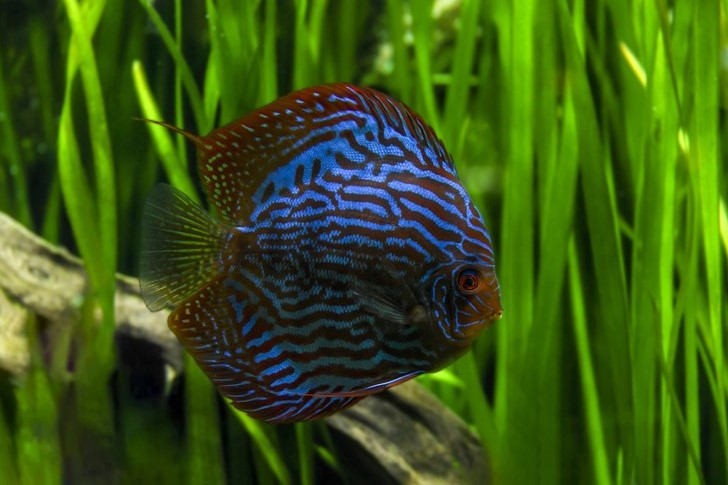 Symphysodon aequifasciatus is a rather sedentary, schooling, and slightly shy fish. The content of Discus is very complex. It is best to keep a flock of Discus of 7-10 individuals in a separate species aquarium of a large size, with a volume of 200 liters and a water level of 40 cm (fish are very sensitive to the size of the aquarium). But if you still want to have Discus in a common aquarium, then you need to take into account that the main problem of selecting neighbors will be the thermophilicity of Discus (temperatures from 28 to 32 ° C – not every aquarium fish can withstand such temperature). It is not recommended to plant Discus together with scalars, they do not get along well with them. Prefers to stay in the middle layers of water. For a comfortable stay of fish, the aquarium is decorated with various shelters (grottoes, snags, stones) and thickets of aquarium plants (such as hygrophila, kabomba, limnophila), you can also use floating plants (they create a shade that Discus loves so much). small pebbles are used as soil, but many seasoned aquarists recommend not putting soil in the aquarium at all. The light should be moderate, with shaded areas (floating plants are good for shading).

Symphysodon Aequifasciatus is very sensitive to water quality. Water parameters for comfortable Discus keeping: hardness up to 12 °; pH 5.5 – 5.7 (sharp changes in acidity can cause great damage to the health of fish); temperature 28 – 32 ° C (in an aquarium with adult Discus, it is recommended to periodically increase the water temperature to 35-36 ° C, this activates the intestines and helps cleanse the body). The aquarium must have a powerful (preferably biological) filter, good aeration. A weekly water change is required up to 30% of the volume of the aquarium (some aquarists advise changing up to 10% of the volume daily) and frequent cleaning (siphoning) of the soil. Discus feeds on live, plant food, you can give substitutes (dry food in the form of dried bloodworms, crustaceans is undesirable). Adult fish are fed artificial food 2-3 times a day. During spawning, you need to feed with live food. To prepare it, minced meat is made from well-washed pieces of beef heart (you can also add squid, spinach, liver), to which vitamins are added, and then placed in a plastic dish and frozen. Before feeding, cut off a piece of frozen minced meat and rub it on a fine grater.

Discus reaches puberty by 2 years (if kept in a large aquarium, this period decreases). To breed Discus, a spawning box with a volume of more than 100 liters is needed, which is placed in the quietest place in the room. Do not put soil and plants in it. Ceramic pots, driftwood, stones, as well as the wall of the internal filter or heater act as a substrate. Optimum parameters of water for breeding> Discus: hardness 1-3 °, pH 5.5 – 6.5, temperature 30 – 32 ° C.