Breeders could not ignore such a fish as guppies. Thanks to its beauty and unpretentiousness, it has become so popular that it was called the “fish of the millennium”. Guppies reproduce easily and produce already formed fry, which creates ideal conditions for breeding work. Thanks to this feature, a huge number of color variations of guppies appeared. In our article, we will talk about one of these forms – Moscow guppies.

Guppies Moscow – a group of breeding forms of the common guppy (Poecilia reticulata). Surprisingly, Russian and Western breeders call different color forms of guppies “Moscow”. For the former, these are red varieties with a well-developed veil tail, for the latter, fish with a dark blue monochromatic body color. Similar confusion occurred at one of the international guppy exhibitions, when the victory was awarded to dark blue fish from the collection of Japanese breeders, in the description of the manufacturers who indicated the place of purchase – Moscow. Unfortunately, due to the lack of a unified classification of guppy breeds, the organizers did not know that the name “Moscow” was already wearing a different color variation. In this article, we will adhere to the European point of view and call the blue forms “Moscow”. You can read about red guppies in a separate article. 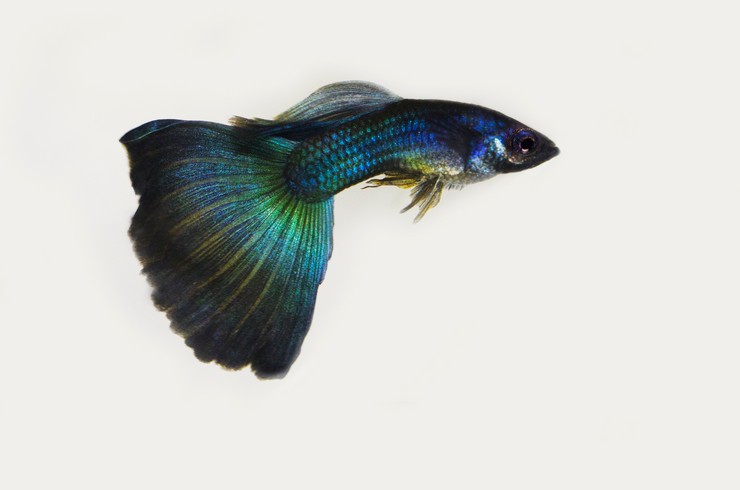 Moscow guppies are small fish, the length of an adult male is usually about 3 cm, females are usually twice as large.

Under suitable conditions, Moscow guppies can live up to 4 years. However, their lifespan is sharply reduced if the temperature in the aquarium is kept above 26 ° C. 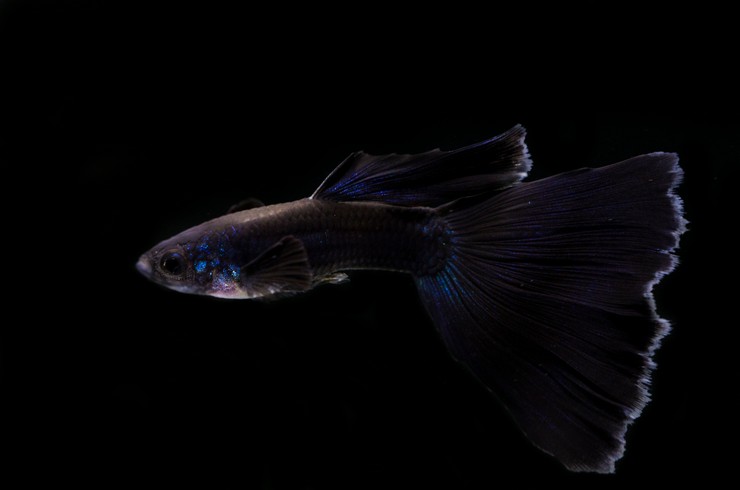 Moscow guppies are not found in wildlife. These are exclusively aquarium pets, which are kept by amateurs all over the world.

The ancestors of the breed live in the reservoirs of Central and South America, as well as on the islands in the Caribbean. At one time, guppies were introduced to other continents as part of the malaria control program, because the larvae of the anopheles mosquito are a real treat for guppies. Thanks to natural endurance, the species has become a real cosmopolitan and has taken root perfectly in various parts of the world.

As a rule, Moscow guppies are kept in small groups of 6 individuals. It is desirable that there are 2-3 females per male. Any aquarium from 40 liters is suitable for maintenance. It must be equipped with a lid so that the guppies do not accidentally jump out of the water.

It is best to lay sand or small pebbles at the bottom. This is the most optimal substrate for growing live plants, which must be present in an aquarium with Moscow guppies. Plants not only serve as natural shelters for fish but also improve the environment in the aquarium. Do not forget to decorate your aquarium by creating a composition of natural driftwood and stones. Among them, the Moscow guppies will look the most impressive.

An aquarium with Moscow guppies should be equipped with a filter and a compressor. And to maintain a comfortable temperature, you need a thermostat. 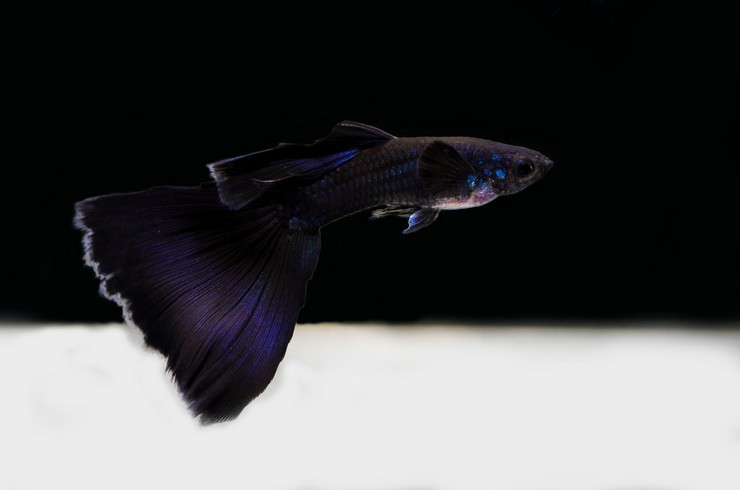 To exclude the poisoning of the fish by the products of their own metabolism and to prevent the growth of algae in the aquarium, 20% of the water should be replaced weekly with fresh water. Most often, tap water is used for these purposes, the quality of which sometimes leaves much to be desired. It may contain a number of compounds hazardous to fish, such as chlorine or heavy metals. Before adding this water to the aquarium, it must be prepared by adding the correct amount of Tetra AquaSafe conditioner (5 ml per 10 liters of water). It will instantly make the water suitable for fish life.

Among small decorative aquarium fish, it is difficult to find a species that would not get along with the Moscow guppies. These are extremely calm and peaceful fish, which can be kept with mollies, zebrafish, tetras, neons, rasbora. Not to mention the popular catfish: corridors, ancistrus.

Guppies should not be combined with goldfish, very active species such as the Sumatran barb, and large predators.

It is allowed to keep several guppy breeds in one aquarium. But only if you are not engaged in breeding work. Indeed, with the joint-life of different color variations, random crosses will occur, and no one can guarantee the receipt of homogeneous offspring.

The best choice for Moscow guppies is high-quality dry food, which has a number of advantages: they contain a whole range of nutrients and vitamins, cannot serve as a source of infection, and are easy to store.

It should be noted that the guppy’s mouth is very small, so the feed should be lightly rubbed before feeding. Tetra has developed Tetra Guppy Mini Flakes, special food for guppy lovers. These mini flakes are ideal for fish feeding near the surface of the water. The size of the flakes is specially selected for small fish.

A good alternative is the TetraMin Flakes base feed, which is made from more than 40 high-quality ingredients and provides a comfortable digestion thanks to its prebiotic composition.

You can diversify your pet’s diet with the delicious Tetra FreshDelica treats.

Reproduction of Moscow guppies at home is not difficult. These are viviparous fish that do not lay eggs but produce fully formed fry.

Distinguishing a female from a male is extremely simple: the latter is smaller in size, has a bushy tail, and, of course, gonopodia.

You can get offspring both in general and in a separate aquarium. For maximum offspring survival, be sure to provide shelter for babies in the form of grottoes, mosses, and floating plants. Spawning begins with the courtship of the male. For a while, he chases the female he likes, until she reciprocates. Further, the mating process takes place, when the male, with the help of gonopodia, introduces his milk into the body cavity of the female, where fertilization takes place. 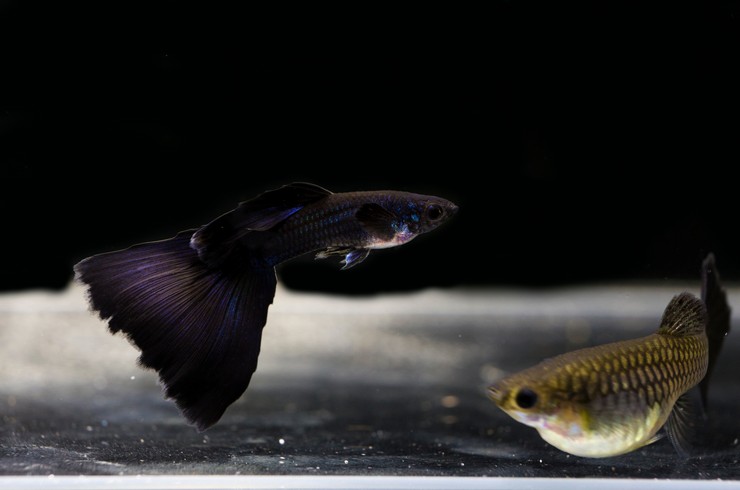 Caviar develops, depending on the water temperature, for 21-40 days, after which the female “gives birth” to 100 fries. The amount depends on the age of the female, her health, and the conditions in the aquarium.

Moscow guppies cannot be called exemplary parents, because at the first opportunity they will eat their offspring. Therefore, if spawning is carried out in a separate container, then the producers should be deposited. If it happens in a common aquarium, then one can only hope that the fry will quickly hide in shelters.

Feed the fish up to 4 times a day. It is best to use quality dry food for fry, such as TetraMin Baby. Babies grow very quickly. If there is a need for controlled reproduction of subsequent generations, then it is necessary to plant females and males as soon as the first sexual characteristics appear.

Moscow guppies become sexually mature at the age of 3-5 months.