The Ficus Benjamina, also known as weeping fig and colloquially as Benjamina, is an evergreen plant with green or green-white leaves. The tree is very popular as a houseplant due to its foliage and air-purifying effect. However, like all ficus species, the weeping fig is poisonous for cats and should not be eaten. Here you can find out which toxins are contained and how you can recognize poisoning.

Is Ficus Benjamina Poisonous to Cats? 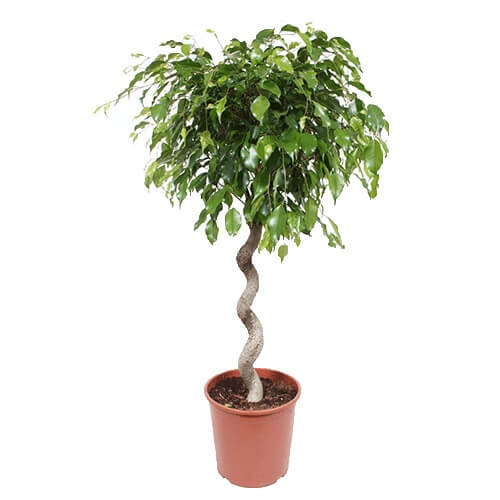 Yes, the Benjamini is poisonous for cats. Like other ficus species, including the rubber tree Ficus elastica, the weeping fig contains a white milky sap. This contains flavonoid compounds, furocoumarins, resin, and rubber. These components of the milk sap have different degrees of harmfulness for cats:

How is Weeping Fig Poisoning Shown in Cats?

Cats quickly run the risk of poisoning themselves on indoor plants. They explore their environment not only by sniffing but also by nibbling and scratching. The small, green leaves of the Ficus Benjamina also quickly fall victim to the play instinct of the house tiger.

If the cat chews on the leaves, the poisonous milky sap from the inside of the plant gets into the cat’s body.

This can lead to severe symptoms of poisoning. You can recognize poisoning by the weeping fig by the following symptoms:

What Can You Do If the Cat Eats Ficus Benjamina?

Many cat owners do not know how dangerous the weeping fig is for cats and keep the Benjamini as a houseplant. If you think your cat has eaten parts of the plant, watch carefully for symptoms. If the cat only eats small amounts, the symptoms of poisoning are often only mild. Even so, you should keep an eye on your pet and, if in doubt, take it to the vet. The veterinarian examines the animal thoroughly and initiates the appropriate treatment. In general, as with most plants, prevention is better than aftercare.

Find out which plants are poisonous to cats and keep your cat away from them.