Peaceful and harmonious coexistence between dog and cat: Mission impossible? According to popular belief, dogs and cats are archenemies. But that is utter nonsense! Nice friendships between kitties and puppies confirm the opposite day after day!

A dog trainer gives Pettime advice on how to get cats and dogs to live together properly and even make them best friends! Scratching, kicking, biting, … This is supposedly how dogs and cats behave towards each other. But in reality, the relationships between these two animal species are not that bad at all – on the contrary!

In most cases, owners play a crucial role in the dog and cat relationship.

Once the first encounter, which often seems like a dialogue between deaf people, is over, our four-legged friends retract their claws and stop growling. It is entirely possible to bring animals together and get used to each other. Often times they can even become good friends when they live in a house.

The Time of Misunderstandings Between Dogs and Cats

The first encounter is also the most delicate. The two very different characters – cats free and independent, dogs sociable and disciplined – are faced with a real communication barrier. Our companions do not speak the same language and their intraspecific rules of conduct do not work between them, as we explain in this article. When a cat lifts its paw, it threatens to scratch its counterpart, while a dog sees it as an invitation to play. You can find out more about how a dog communicates and how a cat expresses itself in our body language sections. The different body language is therefore a real hurdle when bringing dogs and cats together.

The situation can, in some cases, be moving in a very worrying direction. If the female cat has just given birth, she is aggressive. Sick and elderly cats withdraw and avoid playing, as this only exhausts them and does not bring them any joy. And when the kitty lives with a single person, she has become so possessive that she rejects the three of them.

The Coexistence of Dogs and Cats: A Question of Territory 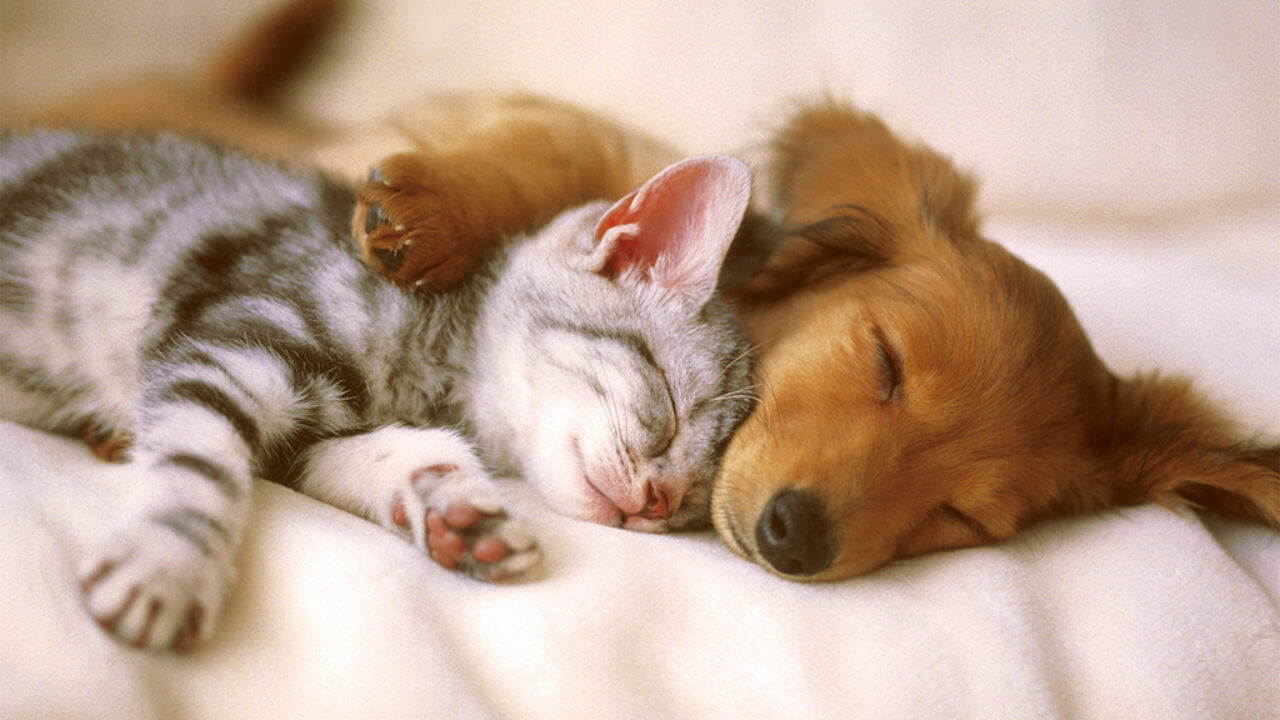 The concept of territory also has implications for the dog-cat relationship. If the kitty lived in the house first, the situation is delicate. The house tiger is angry because of the intrusion into its territory: the cat reacts with a humpback, scratches, hisses, the hair on the back of the neck stands up – so it looks bigger than it really is, to scare the intruder!

He accepts the intruder, even if he is very attached to his territory. This tolerant attitude is due to his socialization. During this time, as a young dog, he has to get to know strangers and learn to accept other animal species as his own. Its actions are either an imitation of the mother’s behavior or the result of the upbringing and socialization of its owners. So integrating a cat into a dog household is easier.

Some Dog Breeds are Better to Coexistence with Cats Than Others

Incidentally, the good development of the coexistence between dog and cat is often related to the breed of the dog. The biggest cat lovers among dogs include poodles, German Shepherds, who have a sociable temperament, bulldogs, pugs, whippets, and other greyhounds who are very independent, herding dogs, and also Newfoundland dogs, who are known for their protective instincts. We have listed more dog breeds for you in this text that get along well with cats.

It is better not to introduce cats to terriers like the Jack Russell … They run after cats as well as rodents. Some cats are particularly well suited to coexistence with a dog, namely mixed breed cats, European Shorthair cats, and Chartreux cats.

Tips to Improve the Coexistence Between Dogs and Cats

You have to take a few precautions. That also applies to the performance. There is absolutely no question about turning your back on both of them and letting them stare at each other like petrified! That would quickly turn into a fight. Avoid making the dog or cat jealous of the other animal roommate at all costs. Both are extremely sensitive and do not tolerate even minor injustices at all.

Are you caressing the one? Then pamper the other. Be careful not to favor the newcomer! The animal that is there longer would quickly feel neglected and excluded. Of course, the newcomer needs affection in order to arrive safely in his new home, but you should also secretly pay a lot of attention to the animal that has been there for a long time.

Stick to the eating corners

In order to improve the coexistence between dogs and cats, it is essential to respect the strategically important places, especially the eating corners. Everyone needs their own bowl, and the same goes for places to rest – each animal also needs its own basket. So pay attention to the spatial separation at the feeding place of the cat and the dog.

Living together under the star of unity

Once the question of the territory is clarified, the two species of animals begin to get along well. Then you see dog and cat sleeping cuddled up against each other, their fur still damp from cleaning each other, or they are just chasing each other through the room at a hell of a speed.

When the two have become a committed team, chatting together is on the program. Slippers in tatters, vases in pieces … The list is long. The two are so close that sometimes you don’t even know who the dog is and who the cat!

We recommend that you raise the animals together.

Raising a kitten and puppy together, or bringing older animals to their new homes at the same time, is undoubtedly the easiest solution for you. However, one must have enough time from the arrival of these two rogues to keep an eye on them. Later they will be calmer and form a wonderful team!