Dobermans, due to their genetic characteristics, are distinguished by good health, and their lifespan is the envy of the owners of some breeds, but a hereditary predisposition to certain diseases and genetic defects has not passed this wonderful breed. 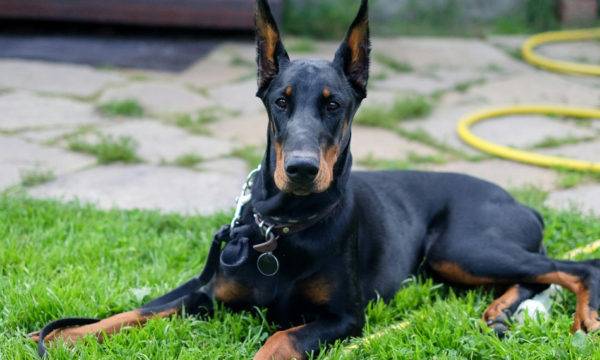 Like many modern dog breeds, Dobermans are allergic to dust, pollen, and molds. If the body is covered with non-healing sores, and the dog is constantly licking itself, then in this case, simple medications cannot be dispensed with, you need to consult a doctor, since the pet may have become seriously ill with sacral licking granuloma.

The cardiovascular system is often affected by various diseases that are especially dangerous for this breed because veterinarians sometimes make such diagnoses as arrhythmia, coronary heart disease, tachycardia, and heart failure in dogs even under five years of age. Therefore, it is important to closely monitor the following symptoms of heart disease in Doberman Pinschers: difficulty breathing when the dog takes long and noisy breaths, loss of balance and falling when walking, tremors like convulsions.

With a timely visit to the veterinarian and appropriate treatment, you can heal and give your pet many years of life. With heart disease in a Doberman, you need not be lazy and carry out regular examinations of the dog, always keep the medications prescribed by the doctor ready.

Unfortunately, a sick heart can also be inherited. Changes in the structure of the heart muscles are congenital and some Dobermans suffer from cardiomyopathy. Symptoms of the disease, namely fainting, weakness, and shortness of breath, appear when the animal is already extremely difficult to cure. Usually, signs of illness in a Doberman become apparent at the age of seven and eight. In order to identify abnormalities in the heart of a dog in the early stages, it is necessary to examine your pets annually and conduct cardio tests.

Narcolepsy is a hereditary disorder of the Doberman Pinscher, a disorder of the dog’s central nervous system that results in sleep disturbance and decreased muscle tone, for example, after playing. A dog during an attack of narcolepsy, which lasts from a couple of moments to twenty minutes, becomes motionless, and its eyes seem to glaze over. Stroking or loud noises can help bring the pet back to normal. The cause of this disease is unknown to scientists, and doctors only recommend preventing seizures to prevent collapse.

There is also a hereditary predisposition to hypothyroidism, but not so high. It is accompanied by skin diseases, hair loss, weight loss, or vice versa.

Defects of teeth do not belong to Doberman pinscher diseases but are recognized only as shortcomings of some representatives of the breed.

Dobermans are not immune from many diseases that affect dogs of other breeds, so the pet needs to be regularly examined by veterinarians, it is especially important for a Doberman to undergo cardiological tests, and before mating to take all the necessary tests confirming the dog’s health.