Dobermans got a bad name without any objective reasons. In many ways, this unfairness towards intelligent, strong-willed, and fearless dogs arose among people during the Great Patriotic War, when the Nazis used Dobermans as guard dogs in concentration camps, and this opinion was also strengthened when they began to be used in the police service.

Dobermans of the twenty-first century are an example of beauty, grace, strength and efficiency, and, what is important, high intelligence. Representatives of the breed are valued for their indestructible loyalty to the owner, reliability in the performance of security functions, and ingenuity.

The temperament of Dobermans is different, some are friendly, while others are too timid or aggressive. But it should be understood that those dogs that were not paid attention to become aggressive. After all, everyone knows that there are no bad dogs in our world, there are bad owners. 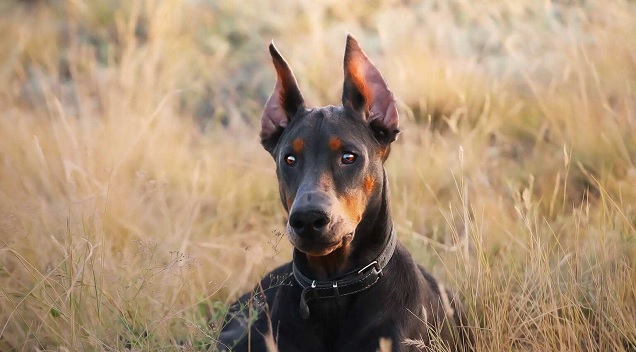 Despite the formidable appearance, the nature of the Dobermans is soft, they are affectionate and loving animals. They are social creatures, it is important for them to communicate with family members, participate in family affairs. Thanks to their intelligence and strong-willed nature, Dobermans receive an equal place in the human family.

Representatives of the breed choose one member of the family as a leader, to whom they obey. And from time to time, dogs show dominance, which the owner must suppress in a timely manner.

The Doberman lives in his own house, not in the owner’s house, travels in his car, and plays with love and affection with his children, he is a key, irreplaceable member of the family. It is these possessive motives that make dogs outstanding as guards and protectors. Attentive to his family, the Doberman has human traits.

Representatives of the breed treat children well as if they understand all the responsibility for them, the value and importance of children for the family. The representatives of the breed feel the vulnerability of children and understand that they need to be protected. This quality of Dobermans allows parents not to worry that the child may be harmed, but if other people’s children or adults, but who are not family members play with their children, who suddenly start talking loudly, make sudden movements cry, then the dog can perceive such behavior as aggression towards the children of their master, and take measures to protect them, for example, run up, start barking, growling. Therefore, it is not recommended to leave children alone with a dog, and children need to be explained how to behave with a dog.

Representatives of the breed do not like to be alone, no matter what to do, but they need to communicate with a person, they are ready to just lie nearby, but dogs of this breed need physical activity, active games, so they are more suitable for active people who have already had experience in keeping dogs.

Dobermans will not bark without provocation, they are reserved, but suspicious of strangers. Representatives of the breed behave cautiously with strangers, they will not get to know strangers but will behave aloof, in full control of the situation. Therefore, it is impossible to catch a dog by surprise and unexpectedly harm its owner.

Well-bred Dobermans do not show aggression without reason, but even starting to bark, growl, bite their teeth, they will not attack. Their method is to intimidate, they will keep intruders at bay, squeezing them in a corner or against a wall until the owner comes and decides what to do with the intruder. Of course, some dogs take the initiative and can attack and bite. Again, it all depends on the upbringing. If the dog or family members are in danger, the fearless nature of the Doberman will not hesitate to come to the defense.

An important character trait of a Doberman is the ability to independently distinguish between good and bad. But teaching a dog to distinguish good people from intruders is necessary from an early age, not all dogs are able to independently come to this understanding without training.

It is worth noting that the male and female behave differently with strangers. The bitch divides people into two categories: owners and everyone else. Doberman is primarily a protector of the family, and it is strongly discouraged to break into the house where the bitch lives without an invitation. Males are hot and do not have much patience, they are ready to rush to protect their master and home every second, but possessing a subtle mind, the male tries to behave prudently.

Doberman Pinscher and Other Animals

Dobermans have different temperaments and have different attitudes towards animals. Dogs that have lived in a family with cats and other small animals since puppyhood treat them calmly and friendly. Cats can sleep in an embrace. If we talk about other people’s cats, then the pet may wake up the prey instinct, as a result, the dog will start pursuing, but not because it wants to catch up and tear the animal apart, but because it has penetrated into the territory of the dog that it is guarding. If, while walking, a Doberman sees someone else’s cat, then he will not chase after her if the owner does not approve of the eternal hunt of dogs for the meowing brethren, but only looks at them contemptuously.

When interacting with other dogs, Dobermans can show dominance. Often, representatives of the breed are friendly to other dogs, happy to play if they behave calmly.

Doberman Pinschers are one of the smartest breeds that learn surprisingly quickly and almost never forget what they were required to remember in the process of training. Representatives of the breed have agility, the energy that can be directed in the right direction and make a real athlete out of a pet.

Representatives of the breed have excellent learning abilities, but they will only listen to a confident owner who will make it clear to the dog that he is the leader. Training should be consistent, interesting, and soft. Any rudeness towards the dog will cause distrust, stubbornness, and unwillingness to follow commands.

The nature of Dobermans can be described in one word – vigilance, they are always on the alert, and their caution is not dictated by fear, but by the ability to accurately assess the reality around them due to their high intellectual qualities. A representative of any breed is a person, but only Dobermans are considered dogs with human thinking.

The most dangerous are dogs that experience fears that prompts them to attack. Fear can arise from stress, and Dobermans are sensitive to stress and can be nervous when stressed. Being alone, dogs can gnaw furniture out of boredom, bark out of boredom.