Large cozy hippos are frequent cartoon characters. Animals seem clumsy and slow. But they only seem to be so. In reality, these are powerful, sturdy fast animals. And besides, they are quite aggressive. These are torpedoes more than 4 meters long and weighing three tons, with large strong fangs, thick strong skin, which, after processing, is used to grind diamonds! Hippos live in groups led by large males, who are always ready to defend their herd and territory in the fiercest fights lasting up to several hours. 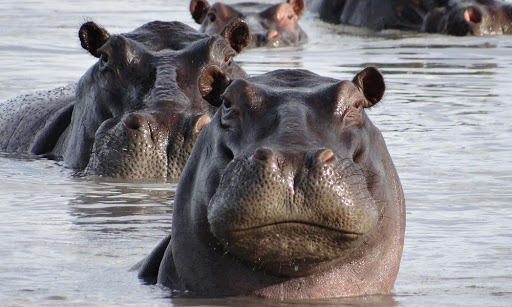 Now the number of hippos is greatly decreasing, they are completely protected on the territory of national parks, and they are often destroyed on vacant lands. Previously, when overpopulation occurred in a certain territory, hippos settled on vacant lands, but now they clearly notice the boundaries of the protected territories and try not to leave them, which causes significant overpopulation. Given these characteristics of hippos, it is not surprising that there are clashes with people.

Hippos are caring parents. So in South Africa in the Kruger National Park, a hippopotamus inflicted mortal wounds on a tourist from Johannesburg, who was trying to photograph her cub at close range.

But the most frequent accidents with hippos in the water. In Malawi, a man-driven canoe ferried five women and five children from the fish market on the island. Nyamwu. Suddenly, a hippopotamus surfaced next to the boat and attacked the ship. Five, including a woman with a two-year-old child, managed to swim to the shore. The rest drowned in the lake.

A similar incident occurred in southern Zambia. Several people were canoeing across the Zambezi River near the city of Siavonga. It happened at dusk and the ships stumbled upon hippos resting in the water. The animals pounced on the canoe and drowned them.

Also in South Africa, in the Mkhuze National Park, but already on the land, a hippopotamus trampled on a local resident Esther Singomu Jobe, fifty years old, who was trying to throw the nets over Lake Nsumo.

In all cases, the behavior of hippos is easily explainable – a large object on the water is perceived as a rival, especially since it does not respond to the signals of the male host, which must act in obedience to instinct.