The temperament traits of the Dogue de Bordeaux are such that it can be called an ideal dog. Representatives of the breed are very affectionate and attached to family members, especially children. However, dogs of this breed are not among the breeds that are friendly towards everyone and blindly obey their owner. 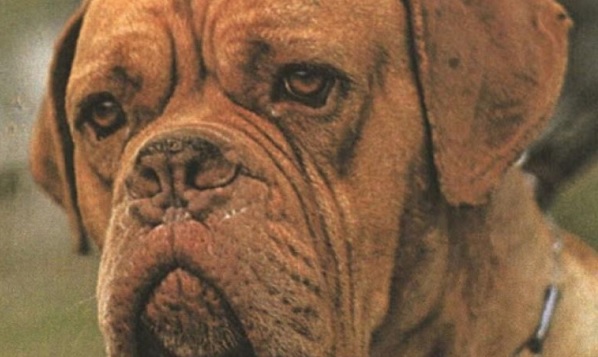 Dogue de Bordeaux can feel comfortable in an apartment, but dogs of this breed require daily physical activity, as well as attention and interaction with the owner. Animals strive to be part of the family, they can make attempts to climb on the owner’s lap, and comfortably settle on the owner’s bed.

Dogue de Bordeaux enjoys spending time with children, showing friendliness, indulgence, and tolerance towards them. However, this does not mean that children can be left unattended with the dog. The animals are large and strong, so it won’t hurt to be careful.

Animals happily meet familiar people, jumping and sometimes, not counting their strength, especially young individuals. Their joy is so sincere that you become attached to animals with the same strength.

Most of the time, the representatives of the breed are calm, they are in a relaxed state, but it is worth calling the pet to play and he will immediately surprise you with his agility, sporting attitude. But due to its large size, the Dogue de Bordeaux may seem slow, dogs of this breed tend to do everything at their own pace. Before doing something at the direction of the owner, the Dogue de Bordeaux assesses the situation, concentrating on something and giving the impression of thoughtfulness.

An integral temperament trait of Dogue de Bordeaux is self-confidence, they look serious, but by nature, they are gentle animals that sometimes amuse and surprise their owners with their actions, for example, snoring or the ability to “speak” (attempts to imitate human speech), change the expression of the muzzle. Amazing dogs very easily change the expression of the muzzle depending on the specific case. They are able to express joy and sadness, humility, perseverance, resentment. They can look into the eyes of a person for a long time.

Within the breed there are no identical dogs, each Dogue de Bordeaux has its own character. So, some are happy to swim, others do not even want to wet their paws, some are active and playful, while others prefer to watch the world around them lying on a comfortable couch.

The Dogue de Bordeaux is suspicious of people who are not familiar to him. Dogs guard their family members and their territory, but they never attack without reason. Guardian qualities are well developed, the dog shows all its strength and fearlessness when attacked in case of a threat.

Unreasonable display of aggression on the part of a dog is the result of improper upbringing. In order for a pet to grow up balanced, adequately reacting to the people and animals around it, timely socialization is important.

Socialized dogs are not aggressive towards other animals that the dogs grew up with. Even defenseless kittens can calmly rub against the dog’s massive head, play with their paws, without a threat to their health and life. But in relation to other people’s animals, he does not show tenderness, and in the event of an attack or threat from another dog, he will not allow himself to be offended. He will not start the fight himself, but he will definitely end it.

Representatives of the breed tend to do everything in their own way, showing stubbornness. They decide for themselves whether to carry out the tasks of the owner or not. If the pet finds the lesson interesting, then the learning process will improve. Therefore, the owner is required to show patience and build training, taking into account the interests of the dog. Smart dogs will not immediately follow the command, they will first think about what will come of it.

If the pet is tired, he will sit down in the middle of the road and refuse to move. Such a manifestation of character can turn out to be disobedience, a manifestation of domination. Therefore, it is important to establish a hierarchy in the early stages, the pet must know what place it occupies in the family and who is the leader.