This four-legged friend delights hunters in the woods and fields with its versatile hunting skills and is a lovable, good-natured companion in its home for all family members. But the German Wachtelhund, English “German Spaniel”, is a real hunting dog and therefore only feels completely at home in a hunter household. 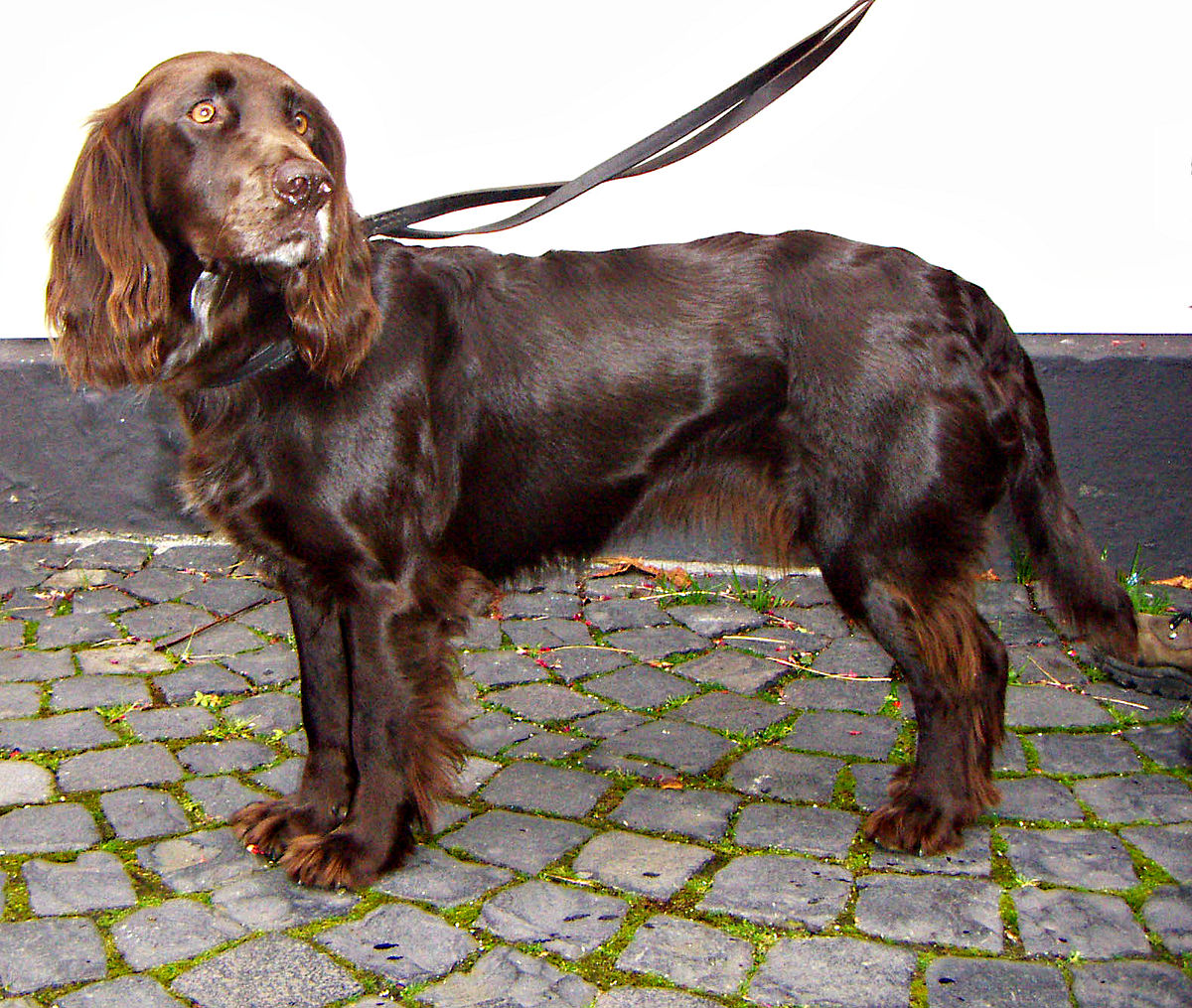 At first glance, the medium-sized German Wachtelhund resembles a Münsterländer or Springer Spaniel, which is why it is often confused with these. The quail – the short form familiar to fans of the breed – usually has long, wavy fur in brown or red, with white markings allowed. Piebalds with a white base color can also occur. A German Wachtelhund weighs between 25 and 30 kg with a robust bone structure and a height at the withers of 45 to 54 cm. 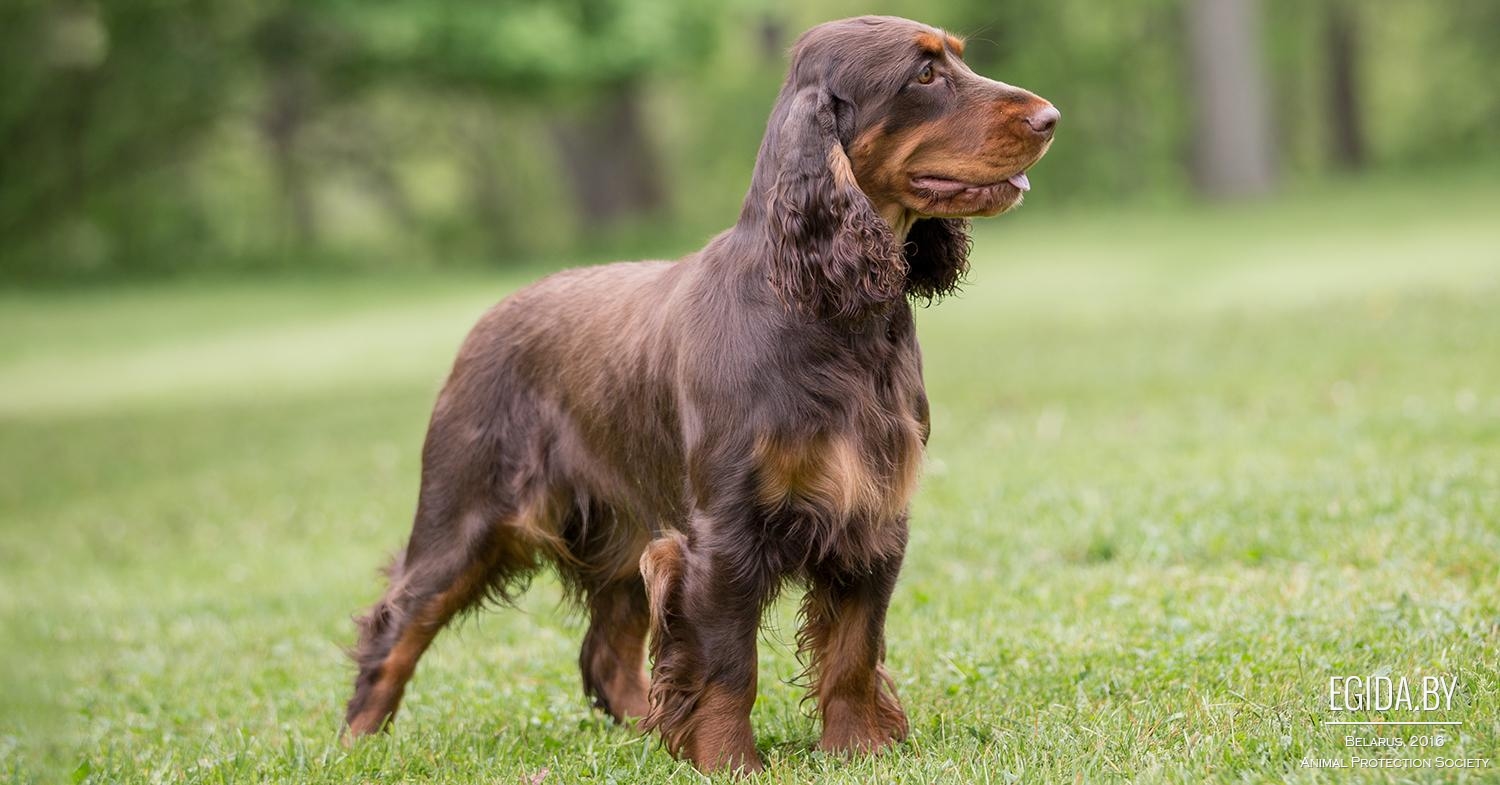 The German Wachtelhund can be traced back to old German rummaging dogs, which, however, were almost superseded by English pointing dogs in their homeland. In the first half of the 19th century, there were targeted breeding efforts. The hunter Rudolf Frieß (1891-1965), also known as the “quail father”, was the chief forester in the Palatinate Forest and literally set standards with his breeding. The basis for the breeding efforts was the desire of many hunters for a versatile companion who can cope well with any terrain. The quail is one of the rare and little-known breeds, especially outside of Germany, which is also because it should only be given into the hands of hunters. In the home of the breed, breeders are affiliated with the Association for German Wachtelhunde e.V., which has existed since 1903 and is committed to maintaining the type and health of the breed. Of course, there are now also breeding efforts for German quail dogs abroad. In North America, for example, friends of the breed founded the “German Wachtelhund of North America” association in 2007 – but this breed remains very rare outside of Europe. 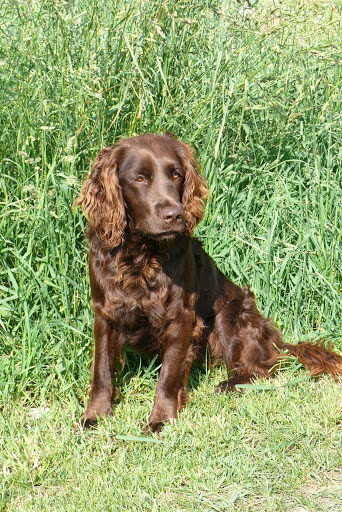 The German Wachtelhund is a hunting dog that needs an adequate workload. He is wild and predatory game sharp and a very multi-faceted hunter. When used appropriately for the species, this four-legged friend is a good-natured and open-minded dog in his home who forms a close bond with his caregiver. He is a happy, energetic companion who is friendly towards people and other dogs. As a very socially compatible four-legged friend, the quail do not like to be alone but rather appreciates the company of its people or other dogs. In addition, the passionate hunter is very brave, persistent, and a quick learner. Guard and protective instincts are usually only very low. Warning: underutilized quail dogs tend to have behavioral problems and poaching. 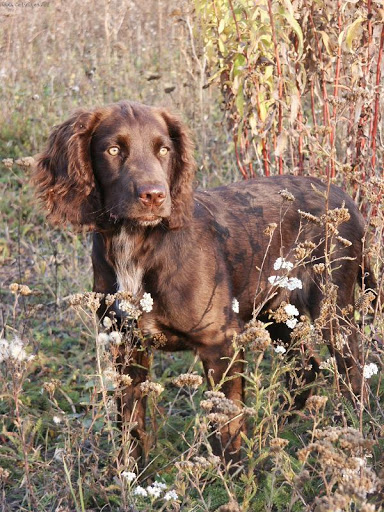 Once you have picked up your puppy from the breeder, you should start training them, as you will eventually replace their familiar pack. The first days and weeks are crucial in helping the puppy to adapt to the requirements of its environment in a playful way. Get your new family member used to a permanent resting place and a place where they can loosen up. After a few days, you can already familiarize him with small car journeys and the collar. A hunting dog should be able to gather impressions of the forest and meadows at an early stage. Depending on its suitability, the quail should undergo training as a hunting dog and learn to sweat and track work early on. It is very advisable to go to an appropriate dog school with the quail puppy. Puppy play lessons are also a good way to socialize your little four-legged friend in advance. Basically, the upbringing of the Wachtelhund requires consistency, know-how, and strong leadership, but no hardship. 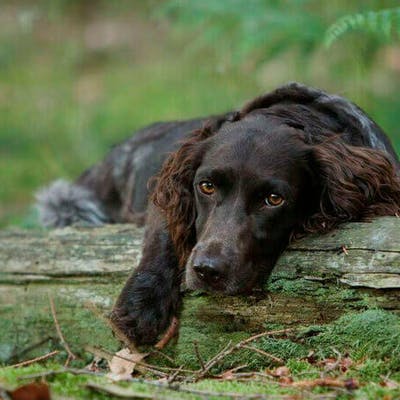 The very talented hunter absolutely needs a corresponding workload – occasional hunters do not meet these requirements! Although athletes could do justice to the – adult – dog with many kilometers of exercise per day in terms of the physical demands of this breed, they could not satisfy their hunting instinct. However, hunters looking for an all-rounder will have fun with this companion: The quail is suitable for almost all hunting work except for pointing or hunting in the burrow. The versatile hunter locates roe deer, red deer, or wild boar and also likes to work in the water. The quail is one of the browsing dogs. These are hunting dogs that look for game independently and over long distances in thickets or reeds. If they have found what they are looking for, they drive the game towards the hunters. This instinctual behavior means that the quail do not necessarily go close by your side when forays through the forest – the appropriate hunting training is again of great importance here.

The breed is considered to be very robust and healthy, but there is a certain tendency to develop skeletal diseases such as elbow and hip dysplasias. In Germany, under the supervision of the Association of German Wachtelhunde, only animals with demonstrably healthy hips are allowed to breed. Talk to your breeder about appropriate health care. Make sure not to challenge your four-legged friends too much in terms of the sport when they are puppies or young dogs: Allow your young quail a lot of free movement, but do not specifically encourage him to run, for example as a companion on the bike – this could negatively affect skeletal growth Malformations in the form of kneecap dislocation or hip and elbow dysplasia. Walking upstairs or very smooth floors should also be avoided, especially in puppies and young dogs. Remember to have regular vaccinations and deworming. The breed reaches an average age of 12 to 14 years.

Grooming this dog does not pose any challenges for you: just brush the insensitive coat regularly to prevent matting. Since the Wachtelhund does have hair, especially during the change of coat, brushing also helps to reduce hair loss on carpets and the like. It is best to take a quick look into the lop ears of your four-legged friend every day so that no inflammation develops in the warm, humid climate there. If necessary, clean your wail dog’s ears with a special dog ear cleaner. In winter it can be useful to shorten the hair between its paws so that no clumps of snow form, which makes it difficult for the dog to walk. If you and your companion hardly walk on asphalt, but only on the forest floor, it may be necessary to cut the claws from time to time. Because on the soft ground they may not wear out enough, which can lead to injuries from getting stuck. 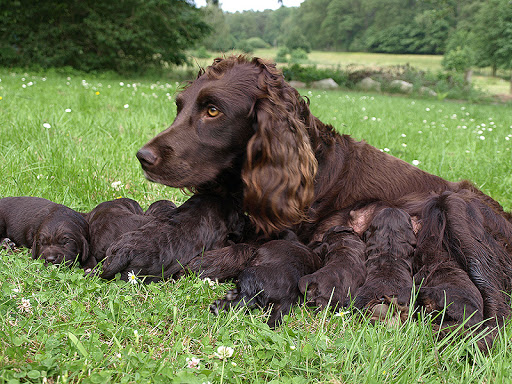 Right from the start, your quail needs a balanced diet that puts meat first: it should be the main component of the diet, regardless of whether you choose wet or dry food. Carefully adjust the amount of food to the needs of your four-legged friend: You should not overfeed puppies either, as this can harm healthy skeletal growth. A puppy needs three to four meals, an adult dog gets by with two meals. Then give him a break. Treats can also be healthy: give your four-legged friend, for example, dry chewing items such as rumen or beef ears to satisfy their chewing needs, or give them – in moderation – sugar-free tooth care snacks or freeze-dried meat snacks especially for dogs. Always provide him with enough fresh drinking water to freely use – you should always take it with you on long trips without natural drinking sources. 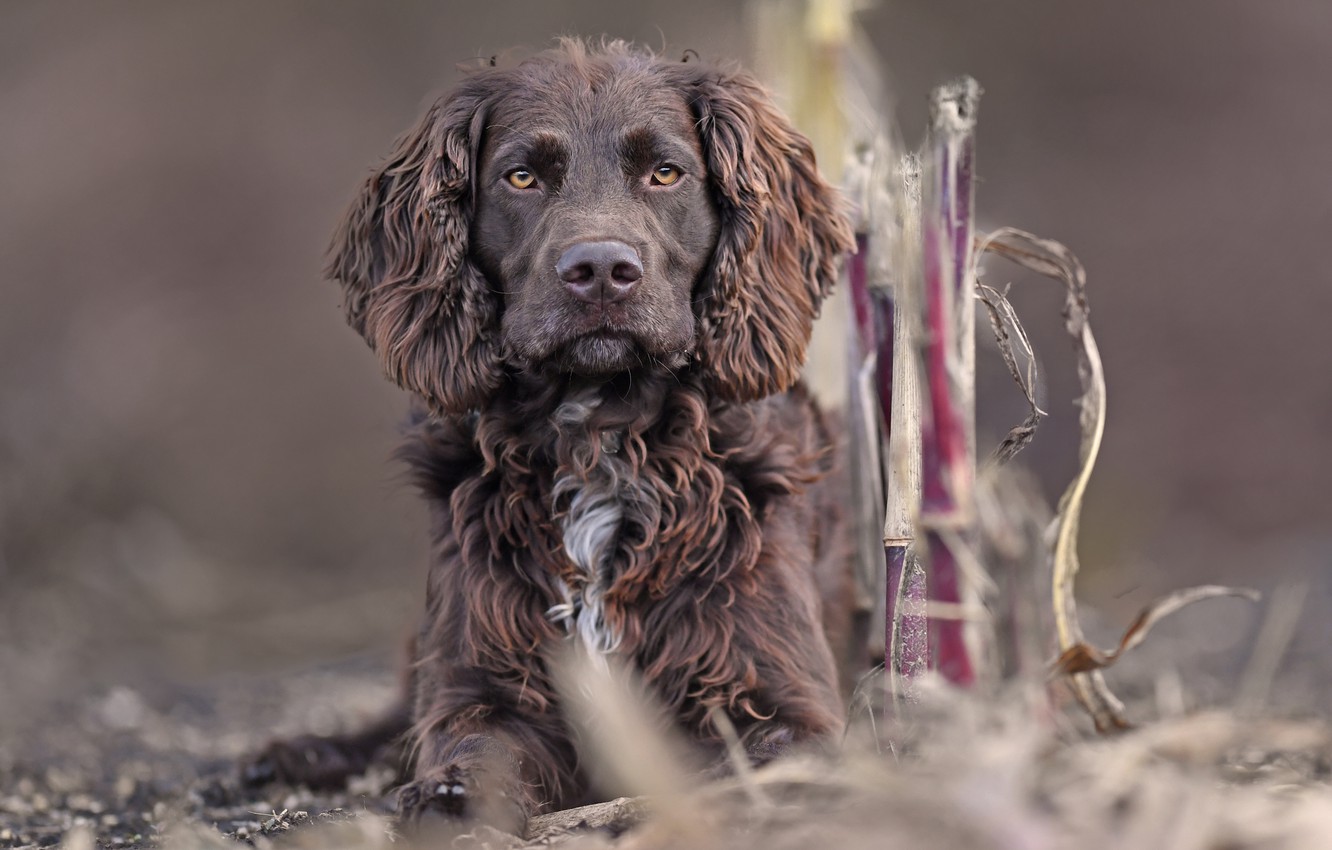 This passionate hunter is only suitable for – you guessed it – hunters. Responsible breeders will only pass their offspring to hunters. It is ideal if, as a professional hunter, you are looking for a dog that also harmonizes well with your family. Because the quail is a very pleasant roommate in the four walls who gets along well with children. Of course, he is also suitable for a single household, but he shouldn’t have to be alone often. It goes without saying that this four-legged friend is not a city dog ​​and needs a lot of exercise in the fresh air and hunting tasks every day. A cat can live peacefully in the household with a German Wachtelhund. The prerequisite for this, however, should be that the dog was used to velvet paws as a puppy. However, smaller animals should not live in the hunter’s household. Before this four-legged friend moves in, think about suitable care on vacation if you cannot take your companion with you anyway – more and more hotels are now also welcoming dogs and a well-behaved quail is ideal for a hiking holiday in the mountains, for example.

You can only find a German Wachtelhund of puppy age at a reputable breeder affiliated with an association. These are also organized outside of Germany in special associations for quail dogs or hunting dogs – mostly they give their animals – for good reason – only to hunters’ hands. As a rule, they also require the young dog to be taken up to the age of 18 months as part of a hunting training course. Despite the small number of puppies, the demand is high and you may have to wait a few months for your dream dog. However, always make sure that you get to know the parent animals and get an idea of ​​the puppy’s surroundings. The parent animals should appear friendly and balanced and the puppies should be influenced by many things as early as possible. In Germany, the homeland of the breed, around 590 quail dogs saw the light of day in 2016. In other countries, however, only a few breeders are active. It is best to contact special Wachtelhund associations, which can give you an overview of the current and expected litters and put you in touch with breeders.

These will also help you further if you are looking for a fully grown dog. Because one or the other quail in adulthood who has lost his home for various reasons is always looking for a new place of work. These dogs have often already learned a lot, but of course, there is also the possibility that they bring a few “legacy” with them. To find out about the dog’s history beforehand.

We wish you a wonderful time with your German Wachtelhund!