The Great Pyrenees Dog has been a beloved and respected helper of shepherds on the slopes of the French mountains for many centuries. Today the breed has not lost its working qualities but has also proven itself well as a companion and family dog. It is worth considering that large white dogs with attractive smiles are not suitable for everyone. 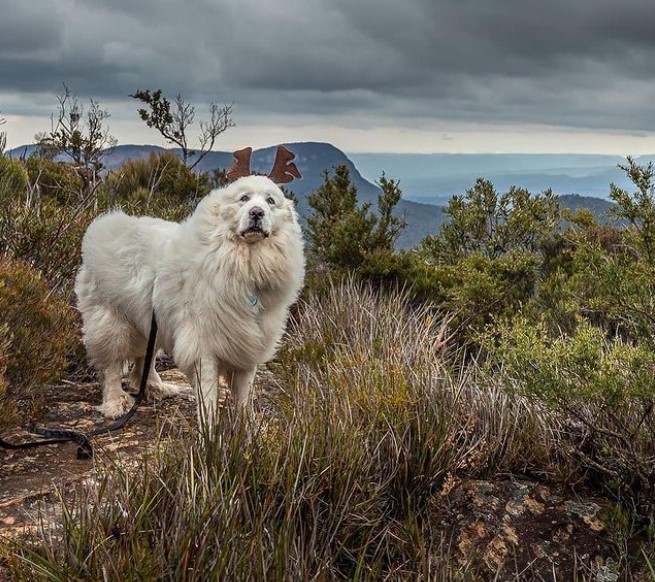 The history of the Great Pyrenees Dogs dates back to southwestern Europe, where they began to be used as shepherds and guardians of the herd. They were known as the Pyrenean Mountain Dogs. France is considered the birthplace of the breed.

Presumably, this group of dogs descended from watchdogs from Asia Minor, who arrived in Europe with nomads about 3,000 years ago. There they encountered the Basques and their dogs. In the isolation of the Pyrenean mountains, the breed was formed in natural conditions and acquired the characteristics that man demanded of it. Undoubtedly, throughout the entire developmental time, there was an influx of blood from other breeds, and similarities with the European gray wolf suggest that they also played a role.

The first written mention of the Pyrenean Dogs dates back to 1407. French letters mention white mountain dogs, the guardians of the castle of Lourdes. In 1675, several dogs were presented to King Louis 14, after which they began to be in great demand and respect. In 1824, General Lafayette brought a couple of dogs to America. A little later, in 1850, the Pyrenean Mountain Dogs appeared at the court of Queen Victoria, and 15 years later the first dogs from the Pyrenees mountains were registered by the Kennel Club in London and shown in the Crystal Palace.

From the mid-19th to the early 20th century, Great Pyrenees Dogs became less numerous. In 1907, work began on the restoration of the breed. The French and Dutch organized Pyrenean dog clubs and combed the mountains for typical specimens. This revival was not the last. The German occupation negatively affected the breed. Several breeders led by Senac Lagrange merged the remains of the two former clubs and formed a new one that still exists today. Today, Great Pyrenees Dogs are not numerous, but this is more likely due to the specificity of the breed, as a whole, the population is not threatened. 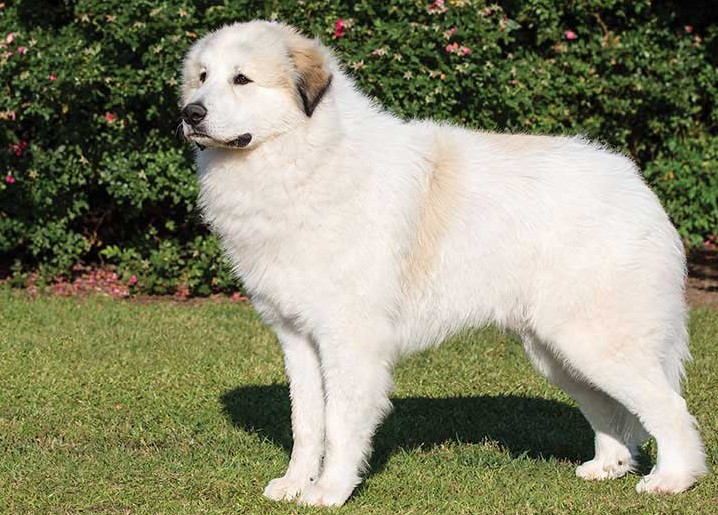 The Great Pyrenees Dog is elegant and strong, slightly over medium in size with a dense, well-balanced build and long white coat. Mentally, physically and in character, she must match the image of a herd protector who works in all conditions, in all weather. Dogs move easily and naturally. The growth of males is up to 80 cm, of females – up to 75 cm. The thick coat makes it difficult to visually assess the size.

Wedge-shaped head with soft outlines and smooth transitions, not too large. Wide muzzle, gradually tapering towards the black nose. The lips hang slightly over the lower jaw. Teeth are healthy, strong, complete with a correct bite. A straight bite and two protruding anterior incisors are also acceptable. The eyes are relatively small, almond-shaped, set slightly obliquely. Ears of small to medium size are flat, set low, and close to the head.

Neck with minimal dewlap of medium length. The top line is horizontal. The chest is oval, moderately broad, and deep. The tail is set just below the line of the back, rather long, very well furred. In a calm state, it hangs down, bending slightly at the end, in an excited state it rises up and twists into a ring. Legs are straight, strong, and well-boned. Feet well-knit, oval in shape.

The coat consists of a long, thick topcoat, straight or slightly wavy, and a thin, dense undercoat. The coat on the face and ears is short, fine texture. The main color is solid white, but gray, pale yellow, or light brown spots on the head, ears, at the base of the tail, and on the body are also allowed. Gray, the so-called badger or wolf, is preferable.

Marks on the body should not exceed 1/3 of the entire surface. On the muzzle, the color is presented in one of three types: 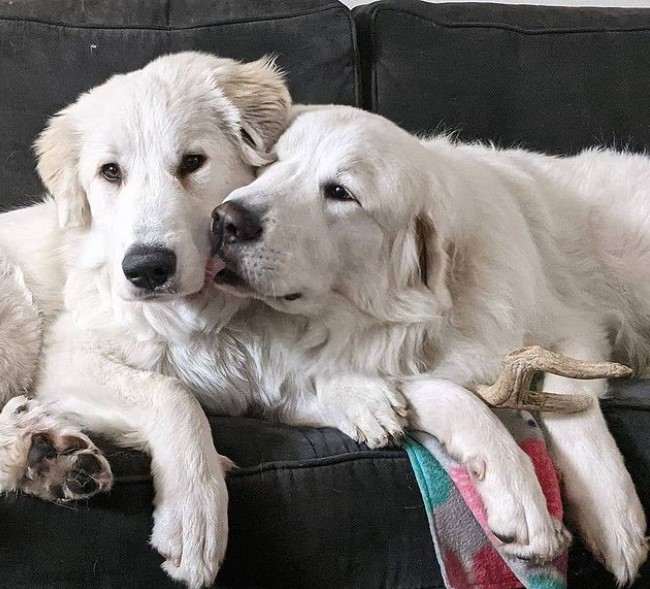 The Great Pyrenees Dog combines strength, extraordinary intelligence, boundless loyalty to family, and an innate instinct to protect. It is a reliable, affectionate, and obedient companion that inspires respect as a watchdog and admiration as a pet. Adults of the breed are calm, love a quiet serene environment. They like it when life is consistent and predictable. They are not suitable for an apartment or a private house with a small yard in the city, where there is a lot of noise and fuss. They will be happy to live in the company of their fellows. Like many other watchdogs, Great Pyrenees Dogs bark a lot, especially at night. They are very intelligent and independent.

The Great Pyrenees Dog is a serious working breed, it will be a companion for outdoor activities, but will not look into the eyes, waiting for a command, nor will it execute it with lightning speed and unconditionally. They are obedient only on business, they will not waste energy. The dogs lend themselves well to training, but they must first be interested and “rocked”. It is advisable to devote time every day to the repetition and consolidation of commands. 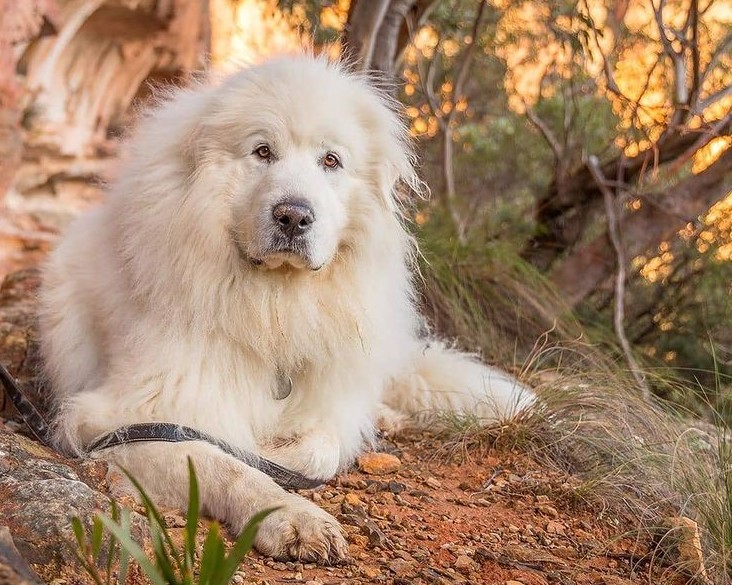 The Great Pyrenees Dog is perfectly adapted for outdoor life, it tolerates rainy weather and frost well. You can not even consider the option of keeping on a leash or in a permanently closed aviary. A prerequisite is the presence of its own sleeping place, where the animal can rest in silence. Usually, a maximally closed enclosure with a spacious booth is built for the dog, in which the vigilant guard is closed for the night, this will give the dog and the neighbors an opportunity to rest. As already mentioned, Pyrenees are very active at night and tend to bark loudly.

As befits working dogs, Pyrenees do not need regular, complex grooming. The white coat is self-cleaning and not prone to tangling. Moreover, dogs should not be combed too often. Brush out enough once a week, only during molting every day. The ears are examined once a week and cleaned as needed. It is imperative to monitor the length of the claws, especially on the dewclaws, which do not grind off on their own, without shortening they will twist and cut into the skin. They bathe no more than once every 3-4 months. Dry shampoos can be used in between. 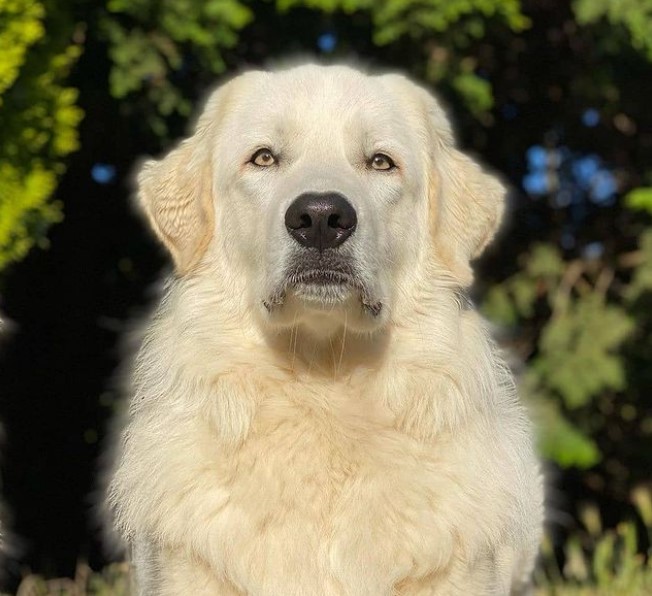 The Pyrenees are large, hardy, and strong animals with good immunity. Unfortunately, it cannot be said that the breed is completely devoid of hereditary diseases. Among the most common are: