The Samoyed is a popular medium to large-sized dog breed native to Siberia. The name Samoyed comes from the Samoyed people who moved to Siberia a thousand years ago. Samoyed dogs were bred for hard work. Dogs were used for hunting, herding reindeer, guarding houses, and transporting sleds.
Now Samoyeds are rarely used for official purposes, but rather become an excellent family pet. 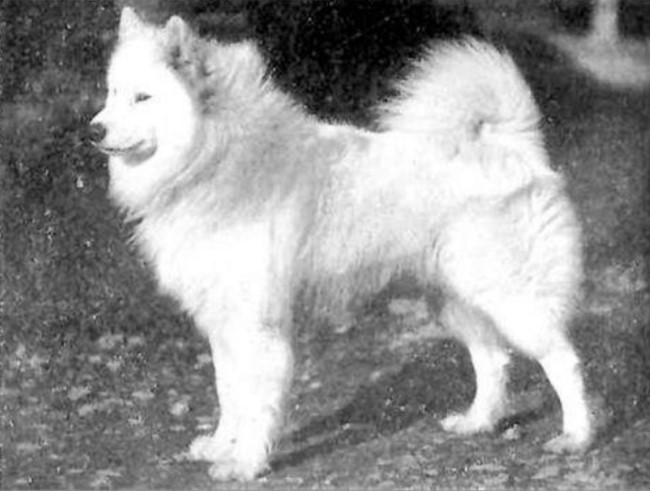 The Samoyed is considered one of the ancient dogs living in Siberia and the Urals. The name of the breed comes from the name of the local northerners – Samoyeds. Those settlers were nomadic in search of food-rich areas. For constant travel, people needed hardy and strong helpers. Dogs helped to transport heavily loaded sleighs, took part in hunting, guarded homes against predators, grazed livestock, accompanied children. At the same time, the animals were not frightened by either the constant frost or hard physical labor. They became indispensable laborers, without whom they could not do.

The English zoologist Ernst Kilburn-Scott made an expedition to the North in 1889 and became interested in the unique local animals. In this way, the Samoyeds were brought to Europe, after which the selection of the dogs began. Ernst Kilburn-Scott and started the first kennel and club of fans of this breed. And already in 1909, the breed standard of dogs appeared, which has hardly changed since that period. Samoyeds are smart, hardy, obedient, therefore they have become excellent companions for a modern person. 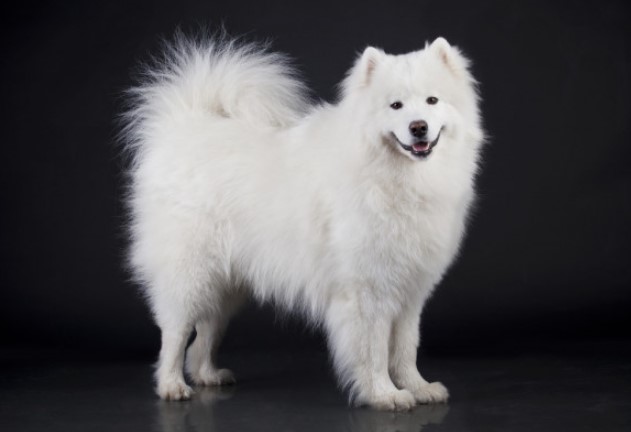 Lovely creatures are characterized by a harmonious build, have a medium-sized body, which is covered with thick white hair. The appearance “exudes” self-confidence and extraordinary dignity. The facial expressions are reminiscent of a smile, which is created by the combination of the shape of the eyes, as well as the dark corners of the mouth, which curl upwards in a funny way. Samoyeds are medium-sized dogs. Height at the withers is 53- 57 cm. The weight of the white fluff is 20-25 kg.

The head is wedge-shaped. The skull is slightly convex, wide between the ears. The stop is well defined, but not too sharp. The nose is black in color, but at certain times of the year or life, it can discolor, creating the so-called “snow nose”. In this case, the dark edging should remain. The jaws are strong with a perfectly correct bite. The lips are dry, thin, usually well pigmented, and black in color. The eyes are dark brown and set wide apart. The shape of the eyes is slightly slanting. The eyelids are also colored black. The ears of the Samoyed are small, erect, triangular in shape.

The Samoyeds have a strong physique with a slightly elongated format. The length of the body is about 5% greater than the height at the withers, and the depth of the chest is slightly less than the height. The back is of medium length, straight. The loin is short, strong, and straight, and the croup is slightly sloping. The limbs are well spaced, well-muscled, parallel. The tail, curled into an incomplete ring, lies on the back.

The Samoyed coat is very thick and double, consists of a short soft dense undercoat and a stiffer long straight spine. A thick collar is welcomed around the neck and shoulders. The hair on the head and legs is short. The tail is very well furred. Females are slightly shorter and softer than cables. A well-groomed coat always gives a beautiful shine. The color ranges from white or cream to biscuit white. 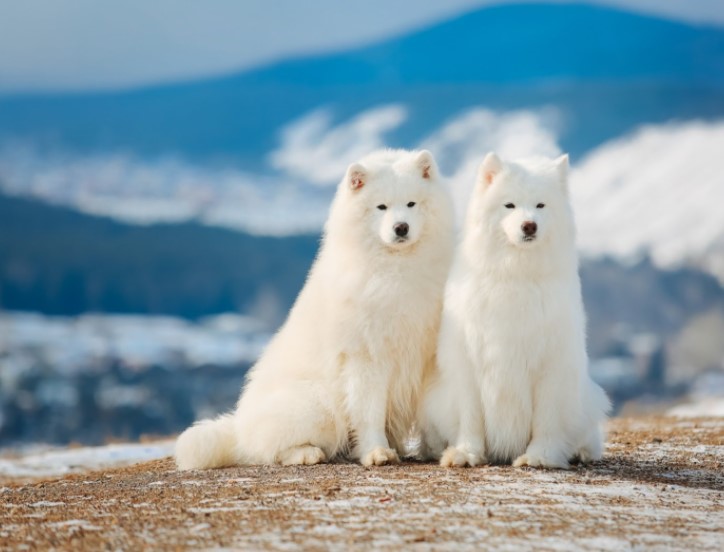 For several millennia, the ancestors of the Samoyed Dog lived next to a person, helping him in everything. Thanks to this, the pet is distinguished by friendliness, patience, tenderness, the ability to hear and understand the owner. Samoyed has become a good companion, gets along well with children and other animals in the family. He has a playful disposition and inexhaustible energy. This helps the animal to win everyone around. Using a Samoyed as a protector is unlikely to work. He’s too gullible and friendly for that. If the dog is alerted by something, he will give his voice and warn of the danger.

Choosing a Samoyed as a pet, you need to understand that dog does not like loneliness. The most comfortable state for her is to be constantly in the family circle, to be a part of any events. Samoyed is uncomfortable if all family members go to work every day, and he is left alone. If there is absolutely no time for a dog, then it is better not to choose this breed. The animal will yearn. In addition, a bored dog shows negative character traits: it begins to gnaw on things around it, bark and howl excessively. If the dog receives enough attention and affection, then, in general, it will not bring inconvenience to the owner. The dog is very intelligent and attentive to the mood. In rare cases, there are Samoyeds with complex characters who do not want to obey. It is better to entrust the education of such a dog to an experienced dog handler who will correct the pet’s behavior.

Despite the fact that Samoyed loves children, her games with babies should be controlled by her parents. The dog is strong enough and can cause injury to a small animal or person by its activity. If you prefer quiet, calm evenings, then Samoyed is not for you. By nature, the dog is dynamic, loves contact games and training. A dog can keep a puppy prank up to two years of age. 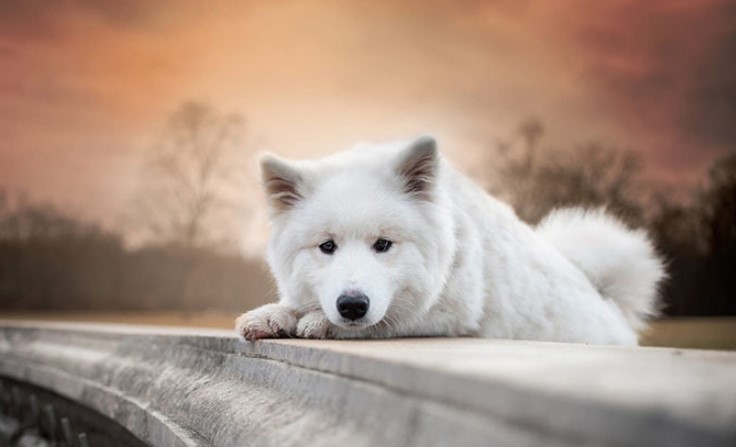 Samoyed is suitable for both apartment and street stays. The dog easily tolerates frost and summer heat. On the street, the pet needs to be provided with a spacious aviary with a booth and good bedding.

Caring for a simple pet and a pedigree show dog is significantly different. If you plan to participate in exhibitions, then the dog requires more careful care. A pet needs bathing with special shampoos no more than 4 times a year since the pet’s coat is endowed with a unique feature – it cleans itself of dust and dirt. Samoyeds have an amazing feature: their thick coat does not emit a specific smell. Molting occurs twice a year in females and once in males. To prevent the wool from getting tangled, it is combed out several times a week. To do this, you need to purchase special brushes. The condition of the ears should be monitored. As they become dirty, they must be cleaned with special solutions using ordinary cotton pads. The hair on the paws (around the toes) should be trimmed and the nails sharpened.

Dogs need active and long walks since physical labor is inherent in their nature. You should walk with the Samoyed several times a day, at different times of the day (evening and morning, for example). In the summer heat, it is better to avoid exercising in the midst of the sun.
When the dog is alone, offer toys, artificial bones, and sticks. So, it is easier for a pet to brighten up his leisure time. The rest of the time, find strength for the dog, she will thank you for this with immense love and devotion. 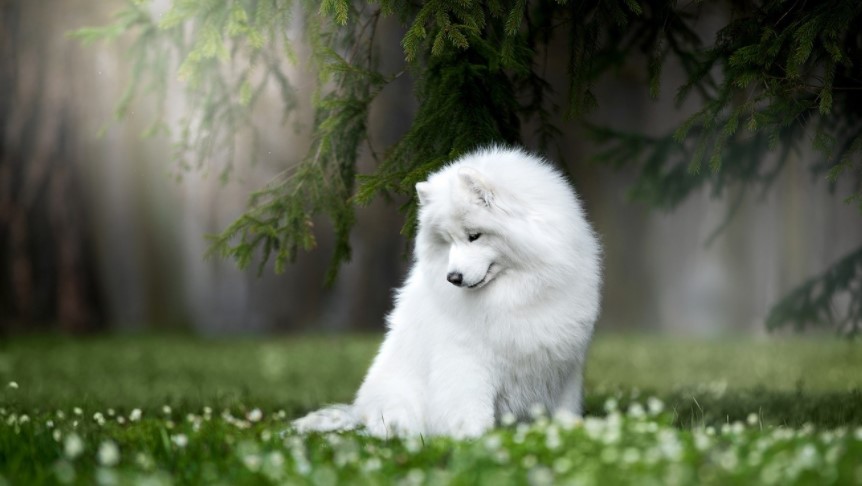 By nature, the Samoyed has strong immunity, inherent in the harsh Siberian living conditions. The development of some diseases is not excluded, which may include:

Improper diet can lead to urinary tract disease and arthritis