Black-striped cichlazoma is one of the smallest representatives of its group. However, despite its small size and relatively calm nature, it is characterized by pronounced territoriality. You will learn about the features of keeping this fish from our article.

Black-striped cichlid (Amatitlania nigrofasciata) is one of the first Central American cichlids to appear in hobbyist aquariums. But for more than a century of history, the interest of aquarists in the maintenance of this fish has not weakened. And even if it does not differ in bright, conspicuous coloring, unpretentiousness to the conditions of detention and interesting forms of behavior have made it popular for more than a decade.

When you add a fish to a common aquarium, you must take into account its territoriality. There are cases when the black-striped cichlazoma while protecting its nest, attacked much larger fish. But, excluding the spawning period, such skirmishes occur quite rarely if the volume of the aquarium and neighbors are correctly selected.

Breeding black-striped cichlazoma will not be difficult. The process usually occurs spontaneously and without intervention from the aquarist. 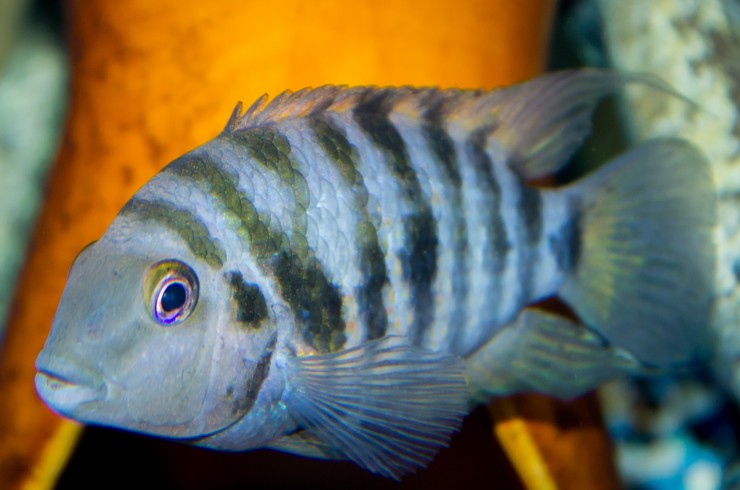 Black-striped cichlid differs from most other cichlazomas in its small body size. In an aquarium, fish rarely grow more than 10 cm. Males are larger than females. Their body is slightly elongated in length and compressed from the sides. The large head has large eyes and a mouth with thick lips. 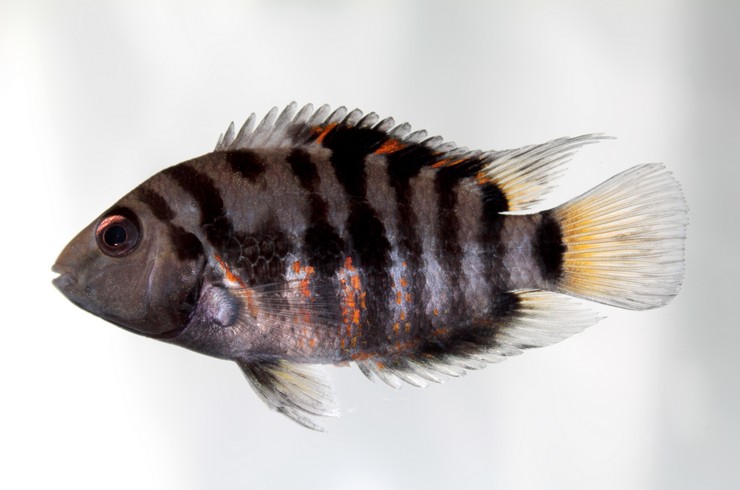 The main color of the body is grayish-blue, along the body there are wide transverse black stripes in the amount of 8-9 pieces, for which the fish got its specific name. Behind the gill covers, the stripes often form the Latin letter “V”. You can also find albinos on sale. 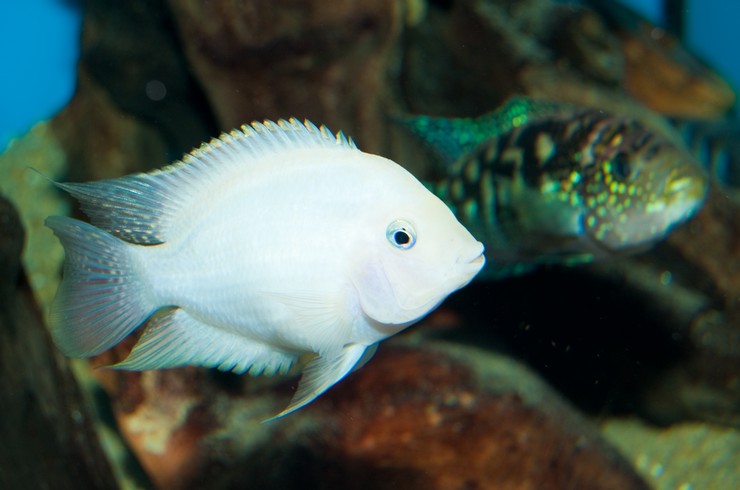 The first specimens of black-striped cichlazoma were described in 1867, and 60 years later the fish successfully reached Europe. Cichlazoma is found in a wide area of ​​Central America from Guatemala to Panama. Nowadays, it is often found in the waters of the southern states of the United States.

The typical habitat of the black-striped cichlazoma is small and large rivers with a fast flow and a rocky bottom. In such conditions, it is not difficult for fish to find a refuge for themselves, in which they can hide from enemies and lay eggs. It is almost impossible to meet cichlazoma in open spaces. 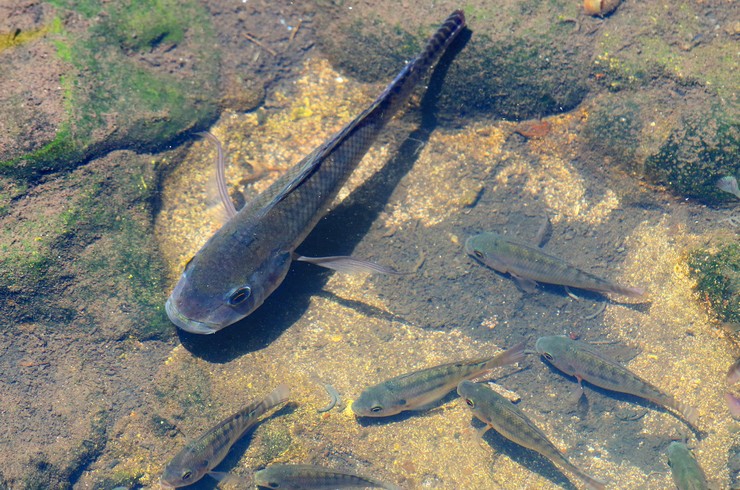 The most important thing to consider when keeping black-striped cyclases is their territoriality. Hence follows the minimum volume of the aquarium for a comfortable life and the features of its decoration.

It is best to keep a couple of young black-striped cyclases in an aquarium of 100 liters or more. Sexually mature individuals will already require 250 liters or more. It is worth noting that we are talking, first of all, about common aquariums, in which other types of cichlids will be located. If a species aquarium is planned, then a volume of 60 liters for a couple of fish will be quite enough.

Black-striped cichlazomas prefer clean, oxygen-rich water, so it is recommended to install an external filter and a compressor of sufficient capacity. The brightness of the lighting does not play a special role. 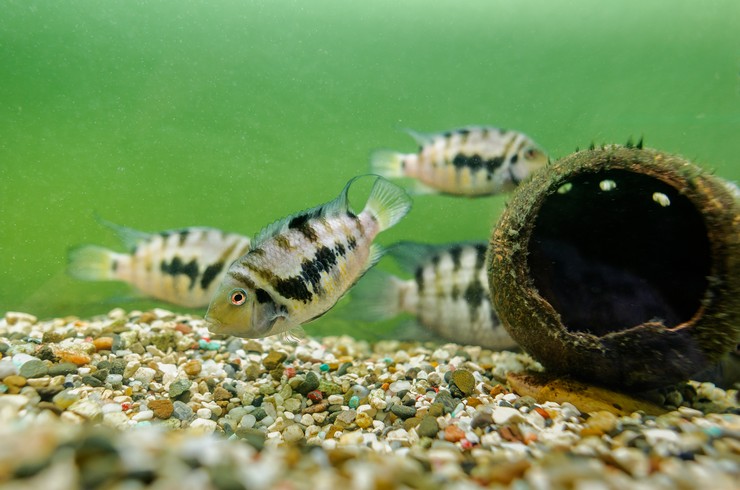 Careful attention must be paid to the interior design of the aquarium, especially if the fish are kept with other species. Pebbles of fine to medium grain size are well suited as soil. Black-striped cichlazomas love to dig up the soil. For the same reason, it is not recommended to use fine sand.

A large number of shelters are vital for black-striped cichlids. Folded slides of stones, natural driftwood, large shells, flower pots, halves of coconut shells can play their role. Each pair of fish must necessarily have its own corner in the aquarium, limited in a natural way. If this moment is overlooked, there will be regular skirmishes. Territory zoning is also possible by planting hard-leaved plants (Anubias, Cryptocorynes, Vallisneria). It is better to plant them in special pots or strengthen them well with stones.

The life span of black-striped cyclases in an aquarium is 8-10 years.

When black-striped cyclases are kept together with other species of fish, there are situations when cohabitation is not complicated by anything, and the opposite – the fish show aggression towards neighbors. In general, these are quite peaceful cichlazomas, problems arise either during the spawning period or with the active invasion of other fish into their space. Defending their territory, black-striped cichlazomas rush without fear at any, even unequal rival. Thus, these aquarium “egoists” are able to endure any neighbors as long as they do not swim close to them.

When keeping in a species aquarium, it is necessary to ensure that there is at least one female for each male. The best neighbors for cichlases will be commensurate cichlids: pelvicachromis, pseudotrophies, diamond cichlazomas, handsome Chromis. In some cases, black-striped cichlazomas coexist perfectly with large barbs, sword-noses, and thorns. But friendship with various types of bottom fish (labeo, bots, corridors, torakatum) does not always work out well. This is due to the fact that cichlazoma eggs are usually laid near the bottom, and fish constantly scurrying near the ground will often encroach on their territory, so they will not do without fights.

Small schooling fish species are very likely to become live food for black-striped cichlases, but giant cichlids – astronomies, acars – can themselves clog with cichlases, therefore they are also not good neighbors.

Black-striped cichlazoma belongs to omnivorous fish, that is, both animal feed and vegetation must be present in its diet. The fish eats well all types of food: live, frozen, and dry. But it should be remembered that live food carries the risk of infection with bacterial and fungal infections, as well as parasitic worms and protozoa. Frozen feeds are inadequate and cannot fully meet the nutritional requirements of fish. It should also be borne in mind that overfeeding such foods can quickly degrade the water condition in the aquarium.

Dry food is completely devoid of the disadvantages of the previous two, therefore, it is the best choice for feeding black-striped cichlases. Small Tetra Cichlid Mini Granules work well for juveniles. Their size is selected in such a way that fish with a small mouth can easily swallow food. Adult cichlazomas can eat the larger floating Tetra Cichlid Sticks. Due to their shape, they take the form of natural food, and a specially selected composition fully satisfies the nutritional needs of cichlids.

Alternatively, the TetraMin Granules basic food for all ornamental fish can be used. Slowly sinking pellets will be easily caught by black-striped cichlazomas, which prefer to swim in the middle and lower layers of the aquarium.

Several times a week, TetraPro Algae chips with a high content of spirulina algae should be added to the fish diet. Eating plant-based foods is important for the proper digestion of black striped cichlases.

It is worth remembering that fish are prone to overeating, so it is best to feed them 1-2 times a day with a small portion.

There is a joke among aquarists that black-striped cichlazomas are fish that can spawn while you carry them home in a bag. And there is definitely some truth in it. Breeding with cichlases is usually straightforward and occurs spontaneously in aquariums without special training. The process can take place both in the spawning and in the general aquarium. But the first method is preferable, as it avoids subsequent encounters with other fish species. An alternative is to use a Plexiglas perforated partition. In this case, the spawning couple must leave at least one-third of the aquarium. 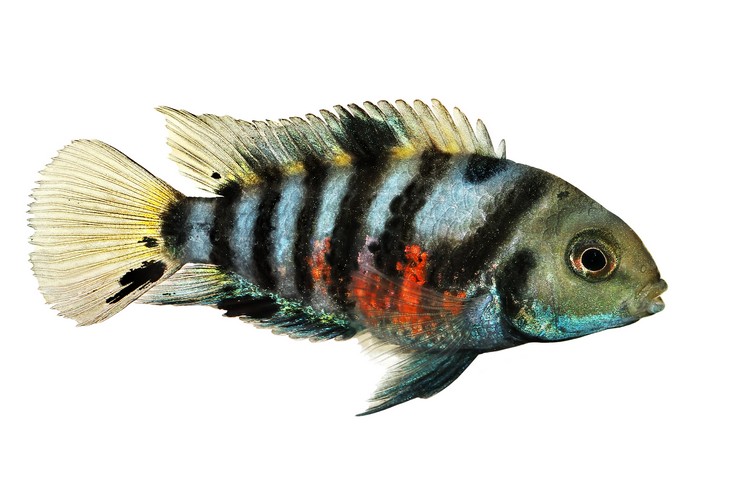