The Miniature Bull Terrier, like the Bull Terrier, is the gladiator of the dog world. However, due to its small size, this dog can better fit into the conditions of a city apartment.

Despite its somewhat frightening appearance, the Miniature Bull Terrier is an affectionate, affectionate, gentle dog towards people. However, if a relative touch him, this dog will rush to the attack and will fight for life and death. They never give up!

The Miniature Bull Terrier is quite unpretentious, but at the same time full of ebullient energy, so if you decide to get this dog, get ready for long active walks in any weather. 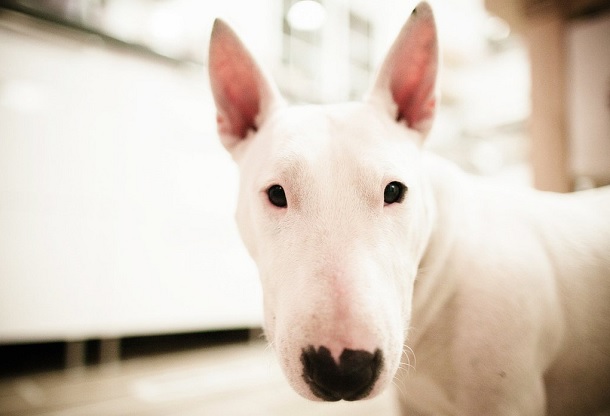 The Miniature Bull Terrier is not easy to train, so you have to be patient and calm in any situation. If patience isn’t your forte, you might want to consider choosing a different breed.

The history of the Miniature Bull Terrier breed dates back to the UK in the 19th century. It was at that time that Bulldogs began to be crossed with white English Terriers. The puppies were different, so they were divided into 3 groups:

Small puppies were periodically born in large bull terriers. They proved themselves to be excellent rat-catchers and became the winners of rat-killing competitions.

In 1938, fans of the Miniature Bull Terrier breed petitioned the Kennel Club to re-register these dogs and to have growth as a criterion for “correct” size. The Kennel Club went along and set an upper limit for height (14 inches) and weight (20 pounds). Later, when the standard was adopted, growth was left as a limitation, and the weight limitation was removed.

And although these dogs have participated in exhibitions since 1963, 1991 became a turning point in the history of the Miniature Bull Terrier breed. It was then that the final breed standard was adopted. Since then, the popularity of the breed has grown.