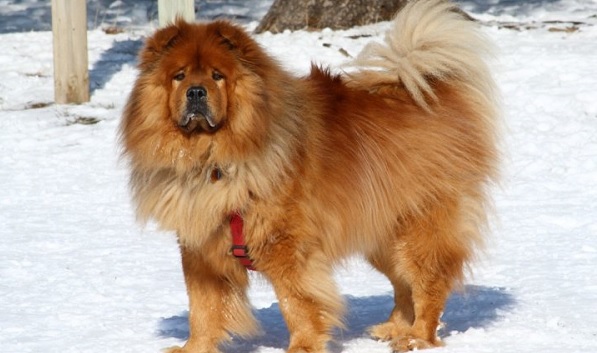 Chow Chow is an ancient Chinese dog breed dating back to the Shan Dynasty. The most famous and easily recognizable images of this dog are presented on pottery and sculptures of the Han Dynasty (206-220 BC). Moreover, images of this breed are also found in ancient, from the time of Guangxi-Zhuang, prehistoric rock flower frescoes (excavations of frescoes of the so-called spring-autumn period). Chow-Chow belongs to the Spitz type. Some Chinese scientists suggest that the blood of the Samoyed Laika, Pomeranian, Norwegian Deerhound, and Dutch Poodle flows in the veins of this breed. According to ancient Chinese historical records, this dog was distributed south of the 5 ridges, in the provinces of Guangdong and Guangxi (modern Henan Hebi). Every spring and fall, it was paid as a tribute to the emperors of the Shan Dynasty. During the Warring States Period, the Chow Chow was one of two popular hunting breeds. During the Tang Dynasty (7th century AD), 100,000 hunters and 2,500 Chow Chow dogs served at the court.

One of the characteristic features inherent in the breed is the body of a square format. The length of the body, measured from the shoulder-blade joint to the point of the buttock, should be equal to the height at the withers. The body is compact, wide, deep, with well-developed muscles. The topline is short and straight. The chest is broad, muscular, deep, reaching down to the elbows. Seen from the side, the forechest extends forward beyond the shoulder line. Ribs well sprung. The arch of the front ribs is slightly tapered downward to allow the shoulder, upper leg, and elbows to fit exactly into the chest wall. The loin is short, muscular, wide, and deep. The croup is short, wide, and even.

A keen mind, independent disposition, and innate dignity give the Chow-Chow a certain alienation. Chow has an inherent discernment and restraint with outsiders. Due to deep-set eyes, the Chow has limited peripheral vision, and it is better to approach the dog from the front.