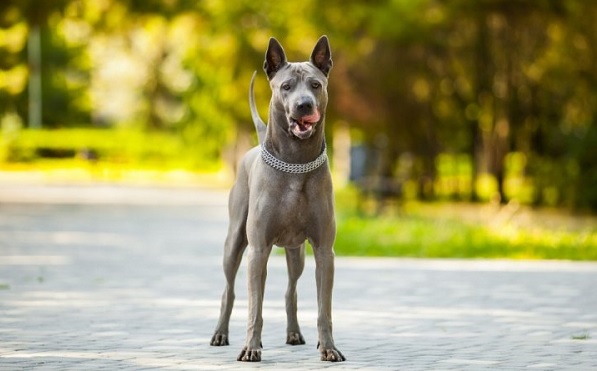 The breeding of the Thai Ridgeback began several hundred years ago, on the lands of Thailand that were closed to Europeans at that time. It is a unique species, little known outside the eastern region. Recently, the Thai Ridgeback is rarely found in Bangkok. One American exported several of these dogs to California. Also known as Mach Thai dogs, they have been used as watchdogs for centuries. The Thai Ridgeback is a classic example of crossing a Spitz dog and a common hound. The Thai Club (Thai Dogs Association) has confirmed that this unusual breed will develop in the country. The Thai Ridgeback is a medium-sized pariah dog with a wedge-shaped head, erect ears, and a short, smooth coat. The length of the body from the shoulder to the buttocks is 10% greater than the height at the withers. The depth of the chest is equal to the length of the forelimbs. The dog holds the tail straight up or curved in the shape of a sickle.

The length of the body from the shoulder to the point of the buttock is slightly longer than the height at the withers. Ribs well sprung from the vertebral column to form a strong back. The back is straight, muscular; the loin is broad, muscular, slightly arched. The chest is moderately broad, dropping down to the elbows. The falcon should pass between thin limbs, but not bend too much towards the sternum. The abdomen is moderately tucked up. The croup is broad and moderately sloping. The skull looks flat from above, gradually (not very sharply) tapering towards the muzzle; eyes are dark brown, almond-shaped; large drooping ears of a triangular shape are tilted forward; elongated, strong muzzle; strong, trimmed neck, powerful shoulders, solid muscles, rounded body.

A characteristic feature of the breed is the “crest” on the back – a strip starting at the withers and stretching along the back to the tail, within which the coat grows in the direction opposite to the rest of the coat. They are very active and agile dogs that can jump and climb well. Very loyal to their family, but suspicious of strangers.