The poodle has beautiful hair that sheds very little. But the coat of the breed representatives needs care. Without regular brushing, curly hair gets tangled in tight knots and tangles that will eventually need to be cut with scissors. 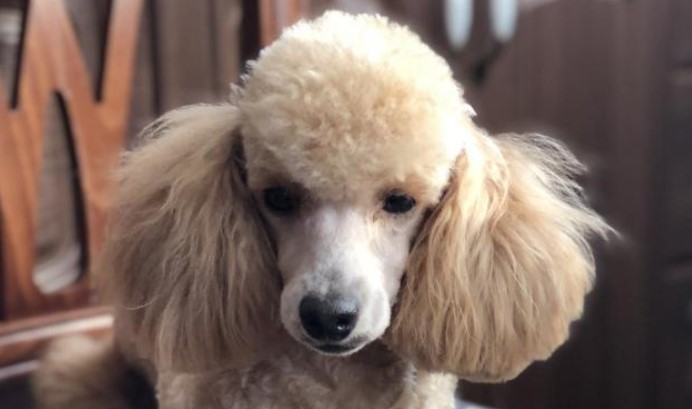 A special feature of the slicker is short, thin metal teeth, located on a wide surface. The bristles are quite soft, some have rounded heads at the end to prevent damage to the skin. The tool is intended for whipping hair during drying or cutting. The wire bristles lift the coat while removing dead hair and trapped debris. In addition, close-spaced bristles help to detangle hair when brushing.

The tool should be used carefully, without applying too much pressure, so as not to scratch the skin of the animal. When untangling tangles with a slicker, hold the hair with one hand so that the skin does not stretch. For poodles with long and curly hair, it is advisable to purchase slicker shoes with longer teeth.

Together with a slicker, which serves as the main tool, a rake is used. The tool is designed for deep penetration into the coat and removal of dead hairs located closer to the skin. The tool consists of one or two rows of long teeth. It is used carefully, avoiding damage to the skin.

At the finishing stage, you can use an oval-shaped massage brush with flexible, long, rounded (but not with plastic or metal balls that damage the hair) on the tips of the teeth. Allows you to remove dead hairs that get stuck among healthy hairs when falling out. Suitable for hair on all areas of the body. Suitable for daily grooming.

For representatives of the breed, whose coat is short due to age or haircut, a narrow brush with elastic natural bristles is suitable.

The metal comb helps to find and get rid of small knots, tangles. The best option is a comb with long (3-5 cm) and sparse (5-7 mm) teeth, which is used for preliminary combing and detection of tangles, and a comb with short (2.5 cm) and frequent (3-4 mm) teeth with rounded tips.

A narrow top-note comb may be required if a bun is practiced at the crown of the head.

Stages of Combing a Poodle

The dog is placed on a grooming table or any other surface, the main thing is to take care of the convenience and safety of the procedure. Before grooming the hair, the ears and claws are cared for.

Using a slicker, they first check how painful the pressure on their own hand is, in order to understand with what force to comb the coat.

Poodle owners prefer to brush the coat in layers, starting with the body above the elbow, in a horizontal line along the entire side. Parting is done, combing the hair from root to ends below the parting in the direction of growth, then passing over the hair over the parting against the growth.

After the slicker, they are passed with a comb, revealing tangled areas, and only after making sure that they are not there, they move on to the next layer, making a new parting a couple of centimeters higher than the previous one, gradually approaching the back and neck.

On a note! The tangles are untangled with the fingers using a metal comb or a slicker. Slightly tangled hair can be easily parted with your fingers. Tight mats will have to be disassembled with combs, but you should start with the tips. First, use a slicker, then a comb.

Quality shampoo and conditioner can help prevent tangles. It is recommended to apply a conditioner solution from a spray bottle before the procedure so that the hair does not get injured and does not build up static electricity. The hair is slightly moisturized, the moisture evaporates quickly, but the hair is not dry.

Upon completion, the side of the body is treated with a massage brush. Then they move on to the neck and abdomen. Next, the front leg is combed, layer by layer, starting from the bottom from the side, going to the front side, then again to the side, and only lastly moving to the inner side. After the front leg is processed, they move to the hind leg. The hind limb begins to comb from the thigh, moving downward. Having coped with one side, the wool on the other side is treated in the same way. They show accuracy and devote more time to problem areas, namely the armpits, behind the ears, elbows, knees, hocks, where the hair often and sometimes rolls strongly.

Then the dog is put on its feet, they begin to lay the hair along the spine, starting from the neck to the tip of the tail. There is no need to pull the tail. Last but not least, attention is paid to the hair on the head, ears, front of the chest.

The ears are combed, starting from the inside, gently, carefully, gradually moving to the outside. Behind the ears, the hair is as thick as on the whole body, it is often confused due to the fact that dogs itch with their paws. Therefore, you need to be careful so that the process does not turn out to be painful for the dog.

It is convenient to scratch the front of the chest when the dog is sitting. Start from the bottom point, working your way up in layers, similar to the process of processing wool on the side of the body.

On a note! In the process of laying, the skin should be examined for rashes, redness, the presence of ectoparasites, dandruff. After completing the procedure, the pet is given a treat, praised for good behavior.

It is recommended that you brush your pet daily to maintain a clean and well-groomed coat. But not everyone has such an opportunity, so you need to carry out the procedure at least once a week. In addition, be sure to brush your pet before bathing.

After water procedures, dry and comb the poodle’s coat at the same time. You need to comb the coat against the direction of hair growth, pulling it up a little, as if putting it on. After combing, the wool is dried with a hairdryer, keeping it fluffed with a brush.

At the end of the procedure, the dog is praised, allowed to shake it, so the coat will take its natural position.

How to Accustom to the Procedure

It is better to accustom your pet to this procedure from an early age, already from 6 weeks. Puppies’ coats are easy to care for, as their hair is not as curly and thick as in adults. There is a difference in the care of dark and colored coats. Some individuals of white, light apricot, and champagne have more cotton-textured hair, so they are most often given a haircut.

Laying the puppy’s coat is enough for 5 minutes, but after each procedure, give a treat. Puppies, in which the formation of cords is planned, are scratched only until the puppy’s coat changes to an adult one.

It is recommended that older puppies are combed out on the grooming table or on the floor if it is comfortable for you to sit on your lap. The surface is covered with anti-slip material to ensure the safety of the animal if it is at a height. You can brush the poodle when it lies on its side, so the pet gets less tired.