Typically, the herbivorous megafauna is presented as a group of elephants, rhinos, and giraffes. However, one of the most specific representatives of the megafauna is the Indian bull. With a height of under 3 meters (10 feet), the gaur is truly a giant animal and the largest wild cow in the world. This massive creature with truly enormous horns can burst through the forests and fields of India, sometimes destroying gardens as well. 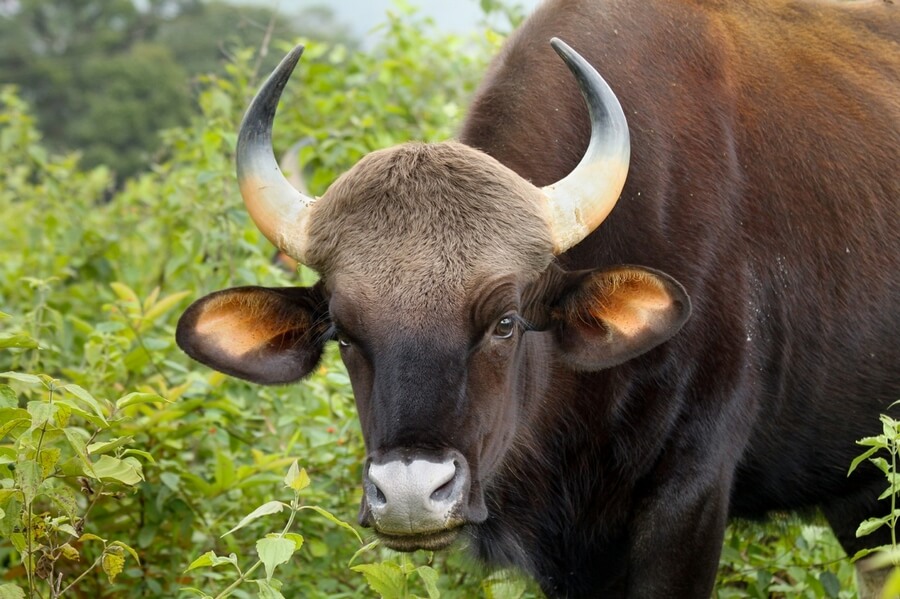 This species is endangered, although it is not afraid of most threats and weighs up to 1600 kg (3500 lb). Among the megafauna that can smash its way through tropical vegetation, only elephants, rhinos or giraffes can get bigger and taller. Gaur is more obedient than the African buffalo, but sometimes there are human casualties. There was a case when a tiger attacked the gaura. Gaur literally tore the tiger in half. 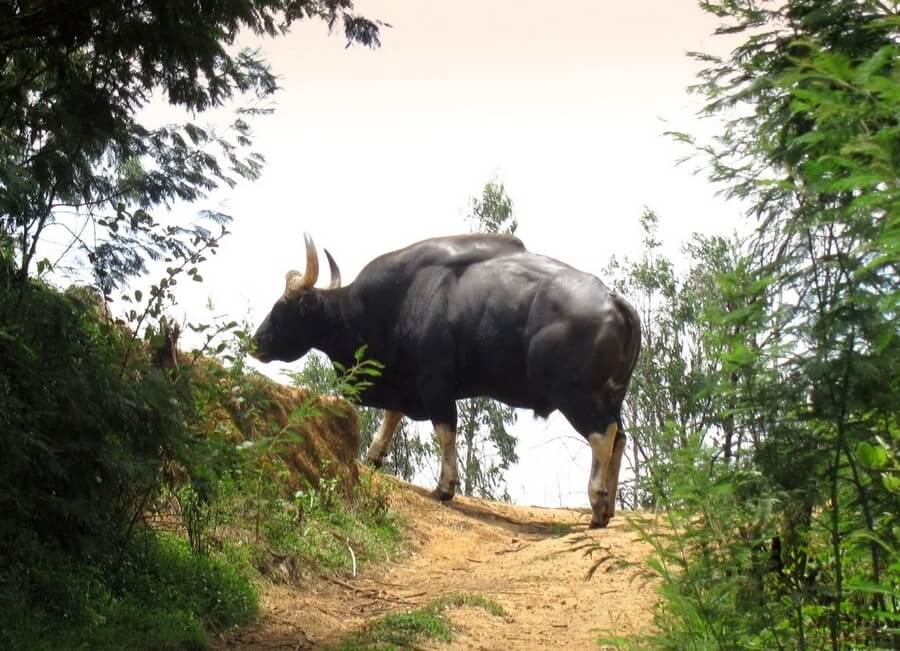 Few of the wild bulls can match the gaur in beauty, strength, and size. This is perhaps the largest bull in the world, and therefore the largest representative of the bovine family, both today and in prehistoric times. The 68 cm long gaura skull is larger than any giant bison skull. It is not only the largest and strongest but also the most beautiful of the bulls. 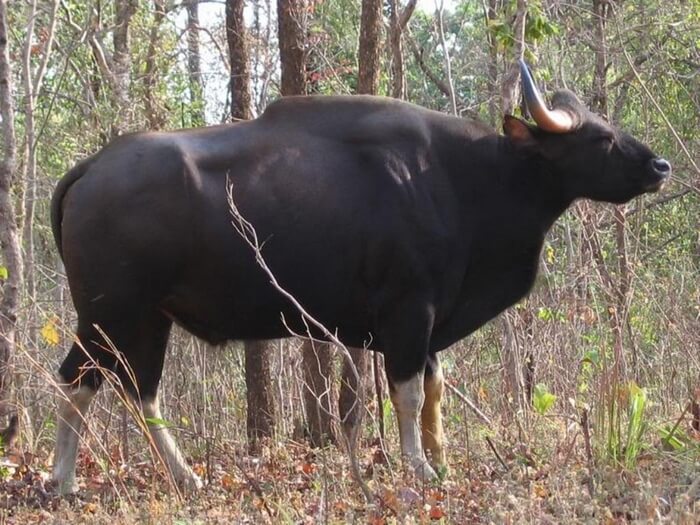 Gaura is sometimes referred to as the Asian bison, and indeed, in his constitution, he resembles a little his American relative. Gaura is distinguished from other bulls by a very powerful physique, relief muscles, and an imposing appearance.

If the appearance of the African buffalo can symbolize indomitable power, then the gaur personifies calm confidence and strength. The height at the withers of old males reaches 213 cm, weight -800-1000 kg. Thick and massive horns from the base are bent slightly down and back, and then up and slightly inward. Their length in males reaches 100-115 times, and the distance between the ends is 120 cm. The forehead is wide, flat. Gaura females are much smaller, their horns are shorter and thinner. The hair is dense, short, close to the body, the color is brilliant black, less often dark brown, on the legs of animals are white “stockings”. Although the range of the gaura covers a huge territory, including India, Nepal, Burma, Assam, and the peninsulas of Indochina and Malacca, the number of this bull is small. In fact, it has survived only in national parks and reserves. Not only hunters are to blame for this, but also frequent epizootics of foot and mouth disease, plague, and other diseases. 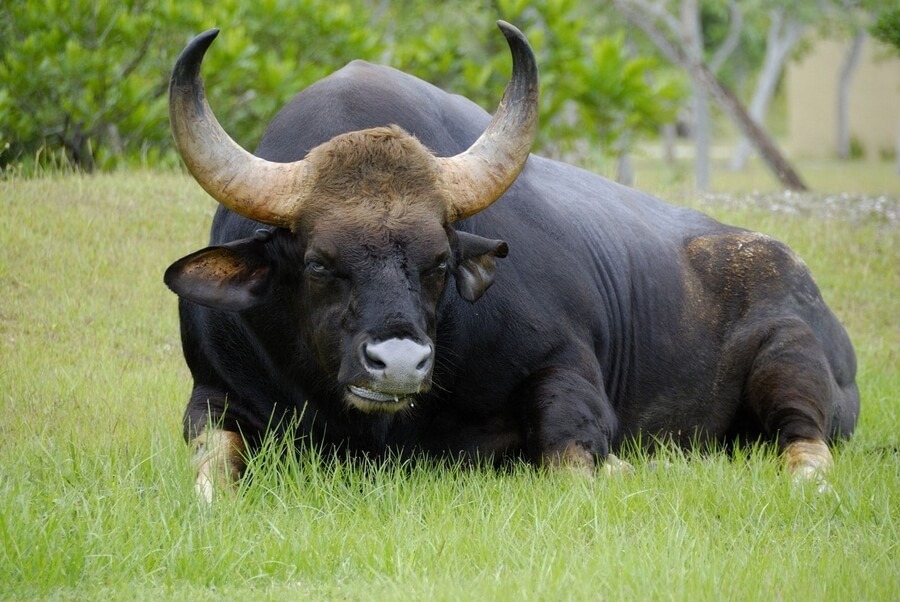 True, the strict ban on hunting throughout the territory and vigorous quarantine supervision seem to have marked a certain turning point in the position of the gaura, and its number has increased somewhat in recent years. Gaur inhabits wooded areas, preferring mountain forests up to 2000 m above sea level. However, it avoids continuous forests with dense undergrowth and stays in clear-cut areas near clearings. At the same time, gaura can be found in bamboo jungles, as well as on grassy plains with shrubs. He resolutely avoids cultivated land. Gaura’s favorite food is fresh grass, young bamboo shoots, and shrub shoots. He needs regular watering and bathing, but, unlike buffaloes, he does not take mud baths. Gauras graze early in the morning and before sunset and sleep at night and at noon. Gauras are kept in small groups, which usually include 1-2 adult bulls, 2-3 young bulls, 5-10 cows with calves, and adolescents. Along with this, groups consisting only of young bulls are not uncommon. Adult strong males often leave the herd and lead the life of hermits. 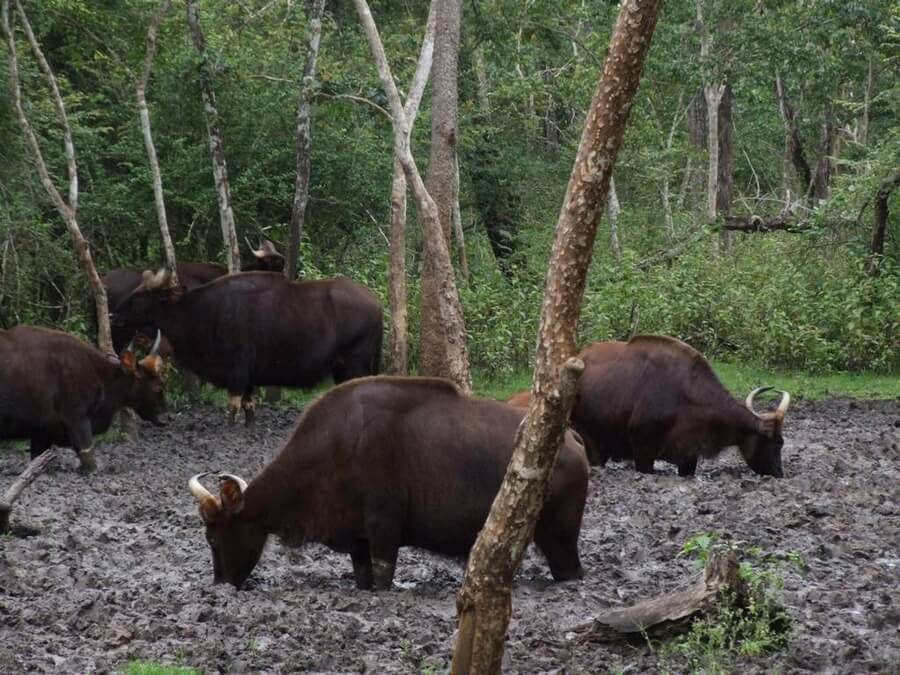 In a herd of Gauras, a certain order is always observed. Calves are usually kept together, and the entire “kindergarten” is under the vigilant protection of mothers. The leader of the herd is often an old cow, which, when the herd escapes, is in the head or, conversely, in the rearguard. The old bulls, as observations have shown, do not participate in the defense and do not even react to the alarm signal, which sounds like a piercing snort. Hearing such a snort, the rest of the herd freeze, raising their heads, and, if the source of the alarm is established, the nearest animal emits a rumbling bellow, at which the herd takes up battle formation. An extremely interesting way of attacking the gaura. Unlike other bulls, he attacks not with his forehead, but sideways, and lowers his head low, and crouches somewhat on his hind legs, striking a blow with one horn to the side. It has been noticed that in old bulls one of the horns is noticeably more worn out than the other. The zoologist J. Schaller believes that this style of attack evolved from the usual impressed and threatening posture of the Gauras when the animal shows its huge silhouette in the most impressive foreshortening. 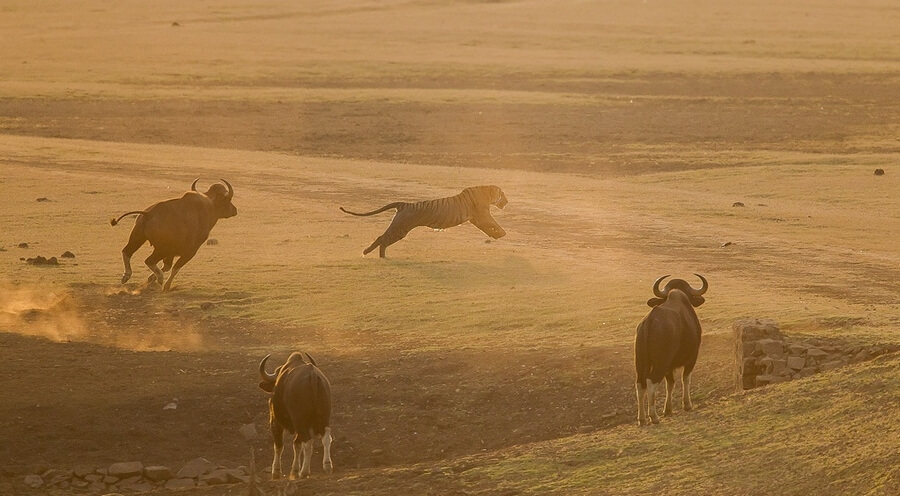 By the way, the fights of the Gauras, as a rule, do not go beyond demonstrations. The Gaura rutting period begins in November and ends in March – April. Solitary males at this time join herds, and fights are not uncommon between them. The peculiar calling roar of the gaura during the rut is similar to the roar of stag-deer and can be heard in the evening or at night at a distance of more than one and a half kilometers. Pregnancy lasts 270-280 days, calving occurs more often in August – September. At the time of calving, the cow is removed from the herd and in the first days is extremely careful and aggressive. She usually brings one calf, rarely twins. The milk-feeding period ends at the ninth month of the calf’s life. Gauras willingly unite in herds with sambars and other ungulates.

They are almost not afraid of tigers, although tigers occasionally attack young animals. The zoologist Olivier describes the special friendship of the gauras with wild chickens, who in 1955 managed to observe how a young rooster for two weeks daily cleaned the festering, damaged horns of a female gaur. Despite the painfulness of this operation, the cow, at the sight of the rooster, put her head on the ground and turned the horn in the direction of the “orderly”. Gayal is nothing more than a domesticated gaur. But as a result of domestication, the gayal has changed a lot: it is much smaller, lighter, and weaker than a gaura, its muzzle is shorter, its forehead is wider, the horns are relatively short, very thick, straight, conical. Gayal is more phlegmatic and calmer than a gaura. At the same time, gayals are kept differently from domestic cows in Europe. 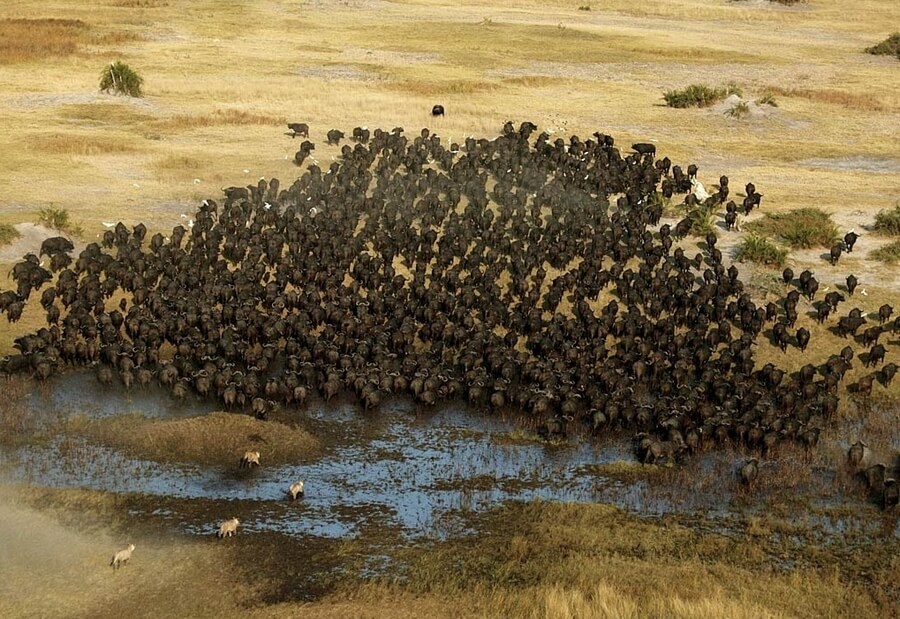 They always graze in complete freedom, and when it is necessary to catch a gayal, they lure him with a piece of rock salt or tie a cow in the forest. Gayal is used for meat, in some places, it is used as a draft force, and among some peoples of South Asia, it serves as a kind of money or is used as a sacrificial animal. Gayal cows often mate with wild gauras.