If the kangaroo senses danger, it gallops to the nearest body of water and climbs into the water up to its chest. If the pursuer decides to approach, then the animal grabs it with its small front paws and drowns the attacker. 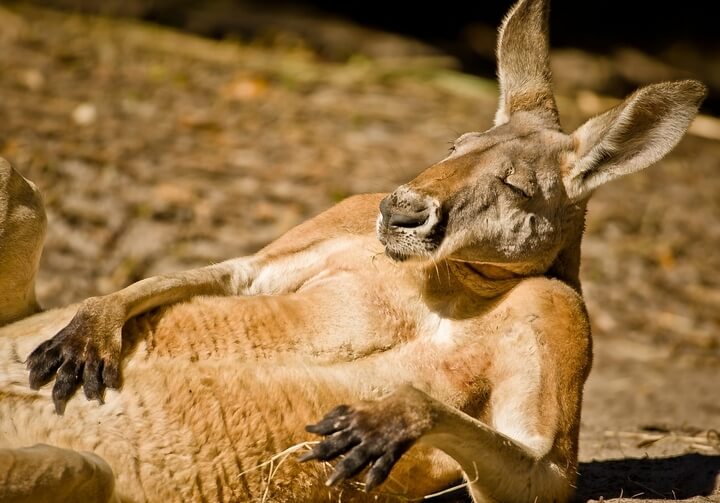 The dogs are outnumbered, but the kangaroo is smarter. In Australia, a kangaroo tried to drown a dog and then attacked its owner. The incident took place near Melbourne, in the small town of Arthur’s Creek. 49-year-old Chris Ricard was walking with his dog named Rocky near his house when he accidentally disturbed a kangaroo sleeping in the grass. The frightened animal tried to run away, but the dog went after him. The kangaroo jumped into the pond, but the dog also climbed into the water. Then the animal began to drown the enemy. The owner came to the rescue of the dogs – Chris Ricard threw himself into the water and tried to recapture Rocky from the enraged kangaroo. As soon as Ricard grabbed the dog, the kangaroo pounced on him and began to beat him. As a result, the man managed to escape. The incident left numerous scratches on the Australian’s face, chest, abdomen, and arms. 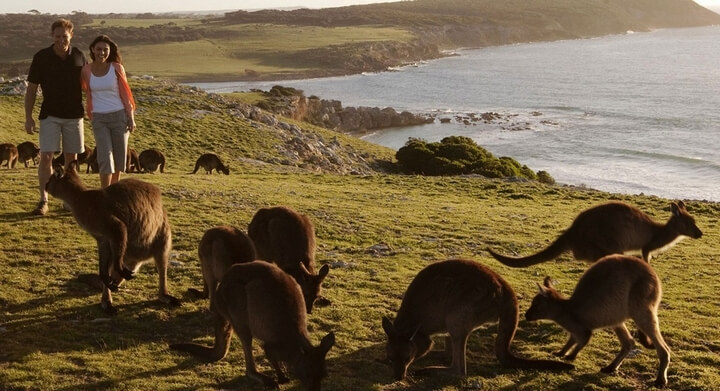 For example, in 2004, peaceful herbivorous representatives of the local fauna – a symbol of the state – went berserk on the Green Continent – they began to attack people and animals. Australian authorities urge their citizens not to approach dangerous creatures.

In the choice of victims, marsupials showed great conscientiousness – like real maniacs, they attack mainly women. Even dogs cannot protect their owners from brutal animals. The other day an aggressive Macropus attacked a lady who was walking peacefully in the park with her poodle.

A few days before, another chilling story happened – a representative of the kangaroo family attacked a dog bathing in a pond and drowned it. “It was something surreal, something like the worst nightmare,” said the 56-year-old owner of the choked retriever Christine Canham.

The woman and her friend happily watched as four of their dogs splashed in one of the reservoirs of the capital when an evil kangaroo unexpectedly flopped down there. He got up on his hind legs and began to drown the dog, glancing angrily at the hostesses. “Please don’t torture him!” – shouted one of them, but the killer just looked at the people, continuing to mock the unfortunate friend of the man. Three other dogs decided to save a relative and rushed to the wild animal. However, they did not manage to do anything either – the killer knocked them down with a powerful blow of the paws.

In March this year, a representative of the human race was also targeted. Sylvia Eldren, 48, was planting flowers in her garden when a marsupial unexpectedly pounced on her from behind. “He knocked the basket out of my hands, and then stood on his tail and continued to beat me with his hind paws,” Sylvia herself said. – On his hind legs, he was taller than me. There was so much hatred in his eyes … ”

Her relatives and friends were simply numb in horror, seeing how the animal repeatedly inflicted strong blows on the mistress, who was trying to get to her feet and run. When the observers finally came to their senses and rushed to the aid of the unfortunate victim, the aggressive kangaroo fled in an unknown direction, and Sylvia had to spend several hours in the hospital to treat the wounds. “I thought I was going to die,” she said. 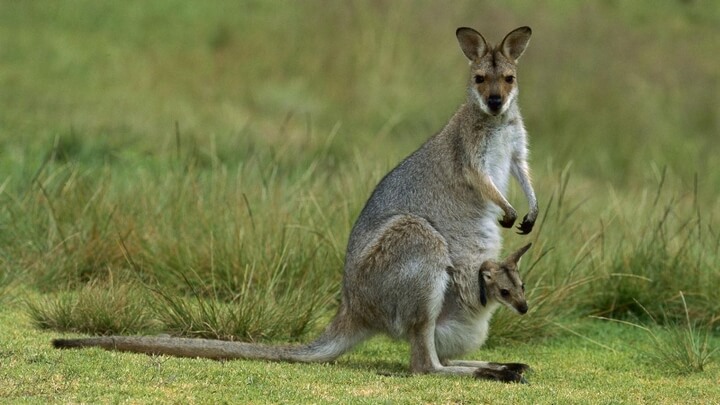 Meanwhile, experts note that an adult of representatives of this family can easily kill or maim a person. Along with the fact that this cute animal has approximately the same size and weight when attacking outsiders, it uses the same boxing techniques as in fights against its own kind.

Apparently, the local scientists were right when they tried to refute the prevailing opinion about the small variety of predators on the Australian continent in prehistoric times. Recall, to prove their assumption, the researchers compared the fauna of the Green continent and South America over a period of 25 million years. According to them, in Australia, there were such cruel creatures as killer kangaroos and marsupial lions. And only now, after millions of years, cute animals have shown their bestial nature.

The Dingo, a wild dog born for hunting and tireless pursuit, does not always prevail over the kangaroo, its usual prey. For the most part, old and sick animals fall into her paws. Escaping, the marsupials make numerous dexterous “feints” and thus confuse their pursuers. A hunted kangaroo often enters a river or lake up to its chest and, if a dingo tries to swim to it, drowns them one by one – keeps them underwater until the dog drowns.

That’s how it is … it means that it drowns …