Dogs of this breed have a predisposition to serious diseases, some of them are hereditary, and some are acquired and characteristic of large dogs. 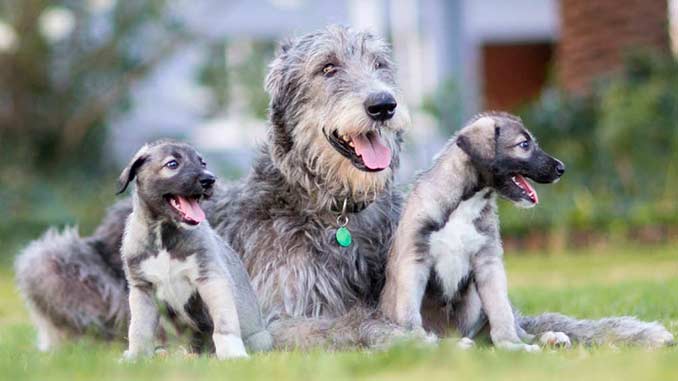 The causes of this disease of the Irish wolfhound are not exactly known, but bloating can occur due to too rapid absorption of food and swallowing air, stress, and genetic predisposition. Bloating is often accompanied by volvulus. As a result of the accumulation of gases, the stomach increases in size, putting pressure on the diaphragm and blood vessels, the blood stagnates and does not circulate properly. Bloating can be fatal without timely treatment.

With bloating, the Irish wolfhound has anxiety and anxiety, increased salivation, heavy breathing, gagging, but often vomiting does not occur. The animal experiences pain in the abdomen, walks with its head down, whines. The condition of the dog is rapidly deteriorating and you cannot do without the help of a vet. Even if veterinary care is provided, long-term treatment is prescribed, the outcome can be sad because of untimely assistance.

Most often, wolfhounds have arrhythmias, which with age can develop into chronic heart failure, von Willebrand disease, cardiomyopathy, in which the muscles of the heart weaken, and in the future, the heart may simply fail. Symptoms at an early age are coughing, fatigue during active walks, exercise, and lack of appetite. It is important to take timely measures to identify diseases, and for this, a pet should be examined once every six months or once a year, starting from the age of two.

Bone cancer occurs in Irish wolfhounds but is not common. A terrible disease that most often affects the legs, in particular, the shoulder, radius, femur, and lower leg bones, leads to serious consequences. Cancer thinning bones, as a result, the bones become brittle, and the dog experiences unbearable pain at all stages of the disease. The first sign of bone cancer may be the appearance of lameness, accompanied by swelling of the limb. At first glance, you might think that the dog has normal sprains, but to rule out the possibility of cancer, an X-ray should be taken. Treatments for bone cancer are limited, but early detection of the disease offers hope for a pet’s salvation. Of course, treatment implies amputation of a limb, removal of the affected area of ​​the bone, and replacing it with a graft, chemotherapy.

All dogs can suffer from cancer of the lymph nodes, but the Irish wolfhound is most susceptible. Most often, lymphoma develops in young or middle-aged dogs. Symptoms are vague, but, nevertheless, observing the pet, you can notice a decrease in appetite, unexplained weight loss, greatly enlarged lymph nodes. The diagnosis is confirmed only after a biopsy. Treatment options and further prognosis depend on the severity of the disease. However, even with timely chemotherapy, it is possible to extend the life of the pet by just a couple of years.

It most often occurs in adult dogs, due to the ingress of foreign bodies, water, food, vomit into the lungs, as well as due to fungal or bacterial infections. Pneumonia in Irish wolfhounds occurs suddenly, develops quickly, and is accompanied by fever, shortness of breath, and coughing. X-rays and blood tests are done to confirm the diagnosis. Moreover, an X-ray cannot always show the presence of a disease, and treatment should be immediate.

Endocrine diseases occur in wolfhounds, most often a decrease in the number of hormones in the thyroid gland – hypothyroidism. It is difficult to independently determine the disease since the symptoms are similar to other diseases. The animal has an increase in weight, a decrease in activity, an increase in skin pigmentation, a deterioration in the quality of wool, namely, the wool falls out, becomes dull. With hypothyroidism, dogs develop skin diseases, ear infections. The disease is not life-threatening for the pet, but it can be asymptomatic for up to 3-5 years. In wolfhounds, like other greyhounds, the norm is low hormone levels, unlike other dogs, and for this reason, the wrong diagnosis is often made, that is, hypothyroidism is detected when it is not there, and treatment is prescribed that is not needed.

Other Diseases of the Irish Wolfhound

Myasthenia gravis is a neuromuscular disease, the symptoms of which are general weakness, difficulty in swallowing food. As a result of the absorption of food, food can enter the trachea and provoke the development of pneumonia. The disease can be congenital or acquired.

Other diseases that Irish wolfhounds are prone to include dysplasia of the hip and elbow joint (rare), eye diseases (cataract, corneal dystrophy, distichiasis, retinal dysplasia), portosystemic liver shunts – a congenital disease in which the liver is impaired due to impaired blood circulation.

One of the problems with Irish wolfhounds is tail damage. As a result of strong wagging, Irish wolfhounds hit various objects with their long tail, hit walls, doorways, etc. The skin on the tail is injured from blows, open wounds appear, while the dog can wag its tail, not paying attention to injuries and not allowing those the most to heal the wound. In the presence of open wounds, there is a risk of infection. In some cases, when the infection has penetrated the wound, the only solution is to amputate the tip of the tail. Enterprising owners resort to tail covers, the tip of which is fastened to a belt at the dog’s waist. In such a case, the dog should walk for about three days, during which the wound has time to heal.

Timely detection of diseases allows you to save your pet. Adult dogs should be checked at least once a year, especially before mating, for heart disease, hip dysplasia. When purchasing an Irish wolfhound puppy, you should ask the breeder for documents confirming the tests for portosystemic shunt, congenital eye diseases, hip, and elbow dysplasia.