Lagotto Romagnolo is an ancient breed of dogs from Italy, which over the centuries of its existence has changed many professions, in many respects became famous for its achievements in the search for truffles. Balanced, friendly, and energetic, they do an excellent job of being a companion and family dog. Lagotto Romagnolo in Italian means “lake dog from Romagna”, but the breed is also known as the Italian Water-Dog. 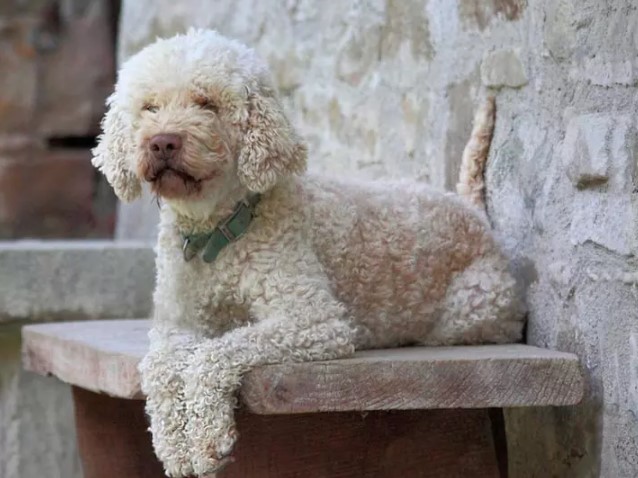 The Lagotto Romagnolo is an ancient Italian dog breed, the origin of which is very little known. The president of the Italian breed club G. Martiani is inclined to believe that Water Dogs descended from the ancient Peat Dog, which gave rise to most modern breeds. Other dog handlers consider this version unlikely.

The fact that Water Dogs were widespread in Italy already in the 17th century is evidenced by numerous paintings by Italian artists, as well as written references. In 1630, Water Dogs were described by Eugenio Raimondi. In the 18th century, curly-haired Italians were mentioned in work by the Swedish naturalist Karl Linnaeus. Both researchers write that these are friendly dogs, which mainly live in the Emilia-Romagna region, are used for hunting in the water, swim, and train well, have thick curly hair, and can dive after the game in the water with an ice crust without harm to health.

Breed club Lagotto Romagnolo was organized only in 1988. In 1991 the breed was officially recognized by the FCI.

The Lagotto Romagnolo is a medium-sized, well-proportioned, lightly boned dog that should not appear overwhelming. A thick, curly coat that evenly covers the body, should emphasize the athletic build, not obscure it. Square body. The height at the withers of males is 43-48 cm, females- 40-46 cm. Externally and in character, the Italian Lagotto has a clear resemblance to the Spanish, Portuguese Water Dog, and Barbet.

The head, viewed from above, is trapezoidal, moderately broad. The skull is broad and domed. The muzzle is rather wide, shorter than the skull, and has the shape of a blunt truncated wedge. The nasal bridge is straight, the lobe is large with open movable nostrils, the median groove is pronounced. Seen from the side, the nose may be slightly protruding in relation to the front edge of the lips. The color varies from dark brown to light brown depending on the color. The lips fit tightly to the jaws, covered with a bristly mustache. The edges are the same color as the nose. The jaws are strong, the teeth are well developed, the bite is scissor or straight. The eyes are the large, rounded, brown color of varying intensity depending on the color. The eyelids fit tightly, the eyelashes are well developed, the look is attentive, the expression is lively. The ears are of medium size, triangular in shape with rounded tips, set slightly above the brow ridges. At rest, hang down when the dog is alert and slightly raised. The hair on the ears is very wavy, should not be short; the auricle is also covered with hair on the inside.

The neck is muscular, dry, strong, oval in section, without dewlap. Slightly shorter than head length. The body is strong, compact, and the topline is straight. The withers are high, the back is straight, the loin is slightly arched. The croup is slightly sloping. The chest is well developed, rather narrow in the front, widening back. The bottom line is almost horizontal, the belly is slightly tucked up. The tail is set not very high, tapering towards the tip, reaching the hocks. The limbs are of the correct structure, vertical, parallel. Feet: Round, compact, well arched, with well-clenched toes, strong curved nails, and well-pigmented pads. Interdigital membranes are well developed.

Wool with a special texture. The awn is semi-coarse, twisted into tight curls, which are evenly distributed over the body and tail. On the head, they are not so dense, they also form sideburns, a beard, and abundant eyebrows. The undercoat is visible. The guard coat and undercoat provide the dog with water resistance. Colors: solid white, white with orange or brown spots, gray-brown, and brown in various shades with or without white, orange with or without white. Some dogs with brown color have a dark brown mask. 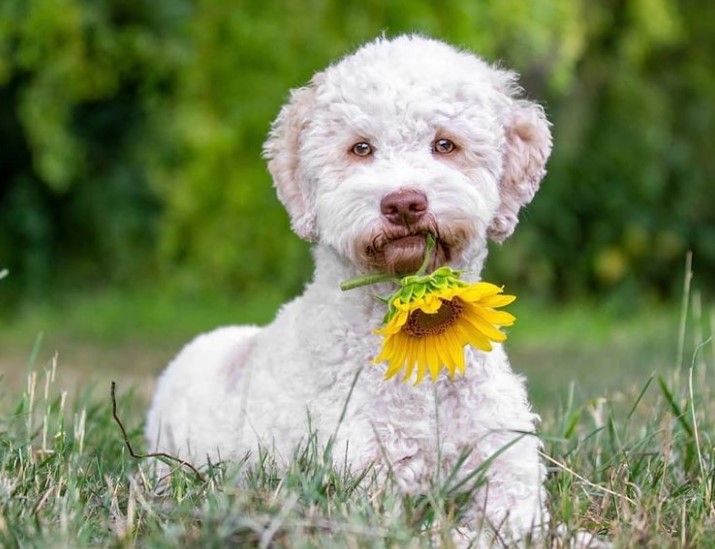 The Lagotto Romagnolo is a friendly, energetic, sociable, very hardworking, and active dog that cannot stand loneliness and boredom is ready to follow the owner anytime and everywhere and take an active part in the life of the family. In general, this is a balanced, highly human-oriented dog, lively and sociable, without signs of cowardice or aggression. At home, Italian Water Dogs are calm. Of course, they are immensely happy about the return of the owner after a long five-minute separation, but even when left alone, they do not smash furniture and do not rush headlong. On the street they are very energetic, they can play tirelessly for a very long time and get acquainted with new places and smells with great pleasure. They can easily tolerate trips and quickly adapt to new conditions. They are wary of strangers, friendly with a closer acquaintance.

Lagotto Romagnolo is strongly attached to the family, they single out one owner among all, but without special honors, everyone is loved and obeyed in about the same way. Older children will become good friends and companions in games. They get along well with any other pets, peacefully coexist with cats, and learn to calmly respond to smaller animals. 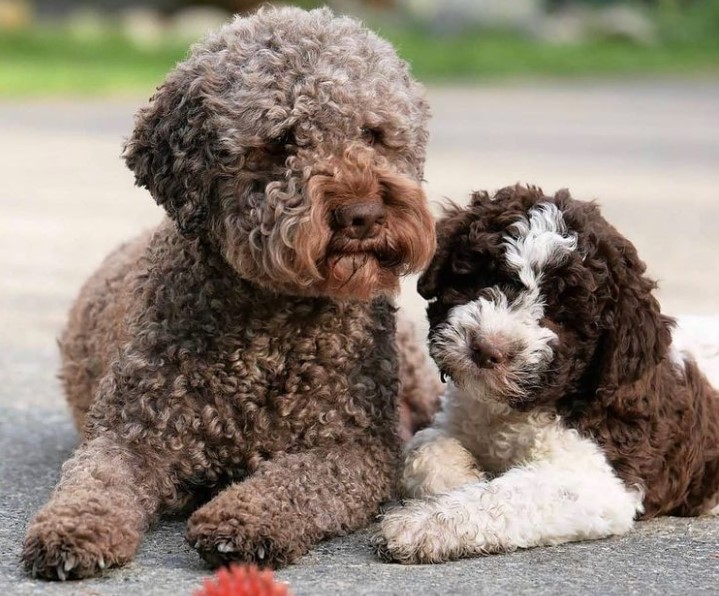 Caring for the Lagotto Romagnolo includes brushing, washing, trimming, and basic hygiene. Like other dogs, their coat sheds, but the overripe hair does not fall to the floor but remains on the dog. With regular brushing, it is removed with a comb and does not crumble at all. Combing is also necessary to avoid tangling. Bathing is indicated as needed, usually once a month. Other essential hygiene procedures include regular cleaning of your ears, teeth, and nail clipping. 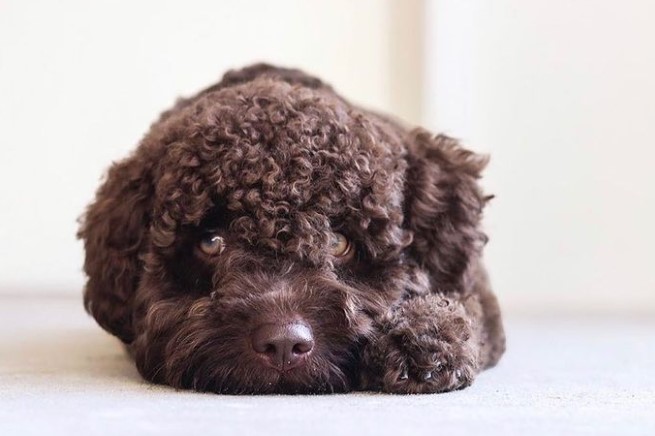 The Italian Water Dog is a robust, hardy, and genetically relatively healthy breed. The average life expectancy is 13-14 years. With good care and nutrition, any health problems are rare. Recently, in connection with a sharp increase in the number of breeders, there is a tendency for hereditary diseases to increase. Common ones include:

Occasionally, there are various tribal marriages, for example, the wrong bite, the type of wool that does not correspond to the breed, non-standard color, and others. To keep Lagotto Romagnolo healthy and active, it is important to follow standard veterinary preventive measures: treatment against external and internal parasites, vaccination.