Ukrainian Levkoy is an ideal example of the author’s breed. That is, first the idea arose, and only then it was realized – this is the creation of a cat breed that carries two dominant features: the hairlessness inherent in the Sphynxes and Peterbalds, and the folding characteristic of the Scottish Folds. 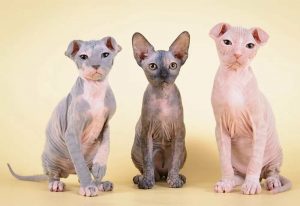 Animals with missing hair have long attracted increased attention from people. Breeding work was carried out in different parts of the world to develop new breeds of this type. At the beginning of the 21st century, similar activities were started in Ukraine. The famous breeder E. Biryukova from Kyiv made a great contribution to the formation and development of the original breed by crossing the Scottish Fold cat with the Don Sphynx. Everyone was amazed by the result of the experiment, it turned out an interesting animal with a mutant gene for hairlessness and hanging ears, which did not leave almost anyone indifferent.

Because the ears of cats had a clear resemblance to the common in Ukraine plant Levkoy, they began to be called Ukrainian Levkoy. The registration of a new breed took place in 2004. Cats began to officially participate in exhibitions in 2005 and almost immediately earned high marks from experts. It would be more accurate to say that the representatives of this breed made an unprecedented sensation. Currently, Ukrainian Levkoi is recognized by ICFA RUI and WCA. However, due to the lack of registration in the WCF system, cats cannot receive champion titles. Despite this, their popularity is growing from year to year.

Levkoy is an original type of hairless fold-eared cat with half-folded ears – “petals”, with a muscular body of a rectangular format and excessive folded skin. A characteristic feature of the Ukrainian Levkoy is the angular shape of the head with a stepped profile, large but not wide open almond-shaped eyes, and large ears, the upper part of which smoothly curves forward and down so that the auricle remains open. 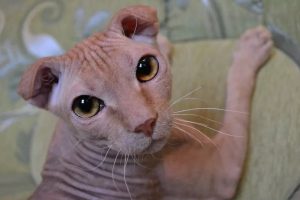 Levkoi is contact, sociable, attached to a person. Sexual dimorphism is pronounced.

The head is in the form of an elongated modified wedge of medium size. Seen from above, the head resembles a soft pentagon, slightly longer than wide. Two-thirds of the length of the head falls on the skull and one-third on the muzzle. Raised, well-defined cheekbones and eyebrows give the head an angular contour. The forehead is low and flat. The nose is of medium length, straight, not wide. Two-level stepped profile. The lines of the bridge of the nose and crown are practically parallel. The neck is of medium length, in proportion to the body, and muscular.

The muzzle is round, well marked, with a slight pinch. Vibrissae are convoluted, but absent or briefly break off. The chin is strong, well developed, neither sloping nor protruding.

The eyes are large, almond-shaped, set slightly obliquely, not wide open. Any eye color is allowed, deep and saturated color is preferable.

The ears are large enough, wide at the base, set wide and high. 1/2 – 1/3 the upper part of the ear is rounded forward and downward, the tips of the ears are soft, rounded, do not cover the auricle.

The body is medium to long, muscular, the rib cage is oval and not wide, the croup is well rounded. The backbone is strong.

Legs and feet in proportion to the body, strong. Paws are oval with long, movable toes.

The tail is long enough, even, in proportion to the body, flexible, evenly tapering. 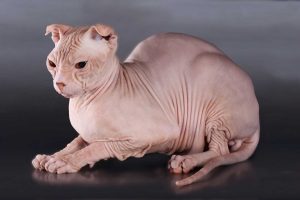 There are four main variations of the skin. Naked preference is given.

Any color is allowed, tabby colors are not separated according to the pattern. Eye color in harmony with color, preferably deep and rich color.

Faults short, round or narrow head. A hypertrophied ear reduced in size under the influence of a folded ear mutation. Ruffled outer ear rim. Ears that are asymmetrical in size, set, and/or folded. Ears that are narrow or set low. Round, small eyes. Straightened profile. Weak chin. Short body. Wide chest. Short limbs. Lightweight skeleton. Short and/or incorrectly terminated tail. Dry tail, enslavement in any part of the tail. The modified shortened shape of the caudal vertebrae. Pigmentation. Overshot up to 2 mm.

Cats with erect ears are judged in the AOV class.