Do you want your child not to sit all day on computers, iPhones, and tablets? It’s very simple – get him a pet – “cute”. Not a dog or a kitty, but a lop-eared dwarf lamb rabbit. These cute, funny, interesting animals will not let kids get bored, and they will give you great pleasure.

Naturally, cute, fluffy rabbits do not have common characteristics with lambs, however, these animals got their name “lop-eared ram” thanks to their massive, short head with a slightly wide forehead. This breed is loved by all breeders and owners who keep these funny plush rabbits at home. Overly calm, intelligent, and incredibly docile animals have conquered more than one child’s heart. The dwarf lop-eared ram is a very friendly animal, moreover, it very quickly gets used to its owner, and until the end of days remains faithful to him just like a dog. The rabbit is active most of the day, loves to play and have fun like a kitty. 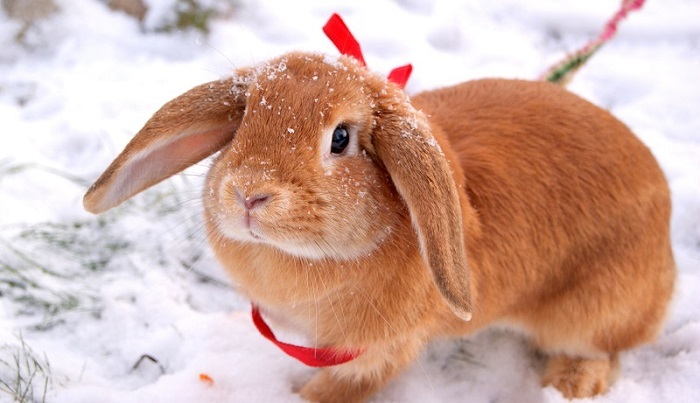 Lop-eared rabbits, the features of the muzzle, which very much resemble a ram’s head, were described in his writings by the naturalist and scientist Charles Darwin. The scientist traveled a lot all his life, and more than once met thoroughbred rabbits with falling ears. In one of his books “Changes in Domestic Animals …” Darwin just noted the lop-eared rams, whose ears are very long. Moreover, in some individuals, ears of a wide shape: caused changes in some of the bones of the skull in rabbits.

After the lop-eared French rabbits mated with dwarf breeds of rabbits, from the eighteenth century a very funny offspring of dwarf rabbits began to appear – lop-eared rams. Subsequently, homozygous lop-eared rabbits became widespread in the world, completely inheriting the features of the interesting “ram face” of their ancestors.

The very first dwarf breeds of rabbits-lambs were bred by Dutch breeders in 1950, daring to cross common rabbits “French rams” with dwarf rabbits. Two years later, the world learned about a new, interesting breed of rabbits, after which the lop-eared lambs began to rapidly conquer European countries. It is a pity that this breed became known in Russia only in 1997. Then, only in large Russian cities, nurseries of this breed of rabbits began to appear, while in many European cities and in the United States during these years, fold-eared rams were already bred with might and main.

Description of the “lop-eared ram rabbit”

The decorative breed of fluffy lop-eared rams has a very interesting constitution. The chest of miniature rabbits is wide, the body shape is cylindrical, and the neck is short. At the same time, the back of the head in animals is strong, and the forehead is convex. The back of the body is rounded, the eyes are large and serious, the cheeks are plump, the tail is small. All these external characteristics of the rabbit make it such a cute charm.

Lop-eared rams are often shown at various local and international exhibitions. However, if dwarf rabbits weigh more than two kilograms, then they are not allowed to the exhibitions. Regarding the anatomical differences between biologically identical males and females, the latter lacks dewlap and is larger than males.

The cute lop-eared rabbits have very long ears. This is perhaps their most important attraction. In adults, ears can reach twenty-five centimeters. Both ears of the animal hang down along the head and are closely pressed to it. It is interesting that the shape of the ears of this species of rabbits resembles horseshoes since the auricle is turned inward. At the tips, the drooping ears are slightly rounded, the base of the ears is thickened, resembling a royal crown in shape.

Lop-eared rabbits have a very soft coat, it is smooth, tender. In addition, the wool of lop-eared rams is different for each, and the color is interesting. The long-haired coat of rabbits is mostly fox or angora. The color of the coat is white with black, blue, sometimes it has different combinations, such as chinchilla, sable, yellow, even opal. Also bred dwarf rams with short hair, with lion heads. 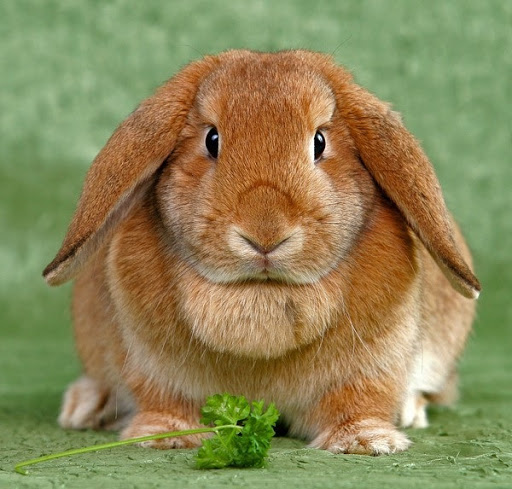 Lop-eared rabbits, like their counterparts, are real rodents, so for a long time, they will rush around the house or in a cage in the hope of chewing on something. Always make sure that no wires from equipment are scattered on the floor. Anything that can be removed from the electrics, put away at a safe distance, otherwise, your favorite plush bunny may get an electric shock.

For the construction of a house for a lop-eared rabbit ram, any spacious cage is suitable, but so that it is completely acceptable for the animal:

How to feed a lop-eared ram 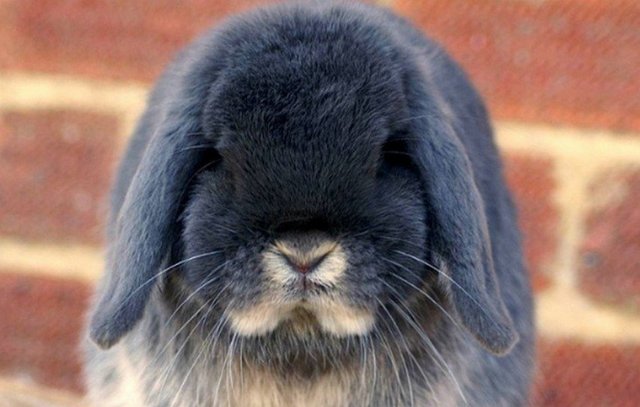 The main food for the lop-eared rabbit ram is grain and dry grass. It is not recommended to give fresh greens and grass to baby rabbits up to six months. Moreover, you can not give raw vegetables that the baby simply cannot digest properly. After 6 months, calmly introduce fresh vegetables and fruits into his daily diet, homemade herbs and fresh herbs are also acceptable. Dry grass must be kept in the cage at all times, as hay for this animal plays an important role in its healthy development.

Oats and wheat are suitable as feed for a fold-eared plush rabbit, but only in small doses. Never give babies to drink milk or eat meat in any form. It is better than the rabbits always have fresh water in the drinking bowl, not drawn from the tap, but standing for a day.

Despite their friendliness, most rabbits are proud creatures. They believe that they can cope with everything that surrounds them, therefore they do not like being picked up or taught. Do this: open the cage, release the rabbit and follow him. If the rabbit does not want to leave his shelter, then he is very scared, so the cage for him now acts as a guardian house.

Want to see how a caged rabbit is doing? Walk up to him carefully. If the animal wants, it will go out and come closer to you. In order for the rabbit to trust you, always approach him with some tasty treats. If the rabbit is very angry, intends to bite you, do not beat him, but lightly press his head to the floor: this way he will understand that you are the master of the house where he lives. By their nature, rabbits do not tolerate rivalry, so they easily jump onto their “guest” on the back, thereby indicating that he is the master here.

The rabbit needs special care. He should cut his nails as needed. To make it easier to care for the pet’s nails, buy special tweezers that will prevent you from accidentally touching the vessel on the animal’s paws.

Monitor your rabbit’s behavior. If he plays, jumps is active a lot, then everything is fine with him. However, if the animal does not want to eat anything for a long time, sits in a cage, and sleeps constantly, and its coat has become dull, then your pet is sick.

How to buy a good lop-eared rabbit