The Manchester Terrier was bred in Manchester, England to kill rats. He is energetic, very reckless, and agile, with a pronounced hunting instinct. It is very hardy and does not require complex maintenance. For active people, this dog will become a faithful companion and friend, a companion in various sports, for older children, a tireless partner in games. Today, the breed is rare even in its homeland. 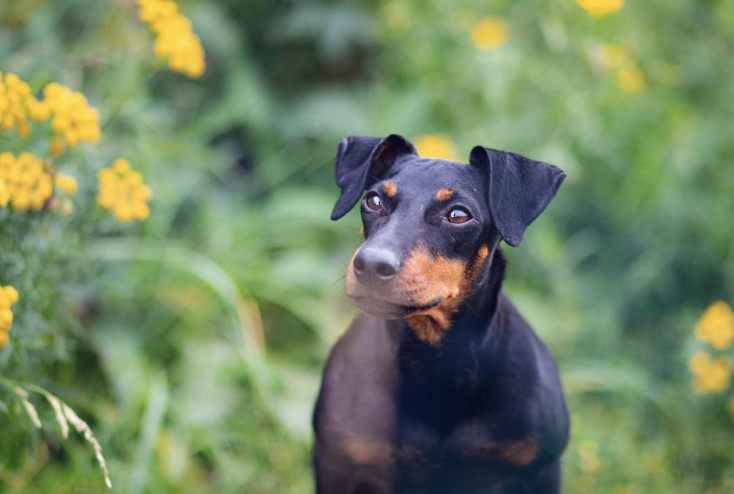 Unlike most other terriers that come from farms, Manchester was formed in an urban setting. It is not intended for burrowing work, but one of the best in rodent extermination, and can also hunt a wild rabbit, which is not used in the modern world but allows you to participate with a dog in coursing competitions.

The Manchester Terrier is a direct descendant of the now-extinct English Black and Tan Terrier, which was highly regarded for its working qualities. In industrial areas in the north of England, he was called the “Rat Terrier”. In the early 19th century, the extermination of rats with the help of dogs in Great Britain became not only a necessity but also a popular sport. John Hulme, enthusiastic to get the best out of this, crossed an Old English Terrier and a Whippet. The result was a tenacious and fast dog, which was more suitable than others for persecuting rodents. The fighting spirit of the mestizo Terrier and the Hound was so strong that the dogs not only strangled the enemy but also tore him in two. By 1860, the Manchester Terrier had become one of the most famous and popular rat-baiting breeds. To reduce it and improve the exterior, breeders began to experiment, to infuse the blood of other breeds, in particular the Chihuahua. this reduced height and weight, but led to numerous health problems such as thinning hair, eye diseases, and others.

As in England, the United States quickly appreciated the working qualities of the Manchester Terrier, and already in 1886, 2 years after the organization of the American Kennel Club, the breed was officially recognized. in 1923 the American Manchester Terrier Club was founded. A miniature variety is introduced in 1934. In 1938, the small Manchester Terriers were separated into a separate breed – the Toy Manchester Terrier. By 1952, the standard variety had become so small in number that the breeds were again combined into one, but two growth variations were identified in it. In 1958, the clubs merged as well, which was the last step in the unification of standards.

The advent of other pest control methods hit the breed. Only the work of dedicated British breeders, members of the Manchester Terrier club, as well as the positioning of the service dog as a participant in the exhibition and a companion, made it possible by the end of the twentieth century to somewhat improve the situation. 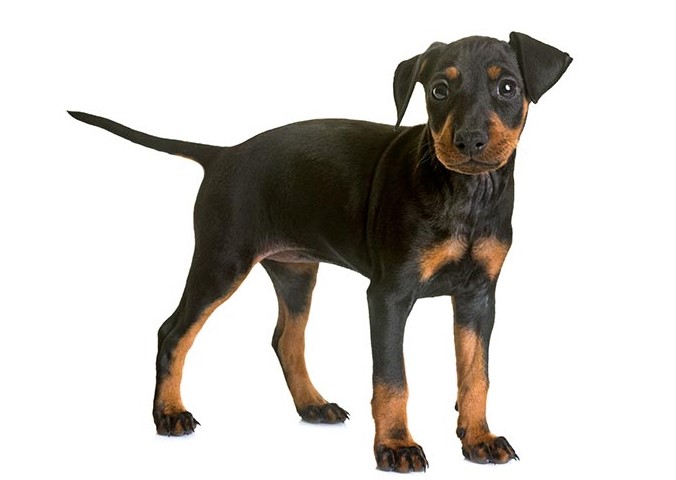 The skull is long, narrow and flat, wedge-shaped. The muzzle is elongated, noticeably tapering towards the nose, well filled under the eyes. The nose is black. The jaws are the same size. Strong teeth converge in a regular scissor bite. The lips fit tightly. The eyes are small, dark in color, shiny, almond-shaped. The ears are triangular, of medium size, set high, drooping, close to the head above the eyes.

The neck is long enough. The top line in the lumbar region is slightly arched. Ribs well sprung. The tail is short, thick at the base, tapering well to the tip, carried not above the level of the back. The forelegs are straight and placed under the body. The hind legs, viewed from behind, are straight, from the side, well arched at the knees. Feet are small, strong with well-arched toes, oval.

The coat is smooth, thick, very short, and shiny. Color: very rich black with a bright mahogany tan. The tan is distributed as follows: on the cheekbones, above the eyes, on the lower jaw and throat, clear triangles on the legs from the wrist and hock joints downward, not reaching the toes, which are shaded in black; there is a small black spot above the paws, which is called the “thumbprint”; there are also tan marks on the inside of the hind legs, on the knee joint; under the tail in the anus should be as narrow as possible and covered by the tail. Marks on the outside of the hind legs are undesirable. Colors should be clearly separated.

A miniature variety of the Manchester Terrier is recognized only by the American Kennel Club, which means that small dogs are officially bred only in the States and Canada. In Great Britain, where the English Kenne Club is considered the main association, and in 84 other countries under the patronage of the International Cynological Federation (FCI), Miniature Manchester dogs have long been singled out as a separate breed – the English Toy Terrier. It is worth noting that the English Toy Terrier is endangered. To increase the population and expand the gene pool, the Kennel Club of Great Britain allowed the registration of American Toy Manchester and Manchester Terriers of the appropriate size under the name English Toy Terrier. 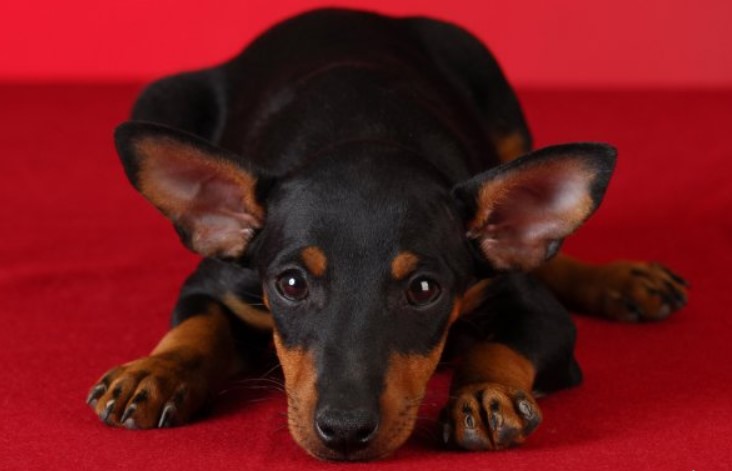 The Manchester Terrier is energetic, domineering, intelligent, wayward, and impulsive. In his work, he is fearless and persistent, has a pronounced instinct of persecution and anger towards a small animal. Any small animals and, to a lesser extent, birds can be potential prey.

The Manchester Terrier is independent, if you indulge him too much, you can get a little four-legged Napoleon, who is convinced that he rules the world.

Manchester is strongly attached to the owner and family members but remains independent. Needs early socialization and competent upbringing, as well as good physical and mental stress, which will prevent the development of negative qualities. Likes to be in the spotlight and always becomes an active participant in any events. Manchester Terriers do not like prolonged loneliness and suffer during separation from the owner. For this reason, the breed is not suitable for those who are busy all day at work, and in their free time are not going to pay enough attention to the dog.

The Manchester Terrier is very active and alert and therefore copes with the duties of a watchman. He usually avoids close contact with strangers, is alert, but not aggressive. He plays or keeps aloof with other dogs, rarely provokes conflicts, but will not go aside if challenged. This dog gets along well with other dogs and cats grew up with. As for small animals and birds, they will forever remain the subject of hunting for the Terrier. 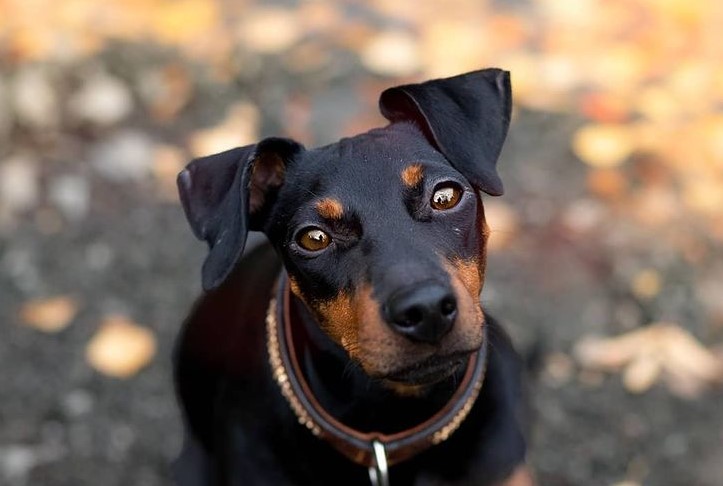 The Manchester Terrier is absolutely unpretentious in terms of care. Its coat consists only of a short topcoat, which means that with regular combing and bathing, molting is very weak, including seasonal. It is recommended to brush the dog weekly with a special brush or mitten for short-haired breeds. After the procedure, the remaining hair is removed with a damp cloth or palm. As a rule, full bathing is rarely required, once every 2-3 months.

For the rest, the dog needs the usual hygiene procedures: cleaning the ears and teeth, trimming the nails. By the way, Manchester Terriers have strong teeth that are not prone to periodontal disease, therefore, for preventive purposes, toys from the dental series and dried beef veins in the form of a delicacy are often enough. 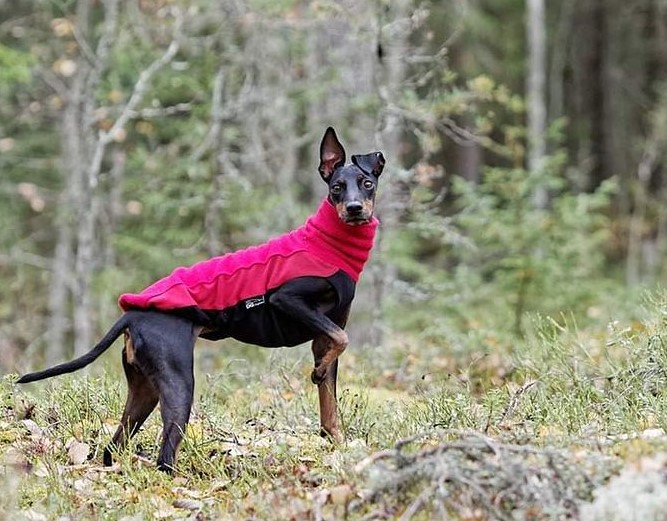 In general, the Manchester Terrier is in good health, is hardy in nature, and adapts easily to different living conditions. However, it can inherit some diseases that are more or less common in different lines:

To preserve the health of the dog, one should not forget about the mandatory veterinary preventive measures: routine vaccination, regular treatment against parasites, annual medical examination for common genetic and other health problems. Life expectancy can reach 15 years or more.