When you see a Miniature Pinscher for the first time, you might think you are looking at a Mini Doberman. But far from it! Miniature Pinschers are an independent breed recognized by the FCI (Fédération Cynologique Internationale) that has nothing to do with the Doberman. Instead, there is a relationship with the German Pinscher. The breed standards expressly point to a reduced image of the German Pinscher, without any defects of a dwarfish appearance appearing.

An Overview of Mini Pinschers

Miniature Pinscher, also known as the Rehpinscher, is a self-confident, very lively four-legged friend with an elegant and athletic appearance. He has a lot of energy, and he loves to indulge in hunting and playing. 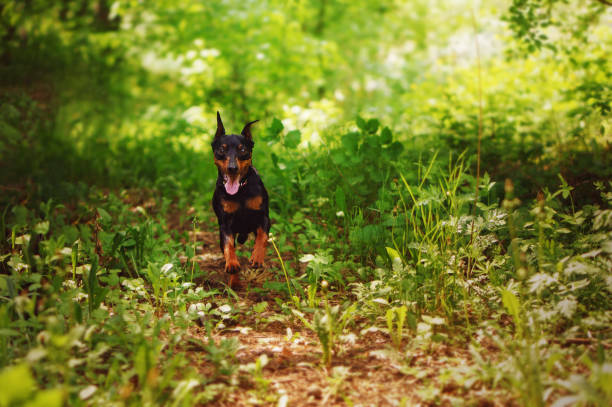 Miniature Pinschers are docile and relatively easy to train if they are not allowed to assert their stubbornness (absolutely counteract). He develops a particularly close bond with one member of his family while remaining loyal and friendly to the rest of the pack. Children should treat him with due respect. Despite its small size, the miniature pinscher is a real dog with its own needs and not a cuddly toy that you can romp around with unrestrictedly.

If strangers approach its pack or its territory, they are first barked at and inspected from a safe distance. This trait makes the Miniature Pinscher an excellent watchdog, but one that does not exhibit aggressive behavior. His strong hunting instinct makes it necessary to keep the little fellow on a leash in forest and field. When left free, he chases after any mouse or rat.

Miniature Pinschers have a great urge to move, which needs to be satisfied every day. Long walks, intelligent games, and dog sports such as agility or dog dancing provide mental and physical exercise. Underemployed, this breed tends to get nervous. If consistent training is lacking, it can quickly develop into an annoying barker. However, enough activity makes a balanced and loyal companion out of the Miniature Pinscher. Despite his strong temperament, he gets along well in city apartments due to his small size, provided he gets enough exercise. A sporty owner is therefore always an asset for the lively Miniature Pinscher.

The Breed Standards for the Miniature Pinscher

His body should be as square as possible in the overall picture. The head is stretched and strong, the nose is black, and the scissor bite is also strong and bright white. His eyes are oval in shape and dark in color. The V-shaped ears are set high and are carried forward with a fold or pricked.

The gracefully curved neck of the Miniature Pinscher runs smoothly into the strong and short back. Its slightly rounded croup blends harmoniously into the tail. The moderately broad chest shows a prominent breastbone point.

The legs of the Miniature Pinscher have strong muscles and make the little dog appear stocky. With a calm back he trots extensively, his movements are harmonious, fluid, and safe.

Its coat is short, close-fitting, and has a striking sheen. The color variants are deer red, a light red-brown, and a dark red-brown. The bicolor has a jet black coat with brown or red markings above the eyes, under the neck, forelegs, and paws, and on the insides of the hind legs and under the base of the tail. Two regular, cleanly delimited triangles stand out on the chest.

The Nature and Character of the Miniature Pinscher

The miniature pinscher is known for its strong character and a good deal of temperament. He is confident and curious but never aggressive. He reliably guards house and yard but also cuts a fine figure in dog sports such as agility or dog dancing. With these sports, he can live out his tireless urge to move appropriately. The Miniature Pinscher is an ideal companion for people who like to do sports, like go for walks, or ride a bike.

With enough exercise and enough brainwork, the Miniature Pinscher becomes an affectionate and uncomplicated companion for his family. Whereby he usually only develops a particularly intimate relationship with one “pack member”. He treats all other members of the family as open-minded and friendly. He adapts easily to his family’s lifestyle and gets along well in small apartments in the city if he is given plenty of exercises. 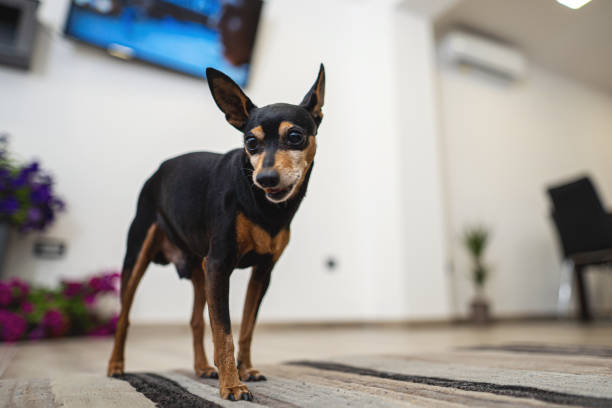 However, one should stick to the chosen line and not tolerate the misbehavior of the dog out of laziness. Miniature Pinschers are very attentive in this respect and notice exactly when their master or mistress is careless. Inadequate upbringing will result in the Miniature Pinscher asserting its innate stubbornness and tending towards dominant behavior.