Yorkshire Terriers have a well-proportioned body and an upright posture. In character, he is relatively balanced and tends to overestimate himself when in contact with larger dogs.

Its head is small and flat, the nose is black and the mouth is not too long. The Yorkie has a regular scissor bite, the teeth set square in the jaw. The medium-sized, dark, and glossy eyes do not protrude and give the small face a distinctive, intelligent expression. Small, V-shaped ears are carried erect and covered with short hair.

The back is straight, and the chest and loins are well muscled. Yorkie carries his very hairy tail straight, just above the line of his back. 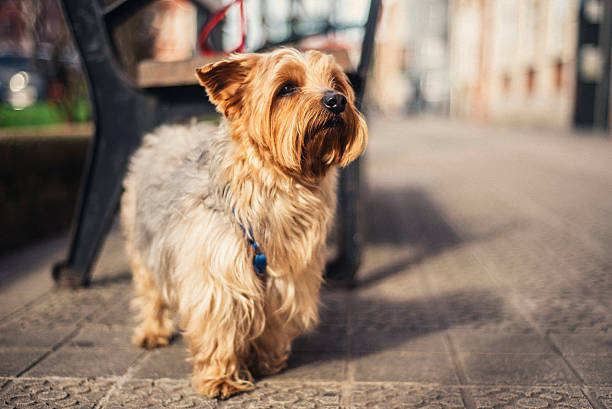 A characteristic of the Yorkie is its long and fine, shiny coat. It has no curls or waves. The base color is a steel blue with lighter shades of tan.

The Essence and The Character

The intelligent and confident Yorkshire Terrier is first and foremost a cute family pet. However, one must never forget that he is a real terrier who can get quite short-tempered from time to time.

Normally he is a loyal companion who loves his people more than anything and is happy about a lot of attention and cuddles. However, he knows exactly what he wants and tries to achieve it under all circumstances. This is where good and consistent upbringing has to stop, which should start as early as the puppy age. Since the Yorkie likes to learn, he can be taught the basic commands in a playful way. If you accept him as a dog and not as a lap dog, he becomes an active companion with strong nerves. You also have to take care of his well-trained hunting instinct very early on if you don’t want the little one to hunt and possibly catch everything smaller than him at every opportunity.

A special characteristic of the small terrier can sometimes actually lead to fights with other dogs. The Yorkie sees himself as big and strong, a clear case of overconfidence. No matter the size of the other dog, the Yorkie will not be intimidated, remaining headstrong and sometimes short-tempered. It is therefore very important to socialize him with other dogs, who are as long-suffering as possible, from a young age, so that he will behave appropriately towards other dogs in adulthood.

When dealing with children, care must be taken to ensure that they do not misuse the little terrier as a toy and injure it through carelessness. It is therefore not necessarily the right playmate for small children, as it can also snap if it gets too rough. Larger children with a greater sense of responsibility, on the other hand, have an active playmate in the Yorkie.

The Yorkshire Terrier is one of those dogs that do not shed their hair in spring and fall. However, long hair requires regular care. Due to its length, leaves, small sticks, and other things often get caught in the fur. Therefore, daily brushing is required to prevent tangles and pilling. You should avoid full baths, except in the case of heavy soiling, since even dog shampoos impair the Yorkie’s skin functions and possibly cause allergies. If the hair is too long, it can be cut at the dog groomer or you can do it yourself.

When brushing and combing, the Yorkie can also be checked for skin imperfections, lumps, or parasites. The earlier abnormalities are treated, the better the chances of recovery. The Yorkshire Terrier’s paws also need to be cared for, especially in winter. Dog paws are heavily strained by ice and snow and above all by road salt. If some care grease is applied regularly, the paws remain supple and do not crack.

Although the Yorkshire Terrier is a robust and agile dog, it is not immune to some diseases that are typical for it. Even a responsible breeder who relies on genetically healthy parents cannot guarantee that no disease typical of the breed will occur.

The Story of the Yorkshire Terrier

Originally from the county of Yorkshire in northern England, the Yorkshire Terrier was first seen around the 1850s. In 1861 he was first seen at a dog show. Slightly larger than the form we know today, it served as a guardian of house and yard and hunted mice, rats and rabbits, so it was more likely to be found in the working-class milieu. 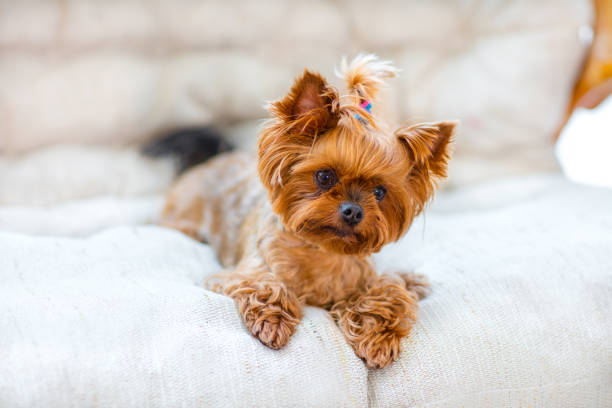 But the nobility soon became interested in the lively and courageous terrier. The first breed standards existed as early as 1898. Various other small dog breeds were crossed over the course of further breeding, such as e.g. B. the Dandie Dinmont Terrier, the Skye Terrier, the Maltese, and the Manchester Terrier. In the following decades, the Yorkie, as he was affectionately known, was bred smaller and smaller. The small, cute little fellows were very popular as lap dogs with the ladies from good families. However, the hair bow, which has now become almost a trademark of the Yorkshire Terrier, was not given to the noble ladies. When hunting, the terrier’s long hair was tied back with a bow so that his face was free.

In Germany, people only became aware of the Yorkie at the beginning of the 20th century. However, it only became really well-known and popular in the 1970s.