Modern man often lacks communication with wildlife. And one of the ways to compensate for this is with pets. Many different cats and dogs inhabit our homes, fish – from those that have already become common to those just brought from a distant homeland. And, of course, the increasingly popular exotic species: spiders, turtles, snails, various mammals, iguanas, chameleons, and monitor lizards. 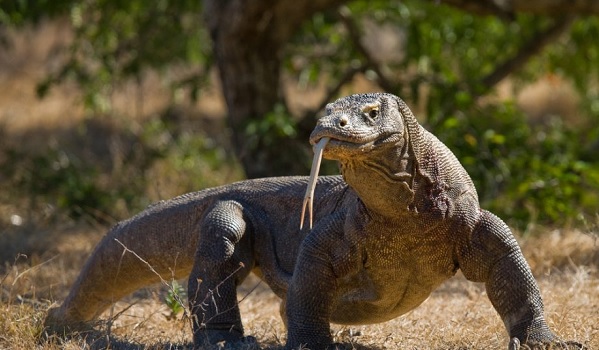 Interest in monitor lizards is fully justified. These are mostly large lizards. The largest of them – Komodo lizards – reach 3m long and about 70 kg of weight. These are real dragons, but very rare and few in number. Among the vast relatives of monitor lizards, there are also small animals – short-tailed monitor lizards, about 30 cm long.

One of the common species of monitor lizards is the Nile monitor lizard. It is the largest lizard in Africa and is found almost everywhere. And it is these large, up to 1.5 meters in total length, strong, strong, and, moreover, quite bright animals that have long been an object of fishing and are sold to amateurs as pets.

Nevertheless, accidents involving monitor lizards are not uncommon. A terrible story happened in the city of New Arc, Delaware, USA. Ronald Huff, 42, did not appear at work or with relatives for several days. A police squad was sent to his home, which found the corpse in the company of 7 monitor lizards. The cause of the death of the owner of the animals could not be reliably established, but it is believed that the monitor lizards were quite capable of attacking humans. In nature, they feed on beetles, spiders, termites, caterpillars and other large insects, slugs, frogs, toads, snakes, lizards, young crocodiles, fish, small mammals (including domestic cats), birds and their eggs, turtles, etc.