“Doggie, doggie, why do you have such big ears?” – I just want to ask this cheerful monsieur, originally from the French historical regions of Artois and Normandy. But long cute ears are far from the main advantage of this breed. Due to its excellent hunting qualities, noble appearance, and almost ideal canine character, the Basset Artesian Norman has a huge number of fans and has long been considered the most popular breed among Basset hounds, not only in its homeland but also in the USA and Great Britain. This Frenchman was also in demand among the masters of the brush: he can often be seen on the canvases of famous world artists. 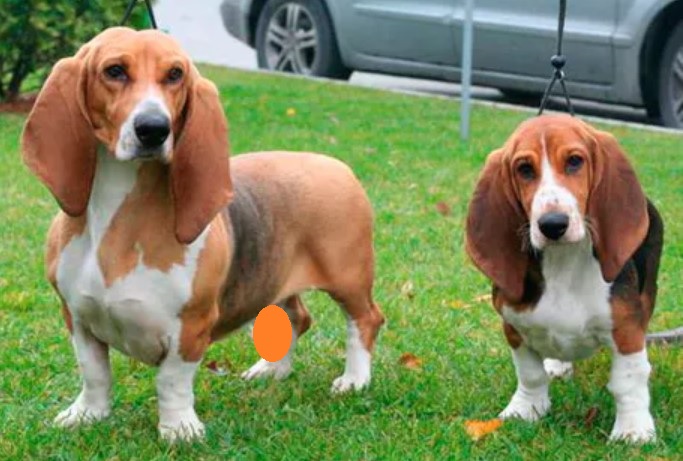 The ancestors of the Basset Artesian Norman are the Basset Norman and Artois Basset, which today are considered extinct breeds. Since its inception (around the 16th century), the breed was bred exclusively for hunting (mainly fox, roe, and hare), but from the end of the 19th century, fans of canine beauty began to breed the second type of Basset specifically for participation in exhibitions. For hunting bassets, unlike show dogs, straight limbs are required, which allow him to hunt in the most difficult natural conditions and develop high speed in pursuit of prey. By the way, sometimes this brave and agile dog will give odds to large hunting dogs because he knows how to sneak into places inaccessible to them and drive out the game from there. In addition, he works exclusively with the lower sense, which is considered a rarity among hounds. His hunting qualities allow him to work with equal success both in a pack and in splendid isolation. This squat doggie of the strong constitution has a very interesting and attractive appearance. He has short, straight, muscular legs, a long saber-shaped tail, a rather large head with an elongated muzzle, long, thin, low-set, hanging and pointed at the ends (how many epithets!) Ears. Keep in mind that these wonderful ears should be regularly cleaned and wiped with a damp cloth. This Basset breed has large dark eyes, whose gaze is always serious and thoughtful, so it often seems that the dog is sad. The smooth and dense coat of this hunter has protective functions, and as care for it, weekly brushing and regular (but not frequent) washing will be enough. Basset Artesian Norman is most often white or reddish-white with a black or badger cap. The height at the withers in these dogs is 26-36 cm, and the weight should not exceed 15 kg. This cute dog is an obedient family man and also an excellent nanny, so you can safely entrust your child to him – they will quickly and easily find a common language. Basset Artesian Normandy is friendly and non-aggressive with congeners, as it has long been accustomed to working in a pack. He will happily communicate with his four-legged flatmates if they are as well-bred as he is. With its soft character, this doggie is still characterized by independence and a proud disposition, so that sometimes he can kick up, but he always departs quite quickly. It is suitable for keeping in a city apartment, but be prepared to provide your active and mobile pet with enough space to play.