Goldfish have been kept as pets for thousands of years. During this time, the breeders have obtained more than 300 varieties of this beautiful fish, each of which differs in body shape and color. Oranda is a breed of goldfish, which is characterized by the presence of masses of warty outgrowths on the head, and sometimes on the gill covers.

Oranda Goldfish is a short-bodied goldfish. It was bred by Chinese breeders and is a species of veiltail. 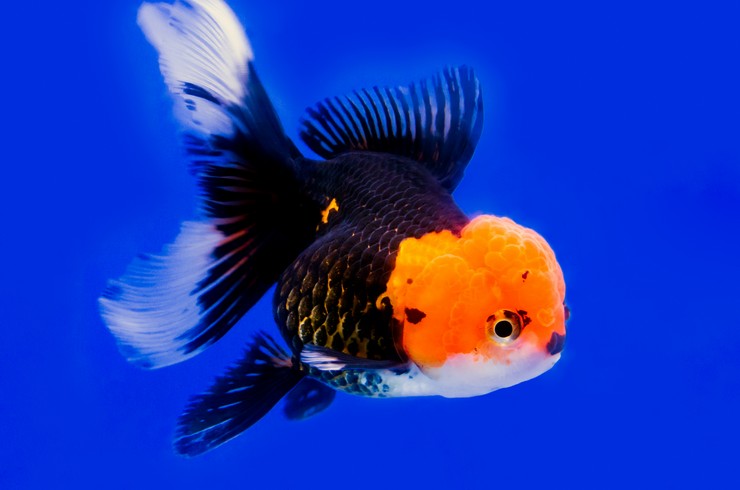 This popular fish has several variations depending on the degree of development of fatty deposits and their location. The breed is very popular and has its own standards. In the East, oranda is very much appreciated, they are called nothing else than “Water Flowers”. On its basis, a large number of interesting hybrids have been created, including crossing with other breeds of goldfish.

A typical oranda is very similar in appearance to a veil tail. The body is shortened, ovoid. The caudal fin is bifurcated with rounded lobes. The dorsal fin is medium. A distinctive feature of the oranda is the presence of characteristic fatty growths on the head and gill covers. They can be present in the form of small outgrowths on the sides of the head (“pompom”), or they can completely cover it, even closing the eyes (lion-headed oranda). 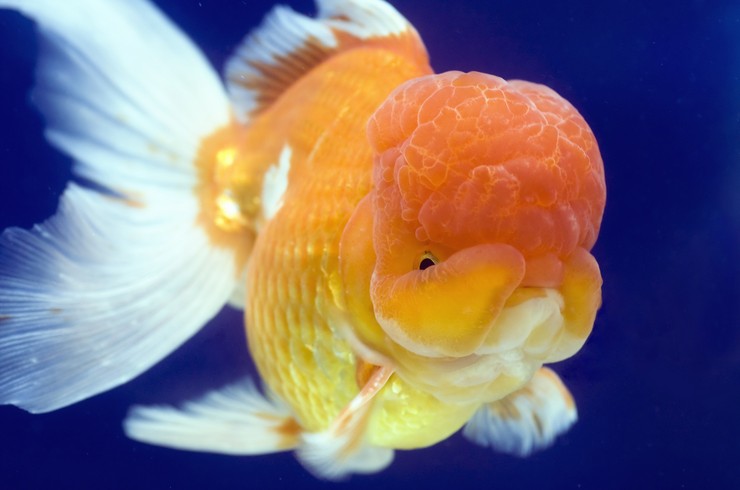 The color has a wide range of variations: red, black, blue, and their various combinations. The red riding hood variation stands apart – its body is absolutely white, the bump on its head is bright red. 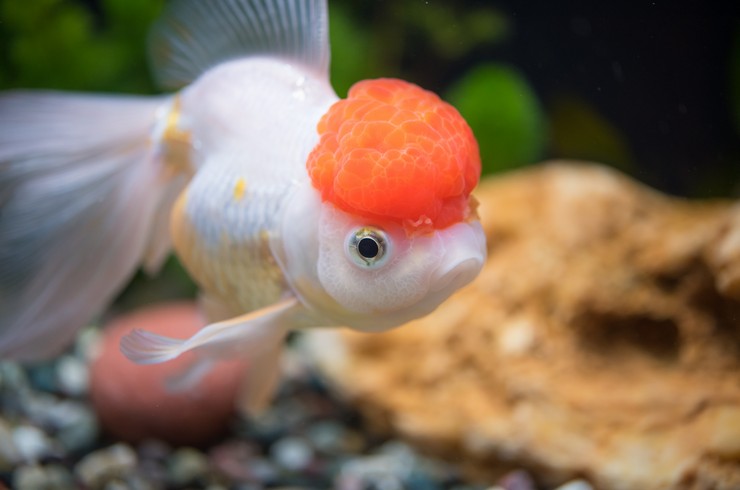 The exact date of the appearance of the oranda goldfish is impossible to establish. Like many other breeds, the breeding of this fish in China has a long history and continues to this day. It is reliably known that the ancestor of the oranda is the veiltail, in turn, derived from the riukin breed. The selection was based on several criteria – shortening of the body, development of growths on the head, in some cases, in size and color.

To keep one oranda, you need a spacious aquarium with a volume of at least 50 liters, but since it is best to keep fish in small flocks of 5-6 individuals, it is better to pay attention to aquariums from 200 liters. Oranda is a large and mobile fish. For a comfortable existence, they need to organize effective filtration and round-the-clock aeration of the aquarium. Goldfish are considered “dirty” in the world of aquaristics because they are very voracious. With their content, one should not neglect regular measurements of the content of nitrogen metabolism products using tests. It is desirable to achieve a minimum amount of suspension in the aquarium, it is capable of settling in the folds of fat build-ups and can cause infection.

It is recommended to use rounded pebbles as soil because oranda is not at all averse to digging in the soil. You should not use decorations with sharp edges, as fish can damage their long fins and “hat” about them.

Like other goldfish, oranda prefers cool water. It is desirable that the temperature in the aquarium does not exceed 24 ° C. In summer, overheating of the fish should be avoided, this can quickly lead to their death. The fish do not have special requirements for the hardness of the water: they can survive both in soft water and in rather hard water (5-20 dGH). An acidity of around 7.0 would be optimal. It is imperative that weekly water changes are required to prevent the poisoning of fish with nitrogen metabolism products.

The love of eating green plants was inherited by the oranda from the progenitor – the goldfish, a significant part of the diet of which consists of plant foods. If you add to this the habit of digging up the soil, it becomes clear that keeping live plants in oranda aquariums is very problematic. It is best to pay attention to hard-leaved and fast-growing species: Anubias, Cryptocoryne, Elodea, egg capsule, Vallisneria. It will not be superfluous to have a Riccia in the aquarium, it will be an excellent addition to the main diet of a goldfish. 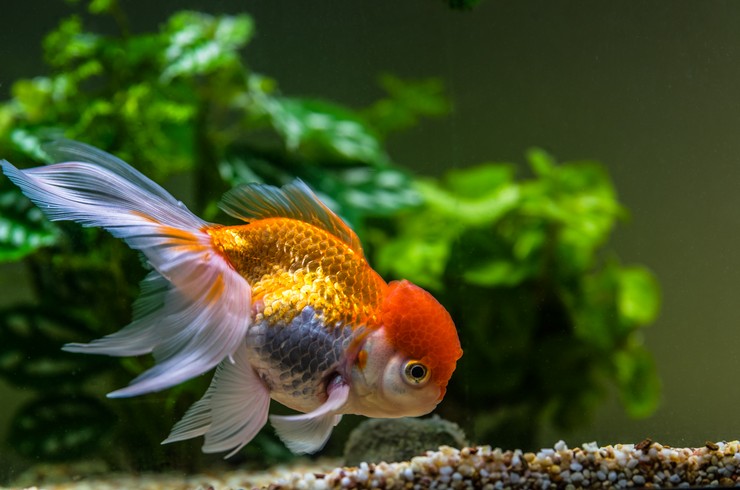 An ideal choice for keeping an orange would be a species aquarium. They also go well with short-bodied goldfish breeds.

Oranda is rather slow, swimming imposingly throughout the entire water column in the aquarium. Therefore, it is better not to plant active neighbors (iris, barbs). You can not place together with oranda and small fish that are placed in their mouth, sooner or later such fish can be eaten. Do not forget that oranda is cold-water fish, so many tropical species in cohabitation will be inappropriate. They get along well with most types of catfish, which will become excellent aquarium cleaners.

Feeding the oranda is no different from that of other goldfish. Oranda is omnivorous, its diet should contain both animal and plant components. In food, these goldfish are unpretentious, they gladly eat both dry and live (frozen) food. They love to pinch the tender parts of green plants.

It is very important that the dry food used to feed the oranda is balanced in essential nutrients and is well absorbed. The latter is most important since undigested elements in the form of waste will enter the water and can cause contamination of the aquarium. 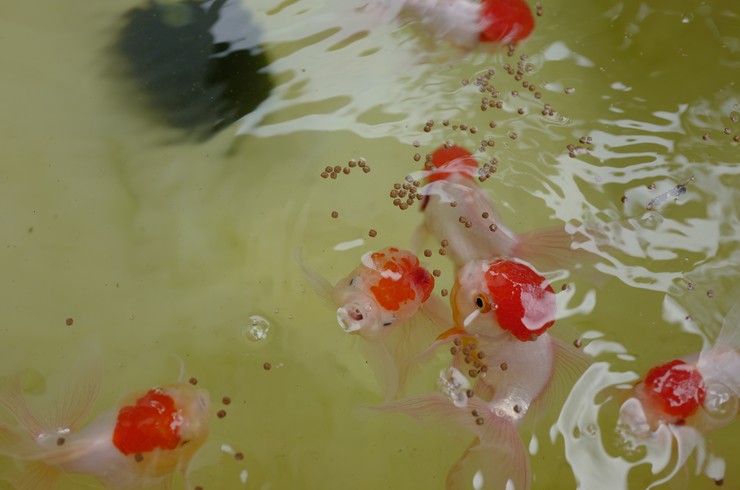 In the assortment of the Tetra company, you can easily choose a complete ratio for the oranda. An excellent choice would be Tetra Goldfish Gold Japan premium dry food pellets. It is perfect for all breeding goldfish. Mini granules quickly soften in water and gradually sink to the bottom, which corresponds to the habit of oranda looking for food at the bottom. There are a lot of plant proteins in the feed, which provides comfortable digestion.

Also, the Tetra Goldfish specialty line for goldfish can be used as the main food. You can choose the most common form for feeding the orange: flakes, chips, granules, or sticks. It is worth noting that all foods contain the Clean & Clear Water formula. This means that the food is absorbed as much as possible and the amount of fish waste is reduced, which allows the water in the aquarium to remain clean and clear for longer.

Regular feeding of TetraPro Algae with a high content of spirulina will not be superfluous.

It is necessary to feed the orand several times a day in small portions, which will be eaten by the fish in a few minutes. It is recommended to arrange a fasting day once a week.