Nature has given us a huge variety of fish species that can be kept in an aquarium. But the inquisitive human mind cannot be stopped, so artificial species, created by human hands and never found in nature, began to appear in ornamental fish farming. The red hybrid parrot is an excellent example of the creation of human hands.

Parrotfish (Red Parrot Cichlid) was first obtained by Taiwanese breeders in the early 90s. Information about which species became the basis for obtaining a hybrid is still a trade secret. Only one thing is clear – these were different types of South American cyclases. The most likely candidates for the role of “progenitors” of red parrots:

For this reason, the fish is often called the three-hybrid parrot.

For several decades, a large number of all kinds of crosses have been produced, and now you can find various hybrids on sale under the general commercial name “Red Parrot”.

In society, there are still heated debates about how ethical it is to create such species. Indeed, in the process of hybridization in fish, a significant displacement of body parts and internal organs occurs, a change in the shape of the mouth leads to the fact that the fish can only eat certain types of food. And if we recall the fact that many representatives of red parrots are artificially painted, tattooed, tails cut, etc., then the question of whether it is worth interfering with natural processes remains open. However, it should be noted that three-hybrid parrots attract attention with their unusual shape, bright color, and interesting behavior, which have earned the love of many aquarists.

In appearance, a parrotfish is very similar to a barrel. The body is short and rounded. The fish got their commercial name “parrot” because of the unusual head shape and bright body color. The mouth is small, almost triangular in shape, designed so that the lips do not completely close, and often from the side, it looks like a wide smile. The mouth can only open vertically at a small angle. 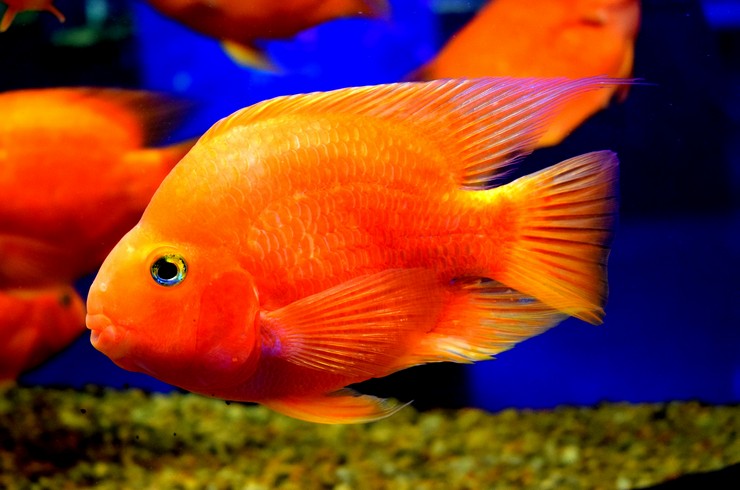 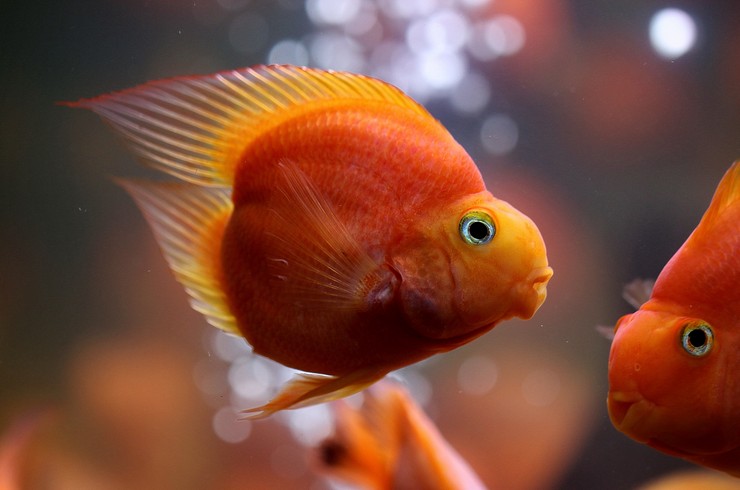 The spine is curved, the iris of the eyes is large. The unusual shape of the body and anatomical changes in the internal organs (including the swim bladder) led to the fact that the fish swim somewhat awkwardly, although sometimes they can be very impetuous.

The color is very varied. Natural colors for parrot fish are red, yellow, white (a very rare species). This color is the most stable and practically does not change over time. All other colors – purple, green, blue – are obtained artificially, this color does not last long. Parrot fish with “tattoos” are often on sale. Sometimes you can see the “wild” color, reminiscent of cichlaz and cancer. 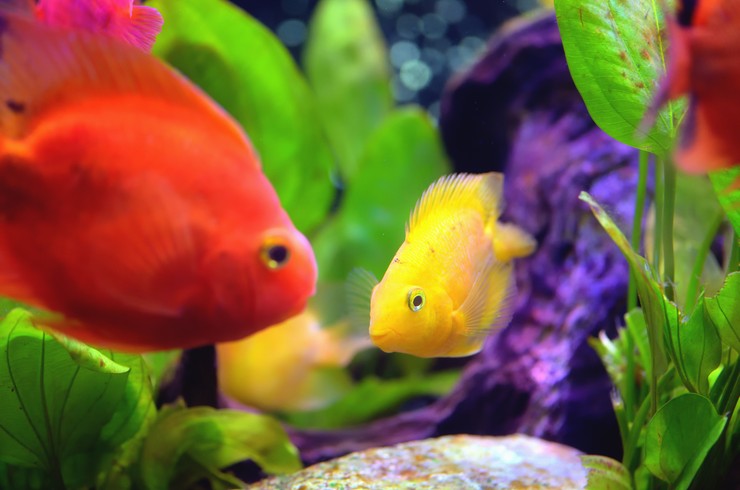 In addition, a large number of red parrot hybrids have been obtained with other cichlid species, as well as with another well-known fish, the Flower Horn.

Sexual dimorphism is not expressed. It is almost impossible to distinguish a male from a female. Only during spawning can the sex be determined by the presence of the vas deferens or ovipositor.

The parrot fish is a completely artificial species that does not occur in nature. Serious anatomical and morphological changes caused by interspecific hybridization do not allow such hybrids to survive in the natural environment and win in the struggle for existence with natural species, but in an aquarium, fish can live quite a long life. Many aquarists oppose the creation of such hybrids and seek to ban the breeding of parrot fish. I would like to note that there are quite good reasons for this. A large percentage of fish marketed are artificially colored. This process is far from being as humane as it might seem at first glance. There are two main ways:

It must be equipped with a cover, as there are known cases of jumping out. The fish are very large and generate a lot of waste, so careful attention must be paid to good filtration. The best choice is an external filter of suitable power. Also, the water needs to be aerated.

The fish look as contrasting as possible on a black background. It is best to choose sand or large rounded pebbles as a soil. Parrot fish are very fond of digging up the ground and building nests, sometimes radically changing the relief of the aquarium. It is better to keep the fish in small flocks of 3-5 individuals. Unfortunately, sex differences in parrot fish are very weak, and therefore a situation is possible when there will be many males in the aquarium or a dominant pair is formed that chases its relatives. In this case, shelters will come in handy, you can also place driftwood in the aquarium.