Somewhere in this world, where there is always frost … No, not only polar bears live in such conditions. At the opposite end of our balloon live birds, not flying, but very interesting.

Penguins appeared on the planet long ago, 60 million years ago. And if now there are 18 species, then about 40 have already become extinct. Moreover, their dimensions were impressive. So in Peru, in the Paracas National Reserve, paleontologists discovered the remains of a large penguin. This penguin lived 36 million years ago, a feature of this find was that it was possible to extract microscopic remains of feathers and scales, which were used to restore the appearance and even color of the bird’s plumage. Characteristically, the appearance of the penguins during this time has practically not changed, except for the color. At the time, they were brown and gray, with no clear black and white decoration. They were also striking in size – about 1.5 m tall and weighing 120 kg. 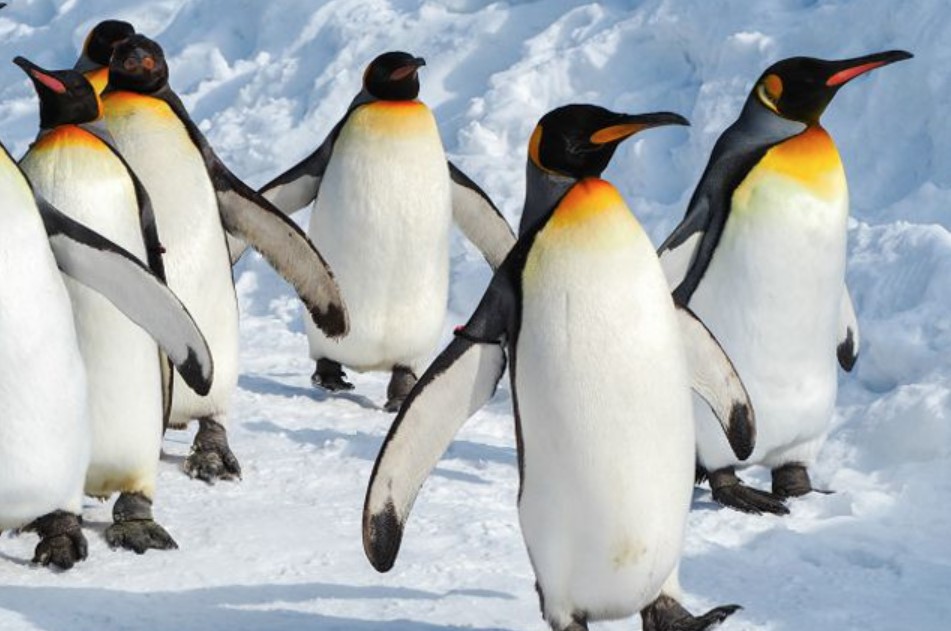 The main population of penguins is concentrated in Antarctica and the surrounding islands. They rise along cold currents and further north along the coast of South America (up to the Galapagos at the equator), Africa.

Penguins are surprisingly adaptable to extreme temperatures. This is primarily a thick layer of fat (up to 3 cm), the absence of bare skin areas (the entire body of the penguins is covered with three-layer plumage), the “backflow principle” (responsible for minimizing heat loss in the extremities). But in the “northern”, water birds are warmer, on the contrary, the wing area is increased to increase heat transfer, as well as there are no feathers on their heads.

Unusual in penguins and bones. In all birds, they are light, tubular, and in penguins – without cavities, like dolphins and fur seals.

The muscle frame is also specific. Penguins, like flying birds, have a strongly developed keel, but besides it, the scapula and the corresponding muscles are responsible for the upward movement of the wings (this is due to the peculiarity of the environment – the density of water).

The breeding of emperor penguins is very interesting. Back in March, they begin a long and arduous journey 200 km deep into Antarctica. There, after courtship, the females lay one egg at a time and go back to the ocean. And males remain with an egg on their paws, covered with a skin fold. For nine weeks, they are in frost-60 degrees and under gusts of wind up to 480 km / h. Males in a group are constantly moving, changing places, getting warm. All this time – 9 weeks – the male is starving until the female appears. After that, the parents take turns feeding the chick. Interestingly, in many penguins, females lay 2 eggs, but the former is usually larger, the chick hatches earlier and receives more attention from the parents. The second egg and chick are like insurance in case the first egg does not hatch or early death of the older chick.

And another interesting story happened in the zoo in Bremerhaven (Germany). One of the pairs of penguins there has been together for over 10 years. And so the zookeepers planted an egg thrown by their biological parents. The foster houses, however, perfectly hatched the chick and take care of him tenderly. It would not be so surprising if it were not for the newly-born parents themselves – two males make up a couple. Now they are happy not only together, but also with the chick. Zoo workers plan to continue to use this pair as good and loving parents.