Pomeranians are very cute, miniature decorative dogs. They have a very lively and inquisitive disposition, adore active games, and will become a real companion for their owner. With this breed, certain self-will is inherent, because of which the upbringing of a pet should be started as early as possible. Otherwise, you can get an uncontrollable, non-socialized dog that does not want to obey the command of the owner. 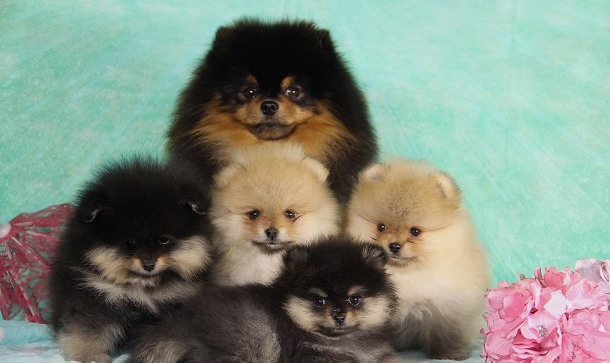 Today, Pomeranians are decorative dogs that do not carry any specific work functions. That is why it is difficult to believe that Spitzes were once draft dogs. Along with other sled dogs, they transported goods over long and short distances.

Before being recognized by representatives of the nobility in the Middle Ages, Spitzes were much larger and performed the function of guarding livestock. A kennel for such a pet was built on a pile of manure so that the animal was warm in cold winters. This rule led to the fact that animals were called “dung beetles” for a long time.

It is known for certain that the Queen of England Victoria had as many as 6 pets of this species. They quickly won the trust and love of the nobility around the world and became decorative dogs that were bestowed with various honors.

Important! Pomeranian dogs were two of the three lucky survivors of the Titanic cruise ship crash.

Miniature dogs are often called “little Napoleons”. This is due to their punchy disposition. Despite their diminutive size, these dogs can rush into a fight even with an opponent much larger than him. If it becomes necessary to fight, the Spitz will not hesitate to enter the fight.

Pomeranian dogs are very smart. They are easy to train and can carry out many difficult commands. There are cases when dogs of this breed even worked as rescuers. The main thing is to start training on time and provide the animal with competent education.

The origin of the breed is shrouded in many secrets and legends. One of these is the presence of Spitz at the ceremony of presenting gifts by the Magi at the birth of Jesus Christ. Other dog breeders who adore Pomeranians claim that miniature dogs lived in the days of the pharaohs.

In Russia, Pomeranians appeared only towards the end of the 19th century. At this time, they were already a well-known decorative and very expensive breed. Only noble citizens could afford to keep them in the house.

For many years, such pets were purposefully destroyed, considering them to be defective, dwarf dogs. This opinion was specially developed in Germany. Puppies of this breed were mercilessly destroyed. Thanks to the granddaughter of Queen Victoria of England, the breed was strengthened and replenished with representatives.

Today the Pomeranian is very popular. They still have a decorative function, but today anyone can afford a puppy of this breed. Before buying, you should definitely study the peculiarities of raising and caring for an animal.