Earlier, back in ancient times, when the pug breed of dogs just appeared, the color of the pet was everything. If the animal was distinguished by beige hair, it was loved and revered like a little deity. But black pugs were exterminated, considering it a curse. Today, the attitude towards the colors of dogs is much simpler, no one considers the dark color of the coat devilish, and beige – divine. 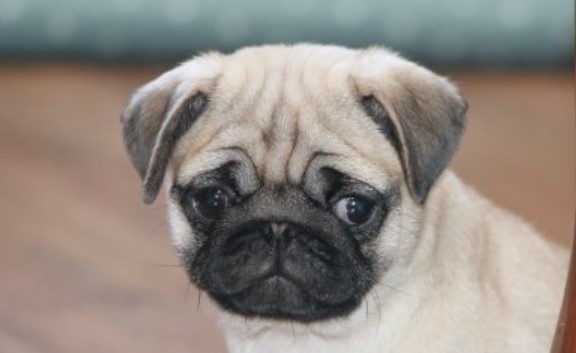 According to historical references and records, a breed that looks like pugs existed in ancient China. First, plump, but nimble dogs were used as hunters for small furs and rodents, and then they became the favorites of the emperor and cost fabulous money. But this privilege was awarded only to pets with a beige coat.

Important! The folds on the dog’s forehead imitated the imperial sign, so the pet was very honored, some of them even had their own servants and many indulgences.

It is also known that at that time there was no clear separation of the Pekingese and Pug breeds. There was one variety of pets, which was divided into 2 types, with long hair and short. According to another version, the dogs are of African origin, but this fact is less likely.

The beige color of the pet’s coat is recognized as the standard and has several shade options. This is the most common color among the representatives of the breed, which can be found everywhere.

Among the standard colors are:

All of them, despite the differences in color, have a friendly character with notes of stubbornness inherent in this breed. Such animals have the opportunity to conduct an active exhibition activity and take part in selection if they do not have other disqualifying signs.

According to the standard description, a pug dog should have a muscular, strong body with short, straight, and strong legs. The tail is twisted into a ring or 2 rings, the ears are drooping, slightly raised at the base on the cartilage.

As for the color, despite several different shades, all representatives of the beige subtype should have a coal-black muzzle, as well as brown big eyes. It is noteworthy that the proteins should not be visible. The presence of black and white hairs on the pet’s body is also not allowed.

Pugs are very attached to the owner and love leisurely walks around the city, travel. They will require constant attention, even if only to lie on the couch together. In families with small children, they behave perfectly, starting naughty games and taking a direct part in them.

The only drawback of the breed is the stubbornness of these animals. If they want something, they will try to achieve what they want at any cost. At the same time, pugs eat a lot, if they are not stopped in time and protected from the use of unsuitable foods.

Other Types of Colors

According to the standard, there are 4 permissible colors for the representatives of the breed. In addition to the 3 shades of beige, the standard colors include charcoal black. However, non-standard colors such as brindle, completely white, chocolate or silver are also very popular.

In any case, no matter what color is chosen, the pug will bring a lot of happiness and laughter into the house, touching all the household with its appearance. Playful games and joint felting on the bed are just a small part of the entertainment with a little companion.