West Highland White Terrier is a breed of small dogs, once bred in Scotland to hunt foxes and badgers. Today they have successfully mastered the role of family dogs and companions, but they are not decorative. According to the FCI classification, the breed belongs to group 3 – Terriers, 2 sections – small terriers (without working tests). The breed became especially popular after the release of the film “Asterix and Obelix”.

All Terriers of Scotland: Cairn, Scottish, Skye, and of course West Highland White are branches of the same tree. In the harsh rocky terrain, for hunting games such as fox, badger, wild cat, they used small dogs with short paws, which deftly found and penetrated the den between the stones, focusing exclusively on scent in complete darkness. The task of the Terrier was to penetrate the animal’s burrow, drive it into a dead-end and hold it until the hunter appeared, and if he had to engage in a fight. The word “terrier” from the Latin Terra – “earth”, so sometimes Terriers are called earthen.

The first mention of white wire-haired small terriers dates back to the 13th century, but targeted breeding began only in the 19th century. The most popular at that time were Cairn and Scottish Terrier. It is believed that the West Highlands originated as a result of their systematic crossing.

The founder of the breed and the author of the name can rightfully be called Colonel Edward Donald Malcolm (1837-1930) from Argyllshire. He had a real kennel for miniature white dogs. This color was not chosen by chance. Hunters often made the tragic mistake of confusing their brown terriers with a wild animal, and the white fur coat is clearly visible in the conditions of tall grass and mountains. In parallel, three families were bred white terriers, each line bore the name of their possessions: Poltalloch, Rosenite, and Pittenuim Terriers. Subsequently, they became the basis for the formation of a single type.

In 1904 the West Highland White Terrier breed was recognized by the English Kennel Club. A year later, two breed clubs were opened in Scotland and England, and then another one, the Nordierland, which became the favorite, joined them. The joint efforts of the three organizations managed to consolidate the type and create stable heredity. 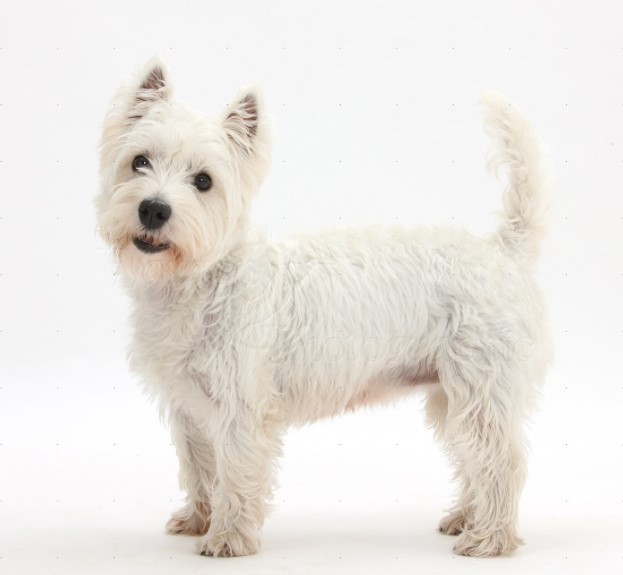 The West Highland White Terriers are strong-built small dogs with a deep chest and well-developed muscles. Their appearance perfectly demonstrates the combination of strength and energy. Weight ranges from 6-10 kg, and height – 23-30 cm. Males are slightly larger and more powerful. The movement of the dogs is free, light, and straight in any direction.

The skull is slightly convex, with a smooth contour and slight tapering from the base of the ears to the eyes. The distance from the eye sockets to the occiput is slightly longer than the length of the muzzle. The head is approximately at right angles to the axis of the neck. A well-defined stop is formed by developed superciliary arches and a slight depression between the eyes, but the muzzle is well filled in this place. The jaws are straight and strong. The nose is large enough, the black lobe does not protrude forward. The eyes are medium in size, dark in color, set well apart. Small ears are erect. The teeth are large enough in relation to the overall size of the mouth, the bite is correct.

The physique is compact. The backline is straight. The loin is wide. The chest is deep. The neck is long enough, thickens towards the base. The limbs are short, strong, and well-muscled. The front feet are rounded, larger than the hind feet. The nails and paw pads are preferably black. The tail, 10-15 cm long, is covered with coarse hair, carried straight, and does not fall below the back.

The coat is double, formed by a hard guard hair without curl, 5-7 cm long, and a more delicate short undercoat, rather soft, tight over the body. The hair on the head and legs is longer than on the body. The color is exclusively white, a light wheat shade is allowed. 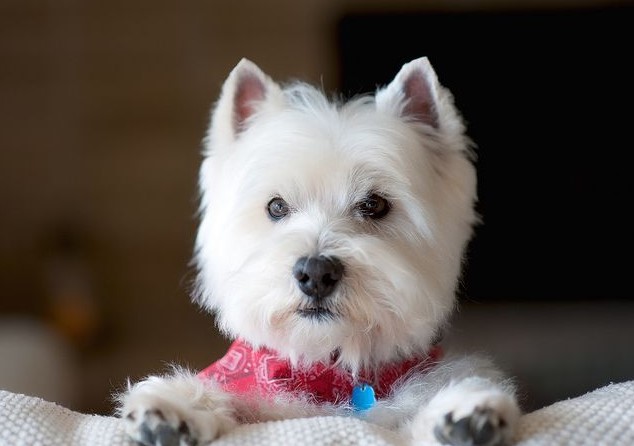 They say that if a person has a West Highland White Terrier, he does not need a big dog, because the Terrier is sure that he is a huge dog. The West White Terrier is very diverse, hardy, cunning, energetic, and exudes optimism, can be playful or quiet depending on the mood and environment. Sociable and very intelligent. This is a small person who loves to be in the spotlight. West is great for families with older children, they are rarely willing to be patient with the pranks of babies and are unlikely to agree to the role of a plush toy. It is very difficult to predict what cohabitation with other animals will be. Often, Terriers are jealous, and conflicts can arise on this basis. It is not the best option to keep a hunter and potential prey in the same apartment – a small animal or bird. They rarely have friendly relations with cats, but a peaceful neighborhood is possible.

Small Terriers are independent, this is especially well manifested on the street, while they are quite friendly and rarely initiate conflict. Always cheerful, curious, and unusually brave. Security qualities are not compatible with the size, but as a watchman, the West has no equal, he will warn about the slightest danger with a loud sonorous bark. Favorite activities of the Highland: looking for a trail, barking, and digging in the ground. These habits are especially difficult to wean. In general, these are smart and intelligent dogs, with proper education they rarely have problems. 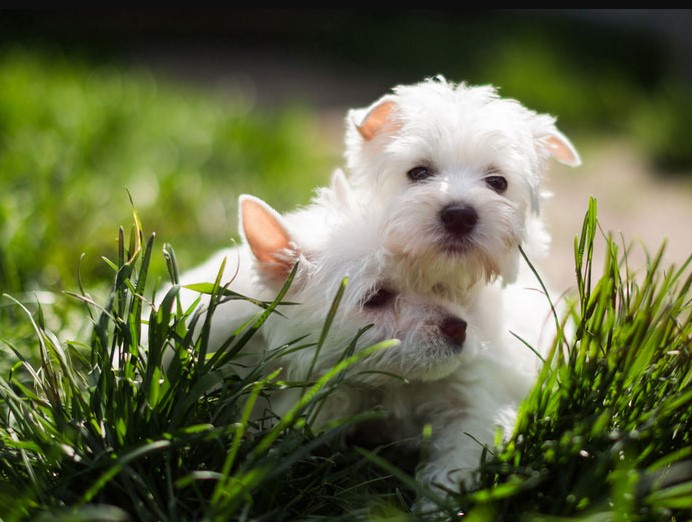 Grooming a dog is difficult if the dog must always look good. The treatment consists of regular brushing (about once a week), trimming and haircutting (every two to three months), and bathing with professional cosmetics (once a month). Examine your dog’s ears regularly and clean them of any debris as needed. Be careful not to get hair in the eyes and irritate the cornea. Be sure to brush your dog’s teeth to prevent plaque and calculus 1-2 times a week. 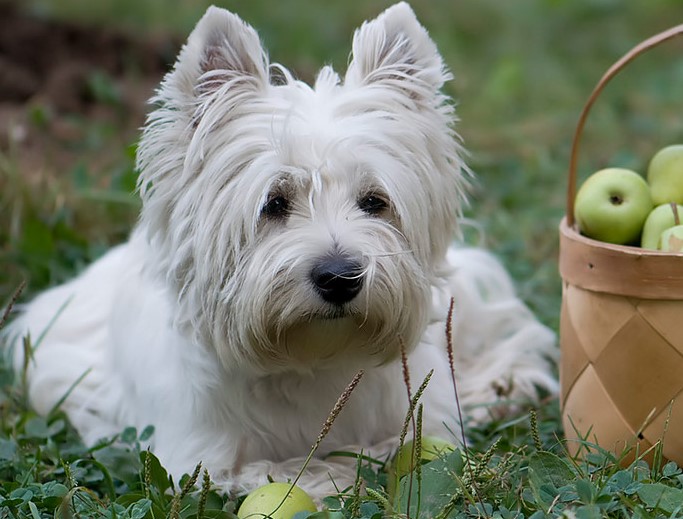 West Highland White Terriers rarely complain about their health. They are quite strong, hardy dogs with good immunity. However, they have their own hereditary diseases and predisposition to a number of ailments. Dogs are susceptible to allergies, more often to food, various dermatological diseases, and are susceptible to parasite bites. They often suffer from dental calculus, diseases of the oral cavity, and ophthalmic diseases. Hereditary diseases include:

An important health issue is a prevention: timely vaccination, deworming, and treatment against external parasites. The average life span of the White Terriers is 14-15 years.