Whether parsley, basil, or chives: Herbs are a popular addition to your own garden or balcony. But while freshly harvested herbs refine what we humans eat, the fragrant green plants can quickly become dangerous for cats. Excessive consumption of poisonous plants and herbs can cause side effects such as symptoms of poisoning in the cat. In this article, you will learn which herbs your cat can safely eat and which are unsuitable or even poisonous for the house tiger. We also give you valuable tips for your own herb and cat garden.

Contents hide
1 Herb Garden for Cat
2 Parsley: Cats Should Avoid Them
3 Basil: Cats Don’t Care
4 Does the Cat Like Rosemary?
5 Lavender: Cats Rarely Like the Scent
6 Sage, One of the Medicinal Herbs for Cats
7 Dill: Cats Know It From Their Food
8 Chives: Get Your Cat’s Paws Off!
9 Valerian: It Stimulates Cats
10 Buying Catnip: a Good Idea!
11 Cat Gamander Creates a State of Intoxication 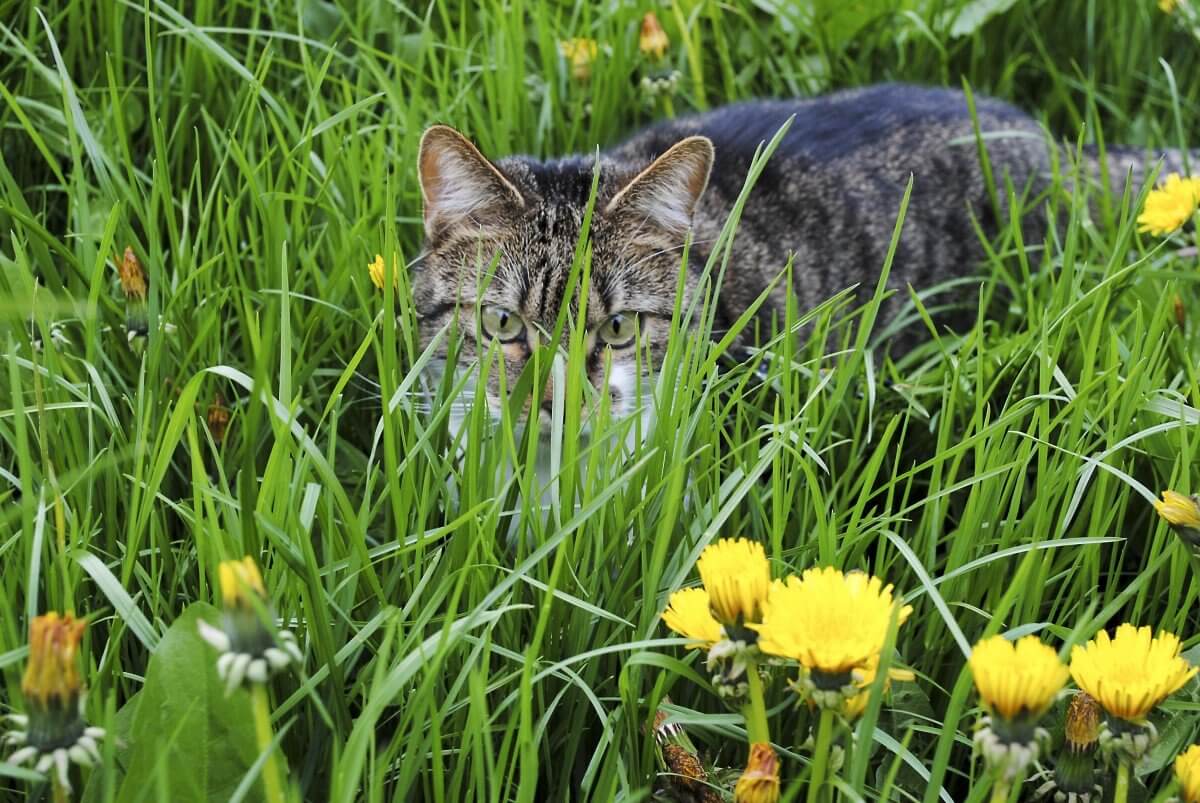 In many households, the most popular herbs can be found freshly harvested in the kitchen, on the windowsill, on the balcony, or in the garden. Many herbs are tempting for cats, as they – similar to cat grass – grow tall and green at the cat’s head level and the house tigers can nibble on them optimally. But which herbs are poisonous for cats and which herbs are kitties allowed to nibble on? We have summarized the most important herbs and their effects on you.

Parsley: Cats Should Avoid Them

Parsley is slightly toxic to cats. The contained substance oxalate has a diuretic effect in higher doses and can lead to poisoning. The cat will nibble on the parsley every now and then, but there is no danger. Therefore, you can plant the plant without hesitation. Small amounts of parsley in cat food are also not poisonous, but this should remain the exception.

Basil is one of the most popular herbs in the kitchen. For cats, however, the plant is rather uninteresting, which is due to its large, non-grass-like leaves. The smell of the plant also keeps cats away, as basil contains essential oils that are not popular with cats. If the cat nibbles on the plant anyway, don’t panic. Small amounts of basil are non-toxic to cats.

Rosemary also has a strong odor due to essential oils that not every cat likes. If your cat likes the smell, don’t worry as the herb is considered non-toxic. Rosemary is even said to keep fleas away from cats.

Lavender is considered harmless to cats. However, the strong smell of the fragrant herb prevents many cats from nibbling on the plant anyway. If the scent doesn’t bother your cat, you don’t have to worry, because the plant is not poisonous as long as it is not consumed in large quantities.

Sage, One of the Medicinal Herbs for Cats

Sage is safe for cats. The herb is considered anti-inflammatory and antiseptic not only in humans but also in cats, for example with colds. If the cat has a cold, sage can be inhaled to alleviate the symptoms. Occasional nibbling on the leaves of the plant is also not harmful, despite the essential oils it contains.

Dill: Cats Know It From Their Food

Dill is also one of the herbs that you can safely plant in your garden. In fact, some types of cat foods are even refined with dill, as the herb is said to have a calming effect on the stomach. There is therefore no risk of poisoning with this plant.

Chives: Get Your Cat’s Paws Off!

Chives are one of the most popular herbs. But the plant can cause severe poisoning in cats. Like all leek and onion plants, chives contain sulfur compounds, which can be harmful to kitties even in small amounts.

If you want to do something good for your cat, you can create your own garden with herbs for the cat. The following herbs are not only non-toxic but also have a particularly stimulating effect on cats, putting the house tiger in a state of intoxication – without any harmful side effects. The cat garden can also prevent the cat from eating the forbidden herbs in the kitchen.

It is no coincidence that many cats know valerian from their toys. Because the herb, which smells rather unpleasant for human noses, has a stimulating effect on cats, similar to catnip. While the herb has a calming effect on humans, most cats are thrilled the moment they smell valerian. The reason for this is the valeric acid contained in the herb, which is believed to be similar to pheromones in cats and therefore puts them in a state of intoxication. Most cats only sniff valerian, but swallowing it is also harmless, as the plant is non-toxic for house tigers.

Catnip lives up to its name as it is one of the most popular herbs for cats. Whether dried in toys, as a concentrate in sprays, or as a fresh herb in the cat garden: Cats love to rub or roll over catnip. The scents have a stimulating effect on cats and they are encouraged to play. Therefore, many cat toys also contain catnip, which is also known by its English name of catnip. Although the herb has such strange effects on cats, it is completely safe. However, you shouldn’t treat your cat too often with catnip, otherwise, it will get used to it and lose interest.

Cat’s gamander is a thyme family. The herb – like regular thyme – is very popular with cats. Many cats like to rub against the twigs and become intoxicated similarly to catnip.