Some animals are really hard to survive in the wild. Unsurprisingly, certain species use whatever they have to stay alive in this cruel world. Among other things, it should be noted that representatives of the fauna actively use various types of mimicry as a defensive strategy. And while it seems to us that powerful animals like tigers at the top of the food chain don’t need the tricks of self-defense, this is a misconception. In the case of tigers and many other felines, mimicry takes the form of false “eyes” on their ears. 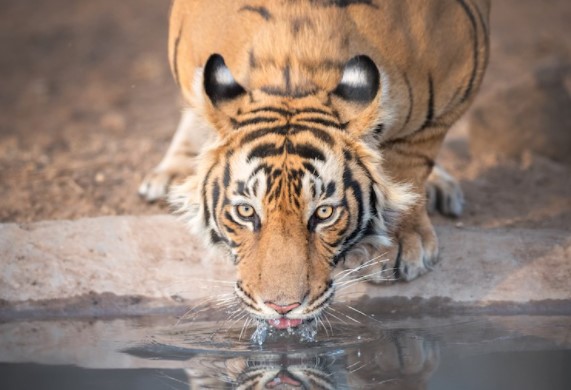 You’ve probably seen that these striped predators have white ear markings. They are usually invisible, but if you look from a certain angle, you can see big eyes. This type of mimicry is actually quite common and is not only found in big cats. Butterflies and peacocks are some of the most famous examples of the owners of such trompe l’oeil.

However, scientists cannot agree on exactly how this mimicry works in tigers. One theory is that markings help protect mammals while they drink. This moment is considered one of the few situations where a predator is truly vulnerable. When licking the water, tigers tend to pull their ears back, and when they bend over, the spots appear to be big eyes. Other creatures will not dare even approach the powerful animal, thinking that the tiger is on guard.

The second theory is that eye markings on tiger ears are not a defense mechanism at all, but a form of aggressive communication. When these representatives of the feline family are in danger, they turn their ears forward, showing white spots, as if warning the opponent that it is better not to mess with them.