The Airedale Terrier is a British black-backed hunting dog breed, bred for baiting river rats and otters. It is distinguished by increased emotionality and an elegant exterior: a neat, stylishly disheveled beard and coarse hair all over the body.

The Airedale Terrier is a positive energetic joker who is difficult to cram into frames, but with whom it is quite possible to agree on peaceful coexistence. The pronounced independence of animals, inherited from the terrier clan, can cause certain inconveniences to the owner, so opponents of any difficulties should prefer some spineless decorative creature to the representative of this breed. 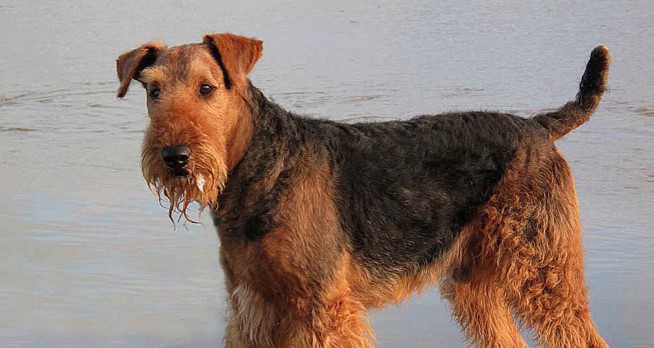 But you really won’t get bored with the airedale, so if you urgently need an active companion with your own views on life in general and friendship in particular, take a closer look at this bearded “meteor”.

The hair of the Airedale Terrier needs to be brushed once or twice a week, and this will be sufficient. Always keep your pet’s ears clean. The nails are usually trimmed three times a month, and the dog is bathed at least once a week.

A dog of the Airedale breed needs education and training, both because of the need to form the correct character and the development of obedience and because of the high energy, which simply needs to be put somewhere. The owner must show consistency and consistency, and training should not be monotonous, otherwise, the dog will quickly become bored and will have to be forced. 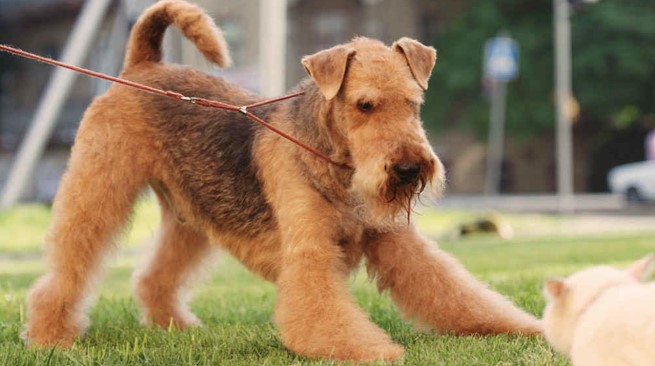 In any case, you must, on the one hand, be strict, and on the other hand, do not go too far and have a good sense of humor combined with patience. The Airedale dog breed can be trained both in basic commands, this is mandatory, and more complex, depending on what is required of it. It should be noted that the breed often takes part in various canine disciplines at exhibitions.

The first obedience lessons are taught at home, in a familiar, relaxed atmosphere. The puppy must understand that now you are its leader, and independence and self-will are now over. Sometimes the owners of teenage dogs complain about the mistrust and cowardice of their dogs. Don’t worry, this is normal behavior for a 3-6-month-old Airedale. The so-called passive-defensive reaction is characteristic of many growing dogs, but it never turns into a character trait, disappearing without a trace as the animal grows up.