He loves to warm up on your lap or cuddle with you under the covers. He is very affectionate and dependent on his family. However, he is also a very active, spirited guard dog and a good watchdog with a distinctive nose. The willingness to protect one’s family and territory from invaders knows few bounds. 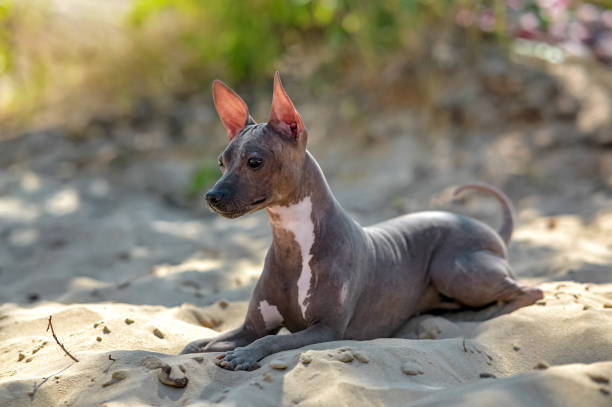 That’s why you often have to make it clear to him that most visitors do not pose a threat. But he also tends to bark once too much. However, this quirk can be gotten under control with an equally loving and consistent upbringing.

The American Hairless Terrier generally does not cope well with change, which is why it is best to join its later family as a puppy and not only when it is middle-aged. When it comes to its owners, it strives to do everything that is asked of it. However, he can also be very stubborn at times.

The Little Bundle of Energy

The American Hairless Terrier is a bundle of energy that is running around almost constantly. He, therefore, needs his daily exercise outdoors and enjoys long walks. He also likes to dig holes. Where he shouldn’t do that under any circumstances, it’s better to keep him on a leash. He also loves challenging games where he can put his skills to the test. If the desired attention is missing, he barks extensively.

American Hairless Terriers at a Glance

The small dog breed at a glance:

When dealing with other animals such as other dogs and cats, he is very social, at least as long as they are also part of the family. He often does not get along well with smaller dogs and birds and has to be trained first. Dealing with responsible and experienced children is an enrichment for both sides. When the human offspring is old enough, it makes a perfect playmate for the terrier – and vice versa.

The most striking thing about the American Hairless Terrier is of course what is missing compared to other dog breeds: the coat. Its skin can be marked with any color, giving an idea of what the dog would look like with hair.

The American Hairless Terrier is 24 to 35 centimeters tall and weighs three to five kilograms.

Since he has no fur, brushing is of course canceled. In addition, there is no problem with flying hair, which makes this terrier a perfect companion for allergy sufferers.

This is How the American Hairless Terrier Came about

The American Hairless Terrier is descended from the Rat Terrier, more specifically from a specific specimen that was born as a hairless puppy in 1972. The Scott family of Louisana developed the current breed from this, which was recognized by the United Kennel Club (UKC) in 2004 and by the American Kennel Club (AKC) in 2016.